Sonny Bonds Journal Entry 4: “I can’t quite believe I’m writing this, but…Jessie Bains…The Death Angel…is dead! Keith and I followed a lead from the Steelton Police Station that Bains had made a phone call from the public phone at Burt Park. It was there I discovered a manhole, and following my intuition, plunged down into the sewers in hope that Bains might be hiding down there. A short while later I walked through a door to find Marie alive, but strapped to a chair! I released her, and then managed to shoot Bains as he entered the room. The bastard won’t be causing any more trouble for anyone and I couldn’t be happier. In fact, Marie has agreed to marry me, making this day the happiest of my life. It doesn’t get any better than this!” 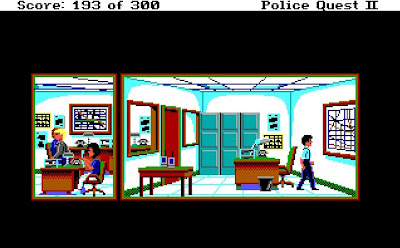 On arrival to the Steelton Police Station, I was quickly directed to the Lieutenant’s office. He told me that Bains had already got to Colby, who was found with a bullet hole in his head. They had no solid leads, but they did know that Bains made a threatening call to Colby from the public phone in Burt Park. They’d already thoroughly checked out the park, but we were welcome to go back in and see what we could uncover. Detective Pitman would accompany us to the park, since we had no vehicle of our own to use. Before leaving, I noticed two speaker shaped devices on the table. When I looked at them, I discovered they were walkie talkies, so I took them with me. 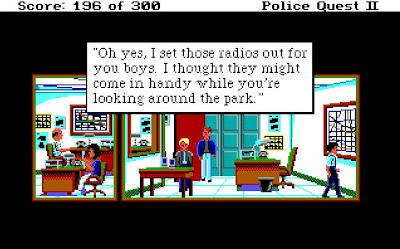 Well, why didn't you say so!

As soon as we reached the park, Pitman was called to a burglary, leaving Keith and I to investigate on our own. We decided to split up, and the first thing I did was check out the phone box. It was only then that I realised I wasn’t able to check for evidence since I didn’t have my field kit. To make matters worse, the field kit was in my car back at Lytton airport! I hadn’t thought to take it with me as I wasn’t at all sure that I wasn’t going to be able to get back to it if needed. I had a decision to make! Should I restore back to the airport, get the field kit, then go through the whole ticket purchase and hijacking ordeal all over again? Or should I cross my fingers and hope that the field kit isn’t required for the rest of the game? 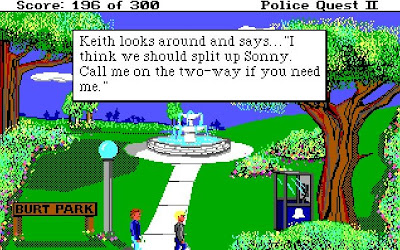 I decided to go back and get it. I couldn’t imagine I wouldn’t need the field kit again, especially as I only had 196 points out of a possible 300. It only took me about ten minutes to get back to the park with the field kit, but I was still a bit pissed off when I tried to use it on the phone. “In the confusion, your kit was checked on another plane, and you don’t have it.” So I didn’t need the kit and all my efforts were for naught. Oh well, time to get on with it! The park was made up of five or six screens, which I carefully investigated before trying anything. There were only three things of interest that I could find there: a mugger, a dog, and a manhole. 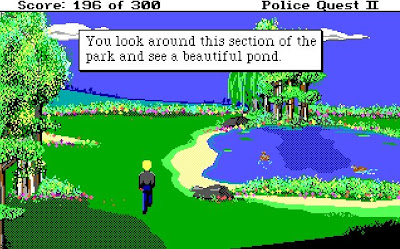 The mugger approaches on any of three or four screens, and demands you hand over all your cash. The first couple of times he tried it, I tried taking him down in various ways. I actually drew my weapon and shot him out of interest, at which time I got a game over screen showing a newspaper with my name splashed over the front as having gone on a murder spree. If I drew my gun or my badge, the mugger would immediately turn around and bolt in the other direction. I eventually tried “use radio” as soon as he left, and that turned out to be the right thing to do. Keith got my message regarding the mugger, caught him, and brought him to me cuffed. I searched and questioned him, and then Keith took him to the station. 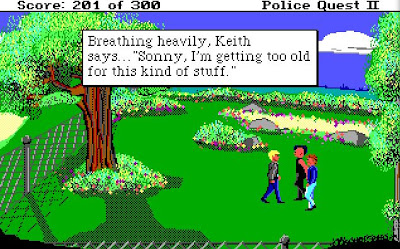 Nice Lethal Weapon reference. It's amazing that movie came out a year before this game!

As for the dog, I couldn’t see anything I could do with him. He runs around the screens and any attempts to catch him failed. The manhole was fairly well hidden, but easily discovered by simply typing “look”. “The park is pretty this time of year. The air is sweet and clear, except near the manhole cover.” If it wasn’t for that hint, I never would have found it. Down the manhole I found myself in the sewers. It was a nasty place to be, with missteps causing me to drown in human waste. There were some nasty little traps down there, including pipes that blew waste at me and made me fall to my death, and methane gas pockets, which killed me if I stayed too long within them. After a few screens I finally came across something I could interact with. 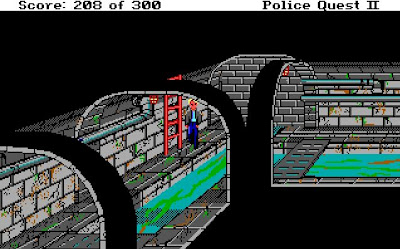 Hmmm...let's hope I don't have to collect twelve keycards down here

There was a ladder leading up out of the sewer. There were still places I hadn’t yet explored in the sewer, but I decided to head up the ladder to see where it led. Unfortunately, I wasn’t able to open the manhole at the top, and apparently made a lot of noise in the process. When I climbed back down, Bains came flying onto screen and shot me dead, alerted to my presence by the noise. I suddenly realised that I was in all likelihood very close to finishing Police Quest 2. Was this where Bains was hiding? Was I about to have the final confrontation? The short answer is yes! Around another couple of corners I found a door, which I eagerly entered. 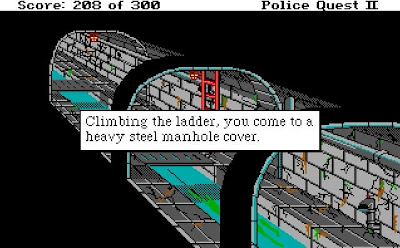 Inside I found Marie, strapped to a chair, but no Bains! She was trying to tell me something, so I quickly removed her restraints and uncovered her mouth. She was so happy to see me that she squealed and hugged me in delight. This of course attracted Bains, who once again came in and killed me. As had happened on other occasions, the game over screen told me the solution to the puzzle. “Next time try to calm her before untying her.” I get the feeling that the creators gave players hints to the more confusing or challenging puzzles in the death scenes, perhaps during the play-testing period. I can’t say for sure whether I would have tried “calm Marie” if the game hadn’t told me to. Maybe! 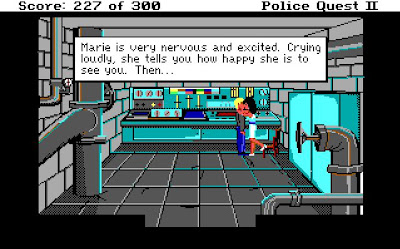 ...she slowly began to unbutton her top? No? Wrong game?

With Marie calm when I ungagged her, she whispered how happy she was to see me instead of shouted it, and then told me she could hear Bains coming back. I hid behind a tube, and when he was close enough, I shot and killed him! I couldn’t quite believe that Bains was actually dead. I mean, these games often end with the villain getting away, or at least being put in a position that they might one day be able to escape and have their revenge. Not this time. The Death Angel was dead, and I was victorious. Now the only question was whether the shooting review board would find that I’d unlawfully killed Bains or had acted in self-defense. 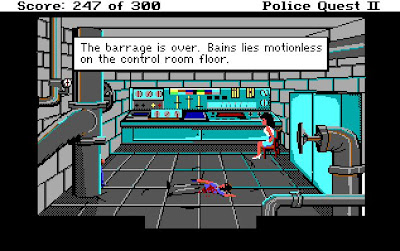 Couldn't have happened to a nicer fellow!

This is where perhaps evidence comes into play. I wonder what would have happened if I’d failed to find any evidence that Bains was involved during the game. Perhaps I would have been found guilty and stripped of my position? Perhaps I would have done some time of my own? Could I have arrested Bains without killing him? I didn’t even try! In my case, the board concluded that the killing was totally and unquestionably legal and justified. Not only that, I also received a Silver Commendation Award for superior effort and performance while engaged in a life-threatening situation, and given a two week “Rest and Relaxation” holiday. 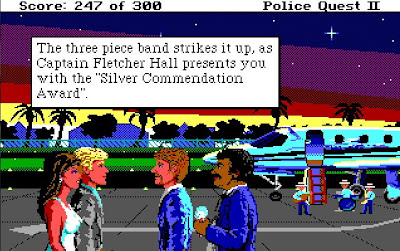 Seriously, does that dude ever not have an icecream?

Police Quest 2 finishes with Sonny asking Marie to marry him. She of course says yes, and they fly off into the sunset. A very satisfying, if not devoid of cliches, ending on all accounts! Well, that’s another game that can be ticked off the list! At least it can be once I apply the PISSED rating to it. The game was staring a sub 50 score in the face after my first session, but it has recovered so well that now I’m genuinely interested to see how far up the leader board it can go. I can’t ignore the flaws, but the story, the puzzles, and the innovative way that evidence is handled throughout the game make it an enjoyable adventure game that successfully builds on its predecessor. 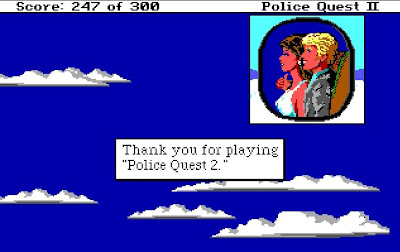 That's quite alright. Thanks for making it!

Before I end this shorter than usual post, I wanted to draw attention to the fact that The Adventure Gamer blog is about to go over the 100000 views mark! It seems like only yesterday that I was celebrating 50000, but in truth it was almost exactly three months ago. To celebrate, I’m looking to give out some CAPs. As usual though, I’m going to make you earn them.

Anyone that emails me an photo of an open beer (or some other beverage of choice) with a note next to it that says “Celebrating 100000 Hits”, and signs it with their blog name, gets 20 CAPs! If anyone manages to take a screenshot that proves they were the 100000th viewer, I’ll give them 50 CAPs. The view tally is at the bottom of the menu system, and you’ll need to tell me the exact time it happened too (I'll be watching), just to confirm you haven’t photoshopped it. Never have this many CAPs been thrown around, so make the most of it! I have a bad feeling that all this CAPs are going to come straight back at me to make me play Emmanuelle in 1989. ;)

Email ThisBlogThis!Share to TwitterShare to FacebookShare to Pinterest
Labels: 1988, Police Quest 2: The Vengeance