Well, this should be interesting. I’ll skip the standard pre-PISSED pondering and jump in to see just how far up the leader board Police Quest 2 can go...

Puzzles and Solvability
It’s strange really. Whenever I read any of the short blurbs about Police Quest 2 on the net, they always seem to mention how the game placed even more importance on following exact police protocol to succeed than the original. Those comments are actually very misleading, as while there is a much stronger focus on finding evidence in crime scenes and more points are given to the player for following protocol, more often than not success can be achieved without paying any attention to that stuff at all. I missed heaps of evidence in the game, and I only needed to open the manual about twice during the whole game, a marked improvement on the first game. Rewarding extremely thorough players while giving some leeway for those players looking more for entertainment was certainly pioneering (I can’t think of any earlier games that did this to anywhere near the same extent). 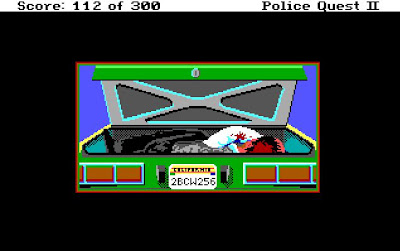 Pixel hunting with the parser actually requires using your brain

Just as in Manhunter, a fair bit of time was spent going through all the little bits of evidence I’d collected to find a way forward, yet unlike that game, the puzzles in Police Quest 2 appear to be created to fit in with the story rather than the other way around. But, as usual, it’s not all good! The beginning scenes of the game are extremely difficult, and gaining the first thirty points and getting out of the police station was harder than anything that followed. In particular, finding the business card in the car is not very easy, and finding the code on the back of it even harder. Don’t get me started on the storage bin positioning either. I’m sure that puzzle ended the game for many players over the years. More annoying than all of these those was the invisible five minute timer to get out of the station, and I'm dropping a whole point off the game for that alone. I also can’t ignore the presence of intentional endgame delayers, such as the gun sight adjustment drama that pops up during the plane hijacking, so I can’t go higher than a 5, despite being thoroughly impressed.
Rating: 5 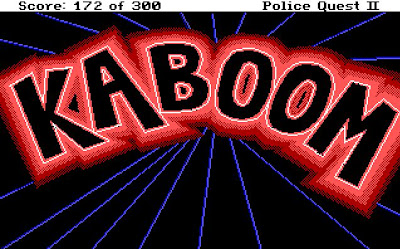 Not the right wire?

Interface and Inventory
The interface of Police Quest 2 is more than adequate when it comes to movement. There were very few climbing and obstacle issues to be dealt with, and while I did have a couple of minor incidents that required restores with Sonny getting stuck (if I stood in a spot that Keith wanted to move to when control was temporarily taken away from me, he would walk around the screen endlessly), I can’t recall any other dramas. There were however a few parser issues. Nowhere near to the extent I’d found in Larry 2, but I had significant trouble getting the code off the business card despite figuring it was there early on, and I also seemed to have problems whenever I tried to discuss mug shots with pretty much anyone. One surprising negative in the game was the inventory. After stacks of Sierra adventure games had very similar yet entirely functional inventory systems, all of a sudden Police Quest decided not to have one at all. Pressing tab brought up a “You are carrying...” message, but actually finding what I wanted in it became more and more difficult as the amount of items I had increased.
Rating: 5 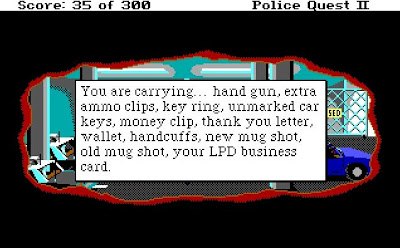 Why yes, I have one of those right here! It's just...um...hang on a second...oh it's here somewhere!

Story and Setting
There are two things I should say up front here. Firstly, I don’t have a lot of interest in police or detective stories. I’m much more a Game of Thrones / Walking Dead type of guy than a CSI / 24 fan. Secondly, I wanted Bains dead! Despite my genre preferences, the guys in charge of the Police Quest 2 story did a good job of making me hate the guy, and they even managed to make me care somewhat for Marie despite my reservations over her past profession. Yes, the whole thing is entirely shallow and cliché, following a similar plot to endless movies on DVD shelves, but it actually worked very well within the limitations of the adventure game trappings, and beats the majority of other efforts of the time hands down. The fact that I actually got the opportunity to kill the guy at the end, and that the event itself (and those that followed) were handled seriously, only added to the satisfaction. I even enjoyed the hijacking scene, despite how out of place and contrived it felt in an already action packed couple of days.
Rating: 6 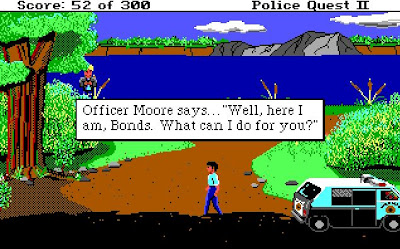 Well since you asked, I guess you can come up with a half convincing reason why I need to assist you scuba diving.

Sound and Graphics
For the most part I didn't really notice the sound when playing Police Quest 2. I was going to write something about how it was pretty much devoid of effects and music, apart from during the intro, the driving scenes and the short tunes that celebrate the gaining of points. But when I went back to a few scenes to make sure, I realised that wasn't entirely correct! There's probably no less sound than other Sierra games of the time, but it's really very subtle in this one, with effects only used to emphasise certain actions and a fair amount of moody background music during the darker scenes. When the theme music does kick in…well, it's of the distinctly eighties symphonic variety. It’s pretty awful, but I don’t really know whether it was intentionally awful, or whether it's just aged very badly. It could very well be a take-off of the many cop shows that were on TV during that time. Considering the quality of Mark Seibert's other work, I'm thinking it might have been. 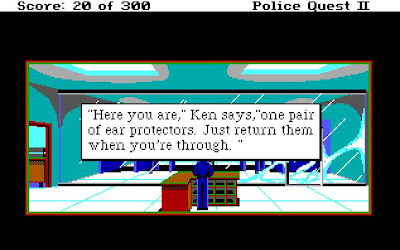 I don't know why I needed these ear protectors. The gun sounds like a breaking stick.

The graphics are far better than in the original Police Quest and probably on par with those found in Leisure Suit Larry 2, but once again I don’t think they quite meet the standard set by King’s Quest IV (nor does the sound for that matter). On the positive side, despite the shift from the AGI engine to the SCI one, the creators still managed to keep the game visually consistent. In hindsight, I was pretty generous with Larry 2 when I gave it the same mark as King’s Quest IV, but I can’t continue to be that liberal. Then again it seems a bit harsh to give the game the same rating as Gold Rush for this category. I’m starting to realise that this category is going to become quite difficult to score down the track. In all other categories I can compare new games to old ones without being unreasonable, but not this one. If I could give it 5.5 I would, so I'll round it up.
Rating: 6 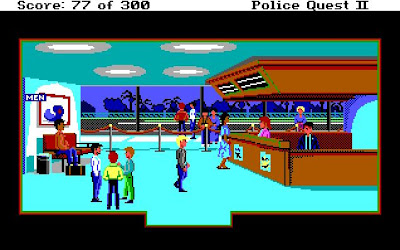 The graphics team didn't skimp on the detail, but why do they keep resorting to that horrible light blue!

Environment and Atmosphere
All up, Lytton is a fairly convincing place. Just as in the first game, Sonny ventures to many different locations in the city, giving the impression of a large, thriving community. The developers did miss an opportunity to increase this feeling by not having “extras” in very many scenes though. Sure, there are some other people standing around in the airport and seated on the plane, but pretty much none of them move or appear to be living their own life. Compare Police Quest 2 to Gold Rush (or even Manhunter to a lesser extent) and the difference is apparent. As much as I don’t think the omission of the top-down driving scenes from the first game damages the sequel, those sections also added to the overall feel of the original. But I’m nit-picking! The cinematic scenes (shootout by the river, scuba diving, plane hijack, motel booby trap) really pack a punch and raise the stakes, as does the story, with Bains always just one step ahead.
Rating: 6 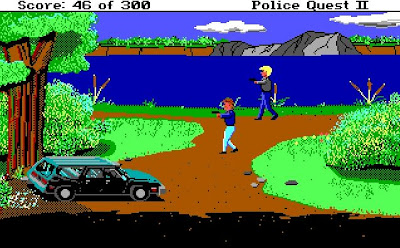 It's no action game, but Police Quest 2 has it's fair share of pulse-raising drama

Dialogue and Acting
While there are a few attempts at humour in the dialogue, the majority of Police Quest 2 contains the same police jargon heavy talk that was found in the first game of the series. There are lots of codes used while driving around that you can look up if you want to, but it’s not really necessary as it’s pretty obvious what’s going on. I can’t say anything stood out as exceptional or terrible, but I can’t discuss dialogue without mentioning the dodgy accents that pop up from time to time, particularly Officer Gelepsi. I’m not saying it’s a bad thing necessarily, and I have to admit to chuckling a little bit, but I have to wonder whether anyone would use such racially stereotypical devices today. I guess the reality is they don’t have to, as voice acting just seems far less offensive, unless it’s clearly a non-local slaughtering a country’s language and accent. In the end, the dialogue found throughout the game is fairly realistic, but in an entertaining way.
Rating: 6 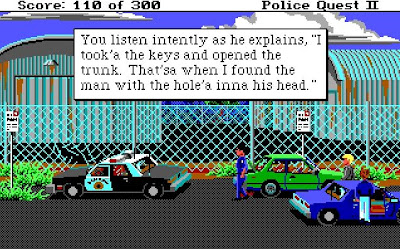 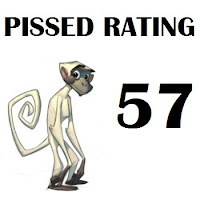 Shocked? So am I! Who would have thought that Leisure Suit Larry’s position as top Sierra game would be equalled by a Police Quest game? When I held the poll for which classic Sierra series was everyone’s favourite, the Police Quest series came in last with 5% of the votes. The reader-predicted scores for this particular sequel were all in the fifties, so I knew it wasn’t going to be terrible, but I’ve been pleasantly surprised. I don’t have any reservations about giving Police Quest 2 a higher score than the previous two SCI games. It’s a better game, with a much more satisfying story, and some great, thought provoking puzzles. Well worth your time if you can just get through the infuriating opening scenes.

Companion Assist Points for Police Quest 2: The Vengeance
It’s time to dish out (and perhaps deduct) some points for those that predicted things and assisted me along the way.

That's a lot of CAPs! I hope you spend them wisely!

Canageek and Ilmari: I'll spend a bit of time tomorrow figuring out how many CAPs Ilmari has earned since your arrangement. I totally forgot about that!
Posted by The Trickster at 20:59