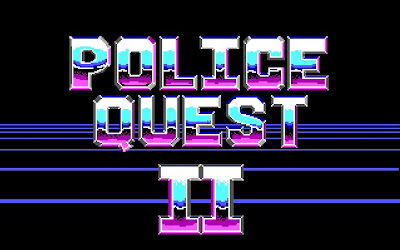 No, we haven't gone back to CGA! It's just someone's bad idea of a joke.

After spending the last week in a role where I was expected to hunt down the human rebellion on behalf of an invading army of aliens, gearing up in my police uniform to protect and serve the community of Lytton seems a little unexciting in comparison.  However, I did enjoy Police Quest 1 quite a bit when I played it earlier this year, despite my qualms about the puzzles being based almost entirely on following strict procedures from the manual rather than any logical deduction on my behalf. I have no idea whether the sequel follows a similar procedural form of gameplay or whether it takes a more investigative and logical application approach, but either way it’s sure to be an interesting ride. 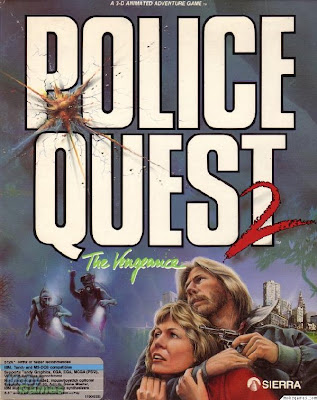 Please don't tell me the bad guy is Chuck Norris! I might as well give up now!

Police Quest 2 was the third game to showcase Sierra’s SCI engine after King’s Quest IV and Leisure Suit Larry 2. Former police officer Jim Walls was once again involved in the design of the game, including real life scenarios he faced during his time with the force, and making sure correct police protocol was used throughout. Apart from his involvement (and that of veteran programmer Robert Heitman), Police Quest 2 seems to have been a breeding ground for numerous programmers and animators, none of whom appear in credits prior to the game, yet do so on many that would be released in the years following. Of particular note are programmers Robert Fischbach (Quest for Glory I & II, Conquests of Camelot & the Longbow) and Jerry Shaw (Quest for Glory I- III, Gabriel Knight I & II) , and music composer Mark Seibert (Quest for Glory I-III, Space Quest III & IV, King’s Quest V-VIII). 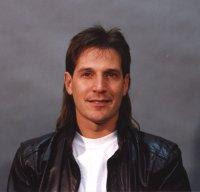 I’ll be playing the one and only PC version of the game, which I own as part of the Police Quest 1+2+3+4 collection I purchased from GOG a while back. The included manual has no background information on what has occurred between Police Quest I and II, and instead acts as a Homicide Officer’s Guide, suggesting I’ll be referring to it a lot in the coming days. It contains very similar information to the first game’s manual, including operation, arrest and investigation procedures, as well as radio, vehicle and penal code information. I know very little about the game itself, but a few readers have already suggested there are quite a few dead ends, so I’ll have to be extra alert at all times. I believe Officer Charles will be assisting me once again, but I’ll have to wait for my first briefing to see who else will be assigned to the case. Officer Sonny Bonds, ready for action! 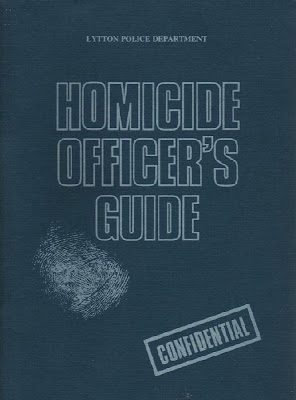 Do people really put CONFIDENTIAL on things like this? It only makes us want to read it.