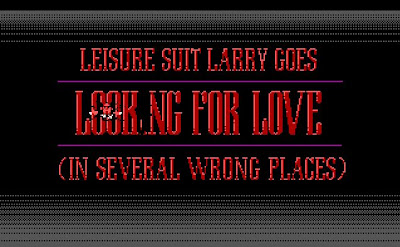 It goes without saying really doesn't it?

After just recently completing Sierra’s first game to utilise the SCI engine, King’s Quest IV, I’m immediately setting out to play the second, Leisure Suit Larry Goes Looking for Love (in Several Wrong Places). It’s the sequel to 1987’s Leisure Suit Larry in the Land of the Lounge Lizards, so from now on I’m just going to call the game Leisure Suit Larry 2. When I began this obscene task of playing through every notable graphic adventure game ever made for the PC, I can’t say I had high expectations for the Leisure Suit Larry series. The smutty adult natured themes didn’t seem like they would capture my interest and I figured I was also unlikely to be amused by the teenage boy comedy that the series is known for. Yet here we are after eighteen games have been ticked off the list, and the first Leisure Suit Larry sits very comfortably in second place behind Maniac Mansion. While I never thought I would be, I’m actually pretty excited at the prospect of trying to get Larry Laffer laid again, and to find out what hilarious stupidity Al Lowe (who wrote, programmed, produced, and wrote all music for the game) has lined up for me next. 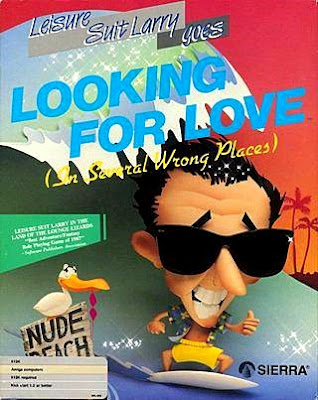 There are however a couple of things that have me concerned prior to setting off on my next journey. Firstly, there’s the numerous comments that have popped up over time that reference Leisure Suit Larry 2 as having numerous dead ends, many of which are reasonably unavoidable. Secondly, while I haven’t started playing yet, I was quite shocked by the game’s intro, which suggests the story of the sequel is far removed from that of the first. I’ll go into more detail in the first gameplay post, but the game appears to have taken a slightly science fiction approach, and the story involves an arch villain orchestrating evil plots from his underground lair. It will be interesting to see whether the game feels connected to the first in tone and style, or whether Al decided to take the character in a totally different direction, perhaps due to criticism of the highly sexual nature of the original. 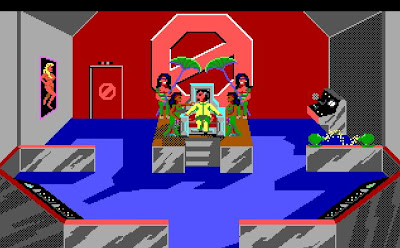 It's like Space Quest and Leisure Suit Larry combined

As I mentioned earlier, Leisure Suit Larry 2 was developed using the SCI engine, so the graphics and sound should have the same polish shown in King’s Quest IV. I look forward to hearing that catchy theme song without the dodgy PC speaker sound bringing the whole experience down, and can’t help wondering whether the quality of the women have improved at a similar rate to the technology used to produce them. We’ll all know soon enough! I’ve found a copy of the game and downloaded it (unfortunately GOG doesn’t have Leisure Suit Larry on the books yet for some reason), and found myself a PDF manual (from the ever reliable Replacement Docs site). The manual offers very little when it comes to story, apart from covering off what happened in the first game, but it is required to get past the piracy protection system. Strangely, I’ve started the game three or four times (trying to get a decent screen shot of the title page), and have been subjected to the same question each time. Hopefully I can just remember the one phone number, relinquishing my need of the manual altogether. Alright Larry...it’s time to put the suit back on and grace the ladies with your ever charming presence! 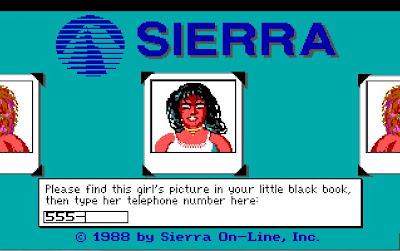 If he's already got the number of all these women, he ain't doing too badly!