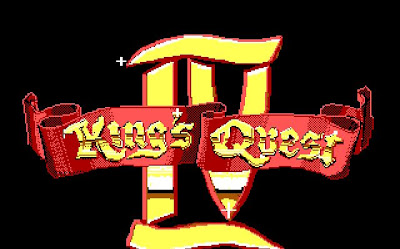 A game simply isn't fantasy unless it has roman numerals...

King’s Quest IV: The Perils of Rosella is the first of the King’s Quest series on the list that I haven’t played previously. For that reason alone, I’m pretty excited about getting into it. There are plenty of other reasons to be excited though, not least of all that the game is a favourite for many in a long and mostly successful series. More significant though is how groundbreaking it was on release, breaking down walls in both technological and storytelling departments. Roberta and Ken Williams deserve a lot of credit for creating some really enjoyable adventure games in the eighties and nineties, but they also deserve a massive amount of praise for constantly pushing the envelope and refusing to rest on their laurels for any extended period of time. They knew if they wanted Sierra to have any sort of longevity, they would need to continue to lead from the front in every way possible. 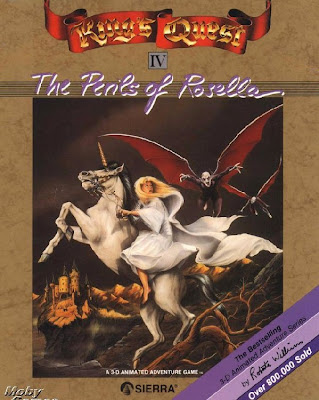 ...and in case there was any doubt, here's a unicorn, a princess, a castle and some sort of demon thingie.

The first thing to note about King’s Quest IV is that the protagonist is female. It’s regularly reported to be the first major graphic adventure game to do this, but I feel I should clarify this statement somewhat by calling it the first major graphic adventure game to have a female as the sole protagonist. After all, both Below the Root and Maniac Mansion gave the player the option to use female characters. Regardless, it was a brave step to once again change the protagonist in the series after game three saw Gwydion (aka Alexander) take centre stage from King Graham of the first two games. Another pioneering aspect of King’s Quest IV was in the sound department, with the game reported to be the first commercial release for PC compatibles that supported sound cards as opposed to only built in speakers. To make the most of this advancement, they hired well known Hollywood composer William Goldstein to write the 75 separate music pieces that can be heard throughout the game. 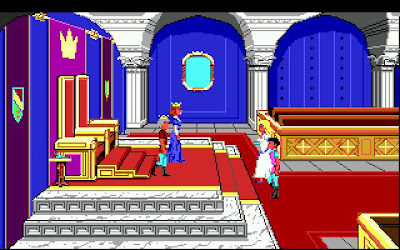 Continuing with the technical advancements, King’s Quest IV was the first game to take advantage of the SCI (Sierra’s Creative Interpreter) engine. All previous Sierra graphic adventure games had used the AGI (Adventure Game Interpreter) engine, which was a procedural language, whereas SCI was completely object-oriented. Apart from the soundcard compatibility mentioned above, SCI also allowed a higher resolution, being 320 x 200 rather than 160 x 200, had full mouse support, and a more sophisticated text parser than AGI. The SCI engine would eventually go through five major versions between 1988 and 1996, with the first one eventually taking the name SCI0. It was developed by Pablo Ghenis, Stuart Goldstein, Robert E. Heitman, Jeff Stephenson and Chris Iden, with the latter two having previously worked on the AGI engine. Interestingly, unlike other recent Sierra games of the time, the graphics, programming and animation were all handled by first time employees (apart from animator Gerald Moore), many of of whom would take part in numerous SCI developed games in the future. 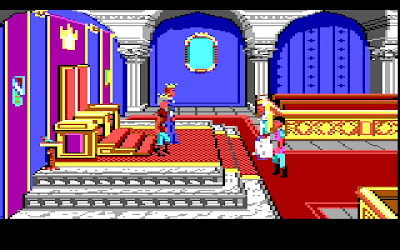 It’s worth noting though that King’s Quest IV was actually released in both AGI and SCI engines. Sierra was uncertain how many potential players would have systems capable of running the SCI version, so felt they should cater for all. The SCI version would outsell the AGI version by nine to one, resulting in no future games being developed using AGI. It makes sense for me to play the SCI version, particularly as that’s the version that came with the King’s Quest 4 + 5 + 6 collection I purchased from GOG. Obviously I have the manual too, which describes what occurred in the first three games for anyone new to the series, while giving nothing away for the adventure ahead. At the end of King’s Quest III, an old and tired King Graham decided it was time to pass on his adventurer’s cap to one of his two twin children, Alexander and Rosella. While the player was left in suspense as to who would catch the cap the King threw in their direction, one look at the title of game four left no doubt. It’s time to take control of Rosella and to face whatever grand adventure awaits... 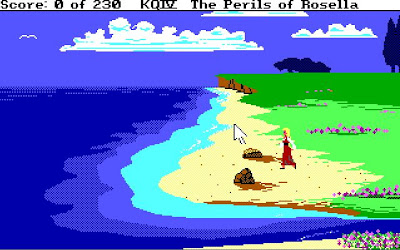 I really have absolutely no idea what's going to happen in this game...which is fantastic!
Posted by The Trickster at 21:50