Gold Rush is in the can so to speak and I'm quite curious to see where the PISSED rating system places it in the scheme of things. There are definitely some good things that I plan to take into account, so despite my disappointment with the second half, I don't think it will fare too badly.

Puzzles and Solvability
Gold Rush is a game of two halves really. After the first three hour session I would have given quite a good rating for this category. There was a really good balance between giving the player just enough information to find solutions while not blatantly holding their hand, there were negative consequences to non-ideal solutions, the timer based narrative rewards swift players while still leaving opportunities for slowcoaches (like me), and all the puzzles fit extremely well in the 1800’s setting. Unfortunately, as soon as you begin the long travel from Brooklyn to Sacramento, things take a turn for the worse (and now that I’ve witnessed the two paths I didn’t take, I can confirm this to be the case no matter which path you take). 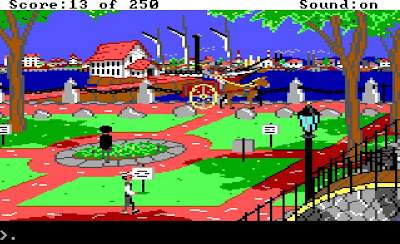 Looking back at these screenshots now, I can see the Sea Farer in the distance. It was gone by the time I went to the wharf.

There are literally huge sections of the game that feel like educational lectures, with no interaction whatsoever. What little tasks there are during this period are simplistic and feel tacked on and the player can randomly die with absolutely no way of avoiding it. While the puzzles do improve once you reach Sutter’s Fort, this last section of the game is very confusing, particularly if the player approaches it in an unexpected order like I did. You can easily dead end yourself by purchasing an incorrect (yet totally reasonable) item from the trader, the whole mule episode relies on chance rather than logic, and the last two maze puzzles of the game shamelessly take advantage of the AGI engine’s weaknesses. Looking at the ratings I’ve given past games, I probably should give it a 3, but that feels a bit too harsh for the enjoyment I did get out of it.
Rating: 4 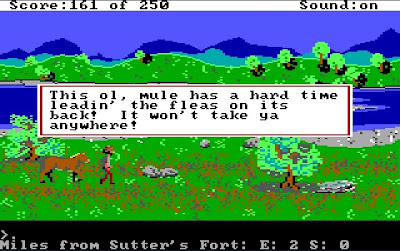 The mule puzzle relied on the player doing something that they actually had no logical reason to do.

Interface and Inventory
Inventory is exactly as you would expect for an early Sierra game, so no comments are required there. The interface is another matter, and once again, it’s a mixed bag. On the positive side, there are some slight improvements in general movement, with past issues with climbing stairs suitably fixed. On the negative side, the game often switches the perspective of the player, whether it’s through the use of a top-down view or simply by switching the direction of the camera. While this is used to try to give the player the best view of what is obviously fairly accurate architecture and landmarks, it caught me out a couple of times and caused me to miss screens that were important to the game’s completion. Trying to move the tiny blob on the screen into buildings and interact appropriately in the top-down or pulled back camera sections is also rather difficult. Probably my biggest complaint however is the parser, which is far too limited in understanding, particularly when compared to other recent Sierra games.
Rating: 4 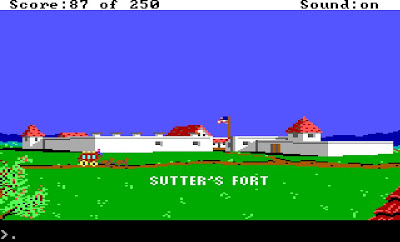 This is not a cut scene. The player controls a tiny little dot to move Jerrod around.

Story and Setting
Credit where credit is due! The MacNeill brothers created a unique setting for an adventure game and it’s one that lends itself well to the genre. They also deserve credit for taking the rather brave approach of giving the player three distinct pathways across America. While I have my issues with the way this was actually handled, the idea is not a bad one and gives the game a replayability the genre isn’t known for. The general plot to find your brother Jake is also quite compelling, despite him leaving stupidly cryptic notes in difficult to find places. Where the story falls down is in the way the creators felt the need to insert every single piece of knowledge they had about the era (which is not insubstantial I’ll add) into the game. Gold Rush is educational and historically accurate to the point of boredom, to the detriment of an otherwise enjoyable yarn.
Rating: 5 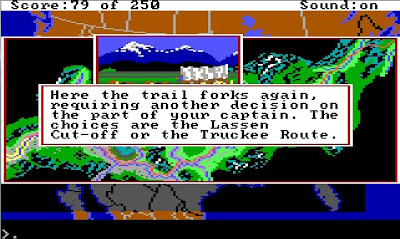 A decision that I had no part in making. It's hard to care about the outcome when you have no control over it.

Sound and Graphics
By now you should know what to expect when it comes to sound in the Sierra games of this time. Most of the game is met with silence, with only the most basic effects popping up in low quality. The music on the other hand can be enjoyable, but despite some suitably local tunes kicking in during the travel sections, for the most part it’s forgettable in Gold Rush. The graphics however are pretty impressive, and are probably the best example of visuals using the AGI engine. The MacNeill brothers pulled out all the stops, with larger characters indoors, large amounts of detail, and even some simplistic shadow and lighting effects. They nailed the era, including the architecture of the various buildings and the design of the numerous vehicles. The only downside is the lack of variety once you leave Brooklyn, but I have to admit that’s less of an issue if you take the jungle inclusive Panama path. Overall, I think if the music had been better, Gold Rush would have got the first 6.
Rating: 5 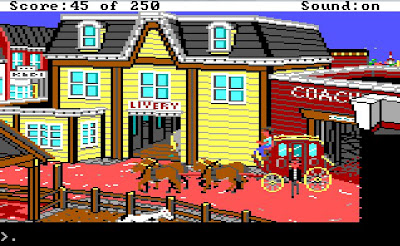 There was clearly a lot of love and effort put into Gold rush and it shows.

Environment and Atmosphere
As mentioned previously, I think the MacNeill brothers did a great job in realising 1848 America. There are probably heaps of inaccuracies, but given I know so little about this time in history, or the locations it took place in, I can only be convinced and impressed by the result. While it unfortunately didn’t entirely click with me until it was too late, the timer based occurrences (such as the ship leaving, the cost of items going up, and the house prices going down) all add to the sense that you’re taking part in something close to what someone of the time might have experienced. I’d like to say that the sudden unavoidable deaths add to the reality of proceedings, but it’s difficult for me to put a positive spin on what is a pretty frustrating facet of the game. That being said, even though I’ve heavily criticised the longwinded journeys by land and sea, they do the game no harm when it comes to making the player feel part of a thriving and refreshing gameworld.
Rating: 7 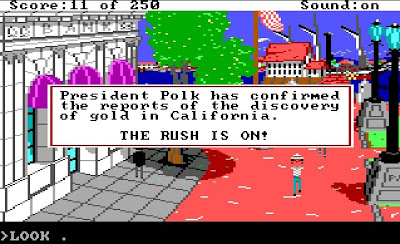 Previous games hadn't prepared me to take this notification literally

Dialogue and Acting
Gold Rush has a lot of dialogue! For the most part it does what is necessary without attempting any sort of literary embellishments. It’s low on humour when compared to games by Al Lowe and The Two Guys From Andromeda, but it occasionally raises a smile. Something that did catch my attention was the way it switches randomly into uneducated yankee mode, even in the descriptive narrative. I wonder whether they originally intended it all to be like that, but simply couldn’t keep it going. I’ve already criticised the over-educational approach of the game, so I won’t consider that to be a negative in this category. Not much else to say here, good or bad.
Rating: 5 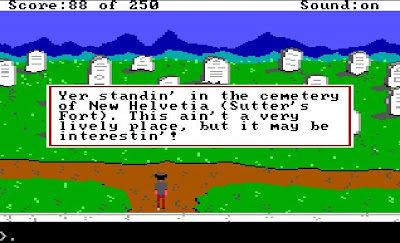 It's like a new commentator just stepped into the box for a session! 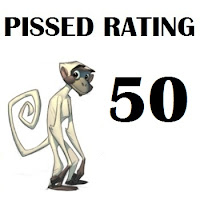 I'm pretty happy with a 50 for Gold Rush. It's not as good as Leisure Suit Larry, Space Quest or even Police Quest, but it's more enjoyable than games like Tass Times in Tonetown or The Black Cauldron. We're 17 games in now and I'm satisfied the PISSED rating system is working adequately. Now...time to check out the first King's Quest game I haven't played previously...King's Quest IV!
Posted by The Trickster at 22:15