Missed Classic 94: The Palace of Deceit: The Dragon’s Plight (1992) – Introduction 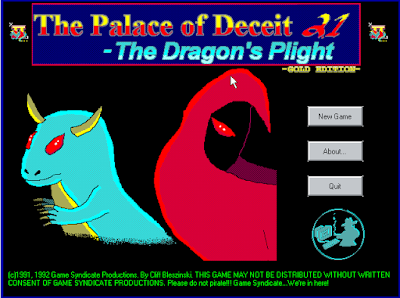 Here we go again! According to Wikipedia, The Palace of Deceit was “remade for Windows 3.x and subtitled The Dragon’s Plight as a graphical point-and-click adventure game with an entirely new plot and graphics”. Call me old-fashioned but how is this a remake and not a sequel? You actually play a dragon in this one, so it must at least be a spin-off. However, the designer was still Cliff Bleszinski and according to a portrait of the man written by a guy called Joe Funk (seriously!) in Hot Jobs in Video Games (2010) his inspirations were the ICOM games like Déjà Vu and Uninvited. I’ve already pointed out the similarities to Shadowgate when playing the first iteration of the game, so this doesn’t actually come as a shock.

The Dragon’s Plight was released on August 31, 1992, once again as shareware, but this time for Windows 3.1 which had come out in April of the same year. Cliff’s company Atomic Revolution Software had been renamed to Game Syndicate Productions in the meantime while InnerVision Software channeled their inner sense of Wonder as their publisher. There are no ASCII graphics this time and, in my humble opinion, at first glance the game looks worse for it. Behold the wonder of Microsoft Paint, we’re in self-made bitmap country now.

In lieu of the standard fantasy plot of the first game, we now have a more unusual setup: We are the dragon Nightshade who was imprisoned by our nemesis, the evil wizard Garth. For what it’s worth, this game may even be considered a prequel since we kicked Garth’s behind and destroyed his castle in the first game! Do you know any other adventure games with a dragon as the protagonist? It sounds quite unusual but due to the first person perspective it won’t make much of a difference, I guess. Anyway, Garth seems to really loathe dragons, leading a campaign to wipe them out altogether. Why he let us live, we do not know (the Royal we seems befitting for a dragon like us!) but we swear that it will haunt him beyond death when we get our claws on him.

The Dragon’s Plight is the game that first impressed Tim Sweeney of Epic Megagames and prompted him to contact Cliff Bleszinski, starting his career as a designer of games that impressed everybody, like Jazz Jackrabbit and Unreal. Let’s say hello to Beastie, shall we?

The game seems easy enough at first but will probably involve quite a bit of pixel hunting. Apparently, the mouse is “intelligent”, meaning that it changes its appearance when you move it over a hotspot. It can change to either an exit sign, an “action” arrow (replacing push, pull, use, and so on) or an “object” arrow (replacing take, give, use ... with, and so on). I must say that it works pretty well and turns out to be quite intuitive. It’s also very modern, resembling contemporary touchscreen interface solutions.

The first room is my cell. I can’t interact with either the door or the small rocks on the ground but I can exit to the eastern part of my cell containing my “food” (just bones at this point) and some straw that probably serves as my bed. There’s a loose brick I can interact with, and doing so opens a door in the wall, which is an old trope but together with the design of the prison, it’s slightly reminiscent of Maniac Mansion. Behind the secret door there is a corridor, and at the end of the corridor there is a skeleton. The dead adventurer who came before me is still holding what I assume to be a bit of chalk, and with that he scribbled a message on the wall in what looks like Greek letters from afar. In the status box – essentially the parser – I receive my feedback, and apparently I find that the ancient script is hard to decipher. To my surprise, the status box also contains a crystal-clear translation. Was it not so hard to decipher after all, you little spoilsport of a status box?

It does not make a whole lot of sense but the unfortunate adventurer tells me, i.e. the “next unfortunate one”, how to solve a button puzzle in the adjacent room. Why did he starve when he knew how to escape? Maybe what lies beyond is even more fearsome. The puzzle is very, very straightforward: “Red means death, Green does too, Yellow drains life, but leave one the Blue.” I think I’ll push the blue button. Correct? Correct. I try out the other buttons, too, just to check out the death screen. It’s not really worth it.

Beyond the gate I ascend into the mines. Yes, ascend. You got to keep the dragon way down in the hole, it seems. The exits in the game are labeled and while one click lets me examine them (as well as objects), a double-click makes me go there (or use the objects). Again, it’s a very intuitive interface and really astonishing for such an early Windows game. The west mines contain a lot of blue crystals and another exit, but their main purpose is as a north-south corridor. Beyond that, there’s a red room with a barely legible sign that says “ridg ut”. If I enter the adjacent door, it becomes clear what it means – “bridge out.” I remember this bridge from the previous game (and from Shadowgate) which reminds me: do I have an inventory this time around? The solution in Shadowgate is to empty your pockets before crossing the almost-broken bridge. This time, it doesn’t work: my pockets are already empty but at least there’s an inventory button. Another improvement over the previous game. I try to cross the bridge regardless as there’s an exit near the end – but I die. Back to the beginning it is. Time to check out the control room instead.

On the way to the control room, there’s a round room – a Zork reference, maybe? – that “seems almost out place” because it is kept clean and well lit. The game goes out of its way to mention the torch on the wall (unlike in other rooms) but my pixel-hunting does not reveal any hotspots. The control room has four levers and four buttons in four different colours. While the buttons are yellow, green, blue, and red (in that order), the levers are red, blue, green and yellow. I don’t know what that means and when I try to investigate the game tells me that it’s “not a good idea to push strange buttons”, so I can’t interact with them. So far, the game is quite linear. We’ll see if it stays that way.

The antechamber of the east mine is the opposite of the clean round room: it’s grungy and coal dust covers everything. The room beyond is even dirtier: “Absolutely everything is covered with grime and tar.” I arrive at yet another broken bridge and there are a lot of sparkling diamonds I can’t seem to pick up. The bridge is just as defunct as the other one, and when I try to cross it, it “proves unable to hold a 300+ pound reptile.” Fair enough. This seems like a good place to stop, and it feels as if there’s some serious pixel-hunting in my near future.

Now I’ll fire up my VirtualBox with Windows 3.1 installed but if you’re brave enough to play along, one possibility would be to peruse the dedicated archive.org site here. In any case, don’t forget to guess the score – the first game got a meager PISSED rating of only 20 points but remember that it was unwinnable. And don’t our dragon look fine when he’s comin’ after Garth?

Note Regarding Spoilers and Companion Assist Points: There's a set of rules regarding spoilers and companion assist points. Please read it here before making any comments that could be considered a spoiler in any way. The short of it is that no CAPs will be given for hints or spoilers given in advance of me requiring one. As this is an introduction post, it's an opportunity for readers to bet 10 CAPs (only if they already have them) that I won't be able to solve a puzzle without putting in an official Request for Assistance: remember to use ROT13 for betting. If you get it right, you will be rewarded with 20 CAPs in return. It's also your chance to predict what the final rating will be for the game. Voters can predict whatever score they want, regardless of whether someone else has already chosen it. All correct (or nearest) votes will go into a draw.

Posted by Ilmari Jauhiainen at 22:00

Email ThisBlogThis!Share to TwitterShare to FacebookShare to Pinterest
Labels: 1992, Introduction, Missed Classic, The Palace of Deceit: The Dragon’s Plight, Will Moczarski