What do you do when everyone is wrong about a game? I don't mean in a subjective sense, like you think Citizen Kane is worse than Plan 9 From Outer Space; I mean objectively, like Citizen Kane is a space opera/nunsploitation film starring Jackie Chan, Vincent Price, and Gloria Swanson. Today, that's what I bring you, the game the internet calls a RPG, The Nine Lives of Secret Agent Katt, hereafter referred to as Secret Agent Katt; Until I need to inflate my word count that is. If you submit to the collective wisdom of the internet, its a RPG. Even one Russian site, who are usually good about this, and shall remain nameless, mention RPG elements in the description. I know the CRPG Addict briefly played this game before rejecting it. Why wouldn't he? After all, everyone says it is a RPG, and everyone is wrong. But first, a little backstory...

Secret Agent Katt is the second or third game by American developer Softlab Laboratories, later WRF Studios, and consists of William R. Fisher III and whoever he works with at the time. He is known for two things, a series of horror adventure games known as The Last Half of Darkness, six sequels, three remakes, and a series of vampire RPG games called Bloodlust. The Last Half of Darkness was little Morpheus's first horror experience, something that haunted him for years. I guess they're second fiddle to the Hugo series, in the sense that anything is second fiddle to the Hugo series, shareware adventure games never hit it big like action games.

The story is...oh, I can't find the full story. None of the game versions I can find on the internet say anything about the plot, there's no readme, I could use my leet haxor skills to see that info...but then I'd know everything. Mobygames says the story is we're looking for secret documents in a lab, but the game says we're looking for a diamond in an Italian museum owned by some guy named Franco. I'm gonna call him Jesus Franco until the game tells me otherwise, feels appropriate. I guess we're CIA, or some acceptable substitute. I do know that this game was coded in Microsoft Basic and there's going to be a scuba section at some point...and that I don't know how to get there. There's some PC speaker music that sounds like a cross between a funeral march and some old-school crime theme. Also, Fisher has an artstyle that makes everyone look like they're Greek gods, even the ghost vampire children. Its distracting at times.

Katt, two people that look suspiciously like Katt's identical brothers, and Tia, have broken into the museum. They've got a lot of gadgets, none of which I can use right now. Oh, except the gun, I can shoot that wherever I want. I do enjoy having that ability when I have limited ammo. I have a wide bevy of actions, look, move, open, close, use, take, radio (which communicates with a different female agent), inventory, save, load and quit. These I can also use by function keys, which is useful since moving the mouse across the screen takes more time than you'd think. The mouse is optional, but I'm not sure yet how it would work without one. I'm ignoring the obvious bit, the rope back outside. What happens if I do that?

A helicopter, but not a friendly helicopter. One that's shooting at me. Several aspects of game logic kick in here. Firstly, I don't get ripped apart like tissue paper; Secondly, this is supposed to be a sneaky mission, I assume that, you don't go in the dead of night with one gun if you want to go all guns blazing. Pretty sure they don't have a silencer on that gatling gun. What's a guy gotta do to fail a stealth mission here? Walk through the building blaring some Death SS? Thirdly, I just came down, why is an enemy helicopter there already?

Okay, there's no escaping the real problem this game has...speed issues. When the helicopter was attacking me, it chewed through my health quickly, but death isn't much of a problem when you're a screen away from the start. I have two options, I can let that happen, yippee; I can slow things down, which induces loading. I mean its obvious what I'm going to do, I'm just whining. Probably mess with it a little later.

Grabbing the squad, because I have to select them, its time to look through the museum. I don't know why you'd want to not take them, but whatever. Cameras don't detect me, but trying to take the egg causes a game over. One of Tia's items, the shades, reveals infrared beams. Which are what caused an alarm to trip. Her other items are a glass cutter and a lockpick. These I imagine will be very useful at some point that I'm not staring at laser beams.

Katt's items, on the other hand, seem useless. The gun I'll get into in a bit, but the blueprints do nothing it seems and the flashlight is pointless considering the entire place is dark anyway. That's what the dark blue is supposed to represent. Mad Dog just has explosives and a knife, while Roco seems to have mechanic items, like pliers and a screwdriver. I sure do enjoy using explosives in stealth missions. I mean, my stealth missions usually end in explosions and fiery death.

Aha, the diamond is easy to find...only its not that simple. Lasers! How do I get past them? No idea. The light above the jewel seems to be of interest, but shooting it does nothing. Its worth pointing out that those exits you see don't correspond to where you enter, its some sort of semi-realistic location scheme. Or something, all I know is its annoying and making moving around troublesome.

An elevator, the game has three floors. I think sometimes a guard appears in the elevator, which is not fun, but I could be misremembering. The game starts on the second floor. I guess there are multiple roofs. The door opens and closes so slowly on the speed setting I have, like pixel by pixel. I take it to the 1st floor. There's also a set of stairs, which seems like the wiser choice next time. Come to think of it, doesn't Italy use the numbering system where the ground floor is...the ground floor, not the 1st? At least this game has an excuse for not knowing that.

The 1st floor has nothing going on so far, two locked doors and one guarded by infra-red beams. One of those doors is the stairway up...which seems strange to me, but whatever. That means the 3rd floor is where its all at. There's an employee area there, which I'm staying away from for now. Trust me, fighting against a human isn't any better than helicopter combat.

Cool, powerboxes. Just going to turn off the power. Which I accomplish by turning off the power, no wire cutting for me. There was a door with infra-red beams a little while back. The glasses say there's no beams and...

So I reload. While messing around, I notice a book, it was up above two junction boxes, so it just looked like another one. I take it, so I can read it. It just says to not connect the fuses with a jumper wire. Although in fairness, it does say that's what I notice. I wonder if that's just a jumper wire thing or any crossing of the streams is a bad thing. I think that'd be the case, but I'm not an electrician. 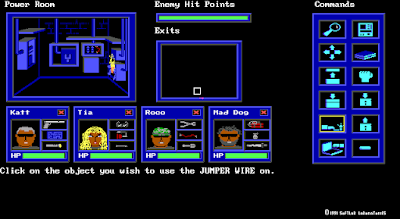 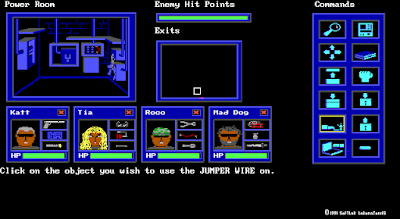 Ah, nothing like five frames of animation for half a minute. Does that solve the problem with the nearby laser door? No. So...uh...I guess I'm going to have to find out what that changed...cool...cool...I mean, what an amazing RPG experience! I wonder how many experience points I got? But before I go, I should talk about fighting a human.

Katt's gun has 15 bullets, and he fires at a pretty good pace, must be automatic. Takes like 5 bullets to take out a guard, I've seen at least two guards so far, but I'm willing to bet there are many more. That means the ideal gameplay style is to avoid coming into conflict, firstly, because none of them are guarding anything, secondly because...you already know how speed is working in this game. That's a distinct problem with Softlab Laboratories games, I remember a pair of children playing pattycake back in Last Half of Darkness who's hands were a blur...although that could be what actually happened. You never know, you never know.

Note Regarding Spoilers and Companion Assist Points: There's a set of rules regarding spoilers and companion assist points. Please read it here before making any comments that could be considered a spoiler in any way. The short of it is that no CAPs will be given for hints or spoilers given in advance of me requiring one. As this is an introductory post, it's an opportunity for readers to bet 10 CAPs (only if they already have them) that I won't be able to solve a puzzle without putting in an official Request for Assistance: remember to use ROT13 for betting. If you get it right, you will be rewarded with 50 CAPs in return. It's also your chance to predict what the final rating will be for the game. Voters can predict whatever score they want, regardless of whether someone else has already chosen it. All correct (or nearest) votes will go into a draw.

Posted by Ilmari Jauhiainen at 22:00