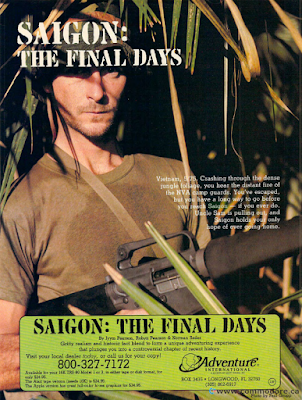 The fourth and final game by Jyym and Robyn Pearson that was – albeit only sometimes – marketed as an “OtherVenture” by Adventure International, is Saigon: The Final Days. It was first released for the TRS-80 in 1981 and ported to the TRS-80 CoCo as well as the Atari 400 one year later. As usual, there are some problems to come up with precise dates: while the CoCo version was programmed in 1982, it was apparently released in 1983. Also, somewhat authoritative sources like MobyGames don’t list an Apple ][ release but clearly there existed a version for Jobs & Wozniak’s miracle machine as well. As usual, we’ll get to that later in my WON post.

Like its predecessor Earthquake – San Francisco 1906, the fourth Pearson game employs a historical backdrop. Saigon: The Final Days is, as you might already guess, set in Vietnam during the final days of the US-American military involvement there. According to a November 1983 ad in Antic, “[g]ritty realism and historic fact blend to form a unique adventuring experience that plunges you into a controversial chapter of recent history.”

Saigon apparently ends Pearson’s realistic phase, as his four remaining games we will play for this blog are all made of a substantially more fantastic cloth. I haven’t got much more information about the game, to be honest, but I’ve got lots of nice pictures, so I’ll just make this post more colourful than usual:

And, to finally and once and for all answer a question that was asked on The Adventure Gamer quite a lot of times, here’s the definition of an adventure game straight from the Jyym Pearson Four-Pack manual:

My first four hours of gameplay 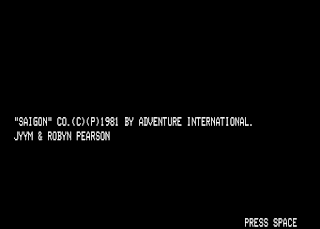 You start out as a prisoner of war in a small grass hut, so I assume right away that this is another escape plot. It is, but not the way I think it is. After one round of doing anything at all, the hut is blown to pieces by a rocket and I am the only one left alive. There is a dead Viet Cong soldier lying on the floor, and he’s the only ‘object’ I can interact with. Doing so reveals that he wears a jacket and that the jacket has a snap pocket. Whatever I try next, however, fails.

I move on to the next screen where there’s a stream I cannot cross. If I try to swim, I get shot at and die. This is actually the most famous scene from the game, as I’ve found out during my research. If you “confess to war crimes” instead of typing “swim” here, the parser recognizes the letters s, w, i and m regardless and you die at the hands of the enemy. Having some experience with prior Pearson games is almost a must to solve this one. Looking and listening reveals nothing new but smelling tells me that there’s a log that really smells bad. Could it be rotten? It doesn’t take me long to find out that “roll log” provides me with an opportunity to cross the river with my pants dry. On the other side, there’s an empty screen next to a jungle clearing. When I listen, I can hear gunfire but apart from that there’s nothing to discover. Moving east I get to the jungle clearing. I can see pliers lying on the ground, so I pick them up. Doing anything else here results in me getting shot to death. Like in the other Pearson games, there’s no save function but I can start over with my inventory intact. The pliers could be the key to opening that snap pocket, couldn’t they?

I try (almost) everything. There are no other exits to be found and I am simply unable to proceed here. The jungle clearing spells sudden death and the snap pocket just won’t open, no matter which verb I use. It takes me almost four hours to come up with the solution, and as the other ninety percent of the game take me about two more hours, I’ve decided to let this introductory post end here. Why? I’d like to recreate my experience and give you the opportunity to venture a guess what I should (and eventually would) have done. To make things “easier”, here’s a series of screenshots to accompany the puzzle. 20 CAPs for the first fellow adventurer who can solve this! And don’t forget to make a bet! 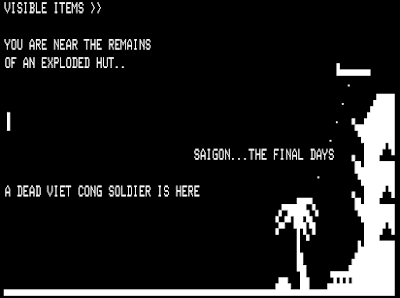 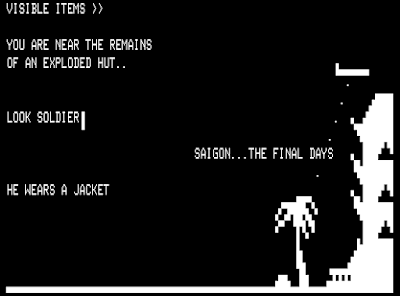 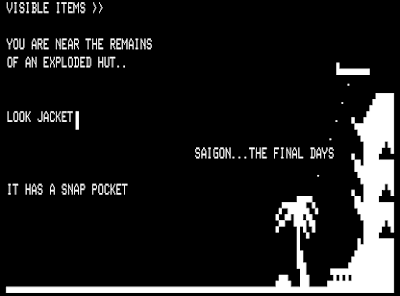 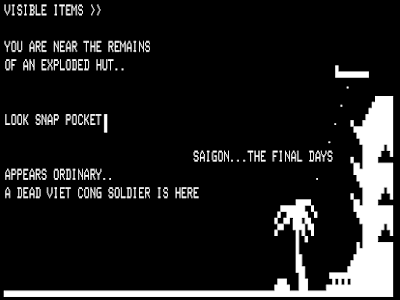 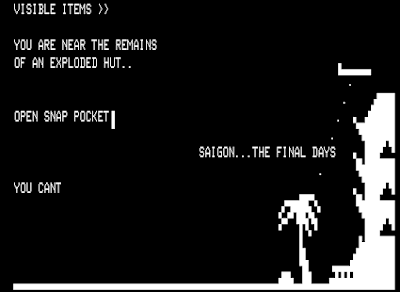 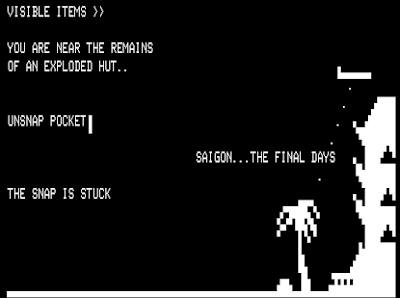 Note Regarding Spoilers and Companion Assist Points: There's a set of rules regarding spoilers and companion assist points. Please read it here before making any comments that could be considered a spoiler in any way. The short of it is that no CAPs will be given for hints or spoilers given in advance of me requiring one. As this is an introduction post, it's an opportunity for readers to bet 10 CAPs (only if they already have them) that I won't be able to solve a puzzle without putting in an official Request for Assistance: remember to use ROT13 for betting. If you get it right, you will be rewarded with 20 CAPs in return. It's also your chance to predict what the final rating will be for the game. Voters can predict whatever score they want, regardless of whether someone else has already chosen it. All correct (or nearest) votes will go into a draw.