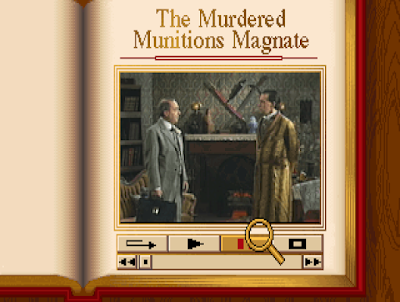 Two cases down and one to go! Thus far in Consulting Detective Vol. II, we’ve solved a pair of murders and it appears that we are going three-for-three. Admittedly, the first case was murder-with-theft and the second was murder-as-a-cover-up, but both involved murder. Some commenters have suggested that this is the best case of the bunch and so I am looking forward to it. The last case wasn’t the best, but this one could easily sweep me off my feet and we’ll enter the PISSED rating with the wind at our backs. I can dream, right?

This case starts with a nice video introduction. Richard Allen arrives at Baker St. having been let in by the housekeeper. He apologizes for the intrusion but wants to discuss the murder of his brother, Courtney Allen. Holmes read about the case a few weeks prior in the Times and knows all about it. Courtney was the President of the Grant Arms Company and was shot to death on March 9 (almost two weeks ago) outside his office. Scotland Yard believes that he was just robbed, but Richard believes otherwise and needs Holmes’s help. This sounds like a good start!


We continue our interview. Richard tells us of his brother’s ways as a “ladies man”, much to his wife’s displeasure, as well as about some questionable business decisions that could have upset his partners. He is focused on two people that may have a motive, but I doubt things will be quite that easy. His suspects are:

Richard brought Courtney’s briefcase from the night of the murder; exactly how he managed to get the evidence off of Scotland Yard will have to be an exercise for the reader. He tells us that Courtney’s pocket watch was taken, but not his folders, keychain, gold wedding band, or notebook. Holmes digs through the case and announces that the folders are of a “personal nature”, but one labeled “SP10” is empty. Holmes also finds his dayplanner which reveals an 8:00 AM “surprise” appointment at the plant, an 8:30 PM meeting with Captain Egan, and a note to “meet at Spaniard’s” at 10:00 PM. That note is very strange because Holmes says that it is written in Courtney’s handwriting but signed “A.M.”.

With the video over, I turn to the newspapers but there are none! The case is dated March 20, 1888 but the very first newspaper issue is from July 1888. Not having to search the newspapers for this case will be a nice change, although I cannot help but fear that it is a bug and the case’s date is incorrect or something.

Let’s start with completely unfounded speculation and we’ll see if I am correct:

Where should we start?


I need a game plan. Rather than attack the people with the obvious motives, I’m will trace the events that led up to Courtney’s death and who he saw that night. If that doesn’t reward us with leads, we can go elsewhere. I’m doubly curious about the note with the strange signature, so let’s start with Spainiard’s Inn. I’m fairly certain that he was killed before he made his dinner date, but we may learn something anyway.

Watson slips the waiter some cash to loosen the waiter’s lips (a fantastic detail!), but he does recall private room reservations with the initials “A.M.” on March 9:

Was one of these men Courtney in disguise? Or was he already dead at this point? We do not know yet when he was killed, only that it was when he was leaving work. If his schedule is anything like mine, that could mean any time between 5:00 PM and 11:00. Let’s investigate his 8:30 PM appointment with Captain Egan next.


Captain Egan is happy to talk with Holmes, but Courtney never made it to his appointment on the 9th. Egan informs us that Courtney first approached him last summer with designs for a revolutionary naval gun. The project was approved by the British Navy and is quite secret. As for the night of his death, Egan does not know what the appointment would have been about, only that he received a cryptic wire:


Neither Egan nor I have any idea what that means, but he believes that “pounce at 10” may have referred to Project #10, something secret being developed for the Navy. Courtney had worried about security and Egan had placed his best men on it. They discovered that Richard Camp, an engineer on the project, smuggled out bundles and boxes to the French embassy. Egan believes that Camp was passing details of the project to Emil Zobar, a French military attaché. Lord Ragland investigated but ultimately found no wrongdoing. Even so, and in the interests of security, Ragland had Camp removed from the project on March 11, two days after Courtney’s murder. Egan is convinced that foreign governments are trying to spy on the project with his four biggest suspects being Zobar, Van Suklenberg, Delgatta, and Metkof, but Egan has no proof about any of them.

Taking stock, this means that the SP10 folder has to be “Special Project #10” and that Courtney was killed to get whatever had been in there. Whomever did it tried to make it look like a robbery, but what we have is a bit of old-fashioned military espionage. Since the French already seem to have information on the project (through Camp), I’d wager that a different country is at fault here.


With no more evening appointments, where should I go next? I try our “A.M.” leads, but learn nothing of importance. Holmes’s files say that Mariano was once a suspect in the “Spaghetti Murders” but charges were never filed. A visit tells us that he knows nothing about the case so that is a dead end. Mishkin is not listed in the directory and likely works at one of the embassies. Maybe the Russian one? (Mitkof is also a Russian surname; am I screwing up and they are both the same name? They don’t sound alike.)

I still do not have enough information about the murder itself. I hit Lestrade next for some basic info and he’s shocked that Holmes is interested in this “simple robbery”. Scotland Yard found Courtney dead in the alley behind Grant Arms with his wallet and gold watch missing, his briefcase open and askew but nothing obvious stolen. The only other evidence found at the scene were a bunch of tin cans and a cigarette butt. Holmes immediately leaps on the butt as a critical bit of information so naturally Lestrade happens to have it with him. It has the letters “B&H” on the side which must be important later! Holmes lectures Lestrade on the importance of studying cigarette butts, but we’re done here. He didn’t tell us how Courtney died so we’re off to talk to Jasper Meek, the coroner, next.

Sir Jasper gives us exactly the details I was hoping for: Courtney was shot in the chest at close range. Judging by the powder burns, the assailant fired from no more than two feet. The bullet left a “massive” exit wound and the slug was never recovered. Jasper believes that it is a large caliber, but he doesn’t know for sure. I try H. R. Murray, the Scotland Yard chemist, to see if they analyzed the power burns, but he’s on vacation with his brother.

New theory: Courtney Allen was killed at close range by someone he knew using a prototype or military gun. The person smoked while waiting for him in the alley, so if we find who smokes that brand we may have a great lead. The destructive power of the gun, plus that Jasper was unfamiliar with it, makes it seem like an uncommon weapon.


I followed Courtney through his evening appointments and learned about the crime scene. My next stop will be to backtrack and check out his office. Looking up the company in the directory, we have two options: corporate offices or the “Deverall Street Plant”. I assume he was working at corporate so let’s start there first.

Holmes meets a “Mr. Linhad” (or Linwad? I cannot make out the name). He’s the new secretary to President Marlow, the formerly-third-in-line that took over the company when Courtney was murdered. He tells me a bit that we already knew, that Allen was scheduled to meet with Egan at 8:30, but adds that he left through the back door to catch a cab at 8:00 PM. Linhad tells us that this specific meeting was unusual because all of his other meetings with Egan were during the day. He repeats what Egan said about Courtney being concerned for project security and about raising the issues to Lord Ragland. None of this is new, but we learn that all of the blueprints and such for the special project are stored at the Deverall Plant, plus that Courtney and Marlow hated each other. Why would he appoint him as the President if he hated him? I contact Central Carriage Stables to see if there is anything to say about his cab pickup, but that is a dead end.


Where to next? Since Ragland was responsible for plant security, he seems like a good person to talk to. I try him next. Ragland starts by repeating much of what we already knew about Courtney’s suspicions as well as his appointment with Egan. He says that he investigated Richard Camp, but did not find him to be a security risk. And all of that is great except I cannot help but notice: Ragland is smoking throughout the entire interview! Holmes eventually asks him and he reveals that he smokes Burns & Hills cigarettes. Eureka!

I’m not so distracted by the cigarettes to catch that Ragland claims to not be miffed that he was passed over for promotion given that he is a technical guy and doesn’t like to do administrative work. He also tells us that Marlow had to be appointed President by contract; Courtney had negotiated that with him back when he was hired. That gives Marlow a motive, too.

But none of that matters: Ragland did it. I don’t know why yet, but he was the one waiting in the alley that night. He shot Courtney with a military-grade weapon that he was able to get his hands on and made it look like a robbery. But why? He already knows about Project #10. He’s responsible for security! He must be working for someone else. But who? We’ll have to wait for that next week.

Thus far, this case seems more fun than the previous one. There is a lot to dig into and I hope that I just don’t get stuck on a spelling mistake like last time.