Ween : The Prophecy - Dragons and Cherries

Once again, I apologize to our fellow readers for the very (very) long time between my posts and the short lengths of my gaming sessions but I was drowning in a huge quantity of work these last months. Hopefully, it should get better soon and I should be able to play and write more about adventure games… fingers crossed and thank you for your patience.

Last post I was saying that if this game managed to keep its momentum, it could be a very good one. Unfortunately, the next portion of the game was not as good as its introduction. The second grain of sand was quite easy to obtain, but confronted me to a tedious boss battle that took me way too much time to beat.

But first things first. Last time I managed to put my greedy hands on the first grain of sand (out of three) needed to complete my quest. Now it was time to confront the dragon in order to obtain the second one. Right after receiving OHKRAM’s congratulations on the first part of my quest, I find myself in front of a subterranean lake.


When I try to cross the bridge, a big and ugly disembodied head blocks my path. It identifies itself as KRAAL’s messenger and drops a feather while appearing. I pick up the feather and look around the room. Three quartz crystals are shining on the floor near a seemingly-empty treasure chest. 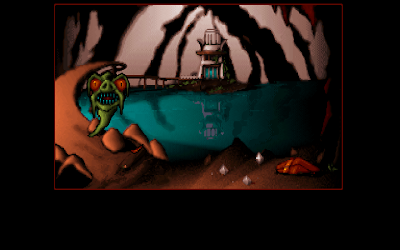 Using the feather on PETROY tells me that it’s a magical feather, used to make invisible things appear. The empty chest! Waving the feather at the chest reveals three items in it : a vial of venom, a vial of pollen, and a parchment telling me the instructions regarding the vials. 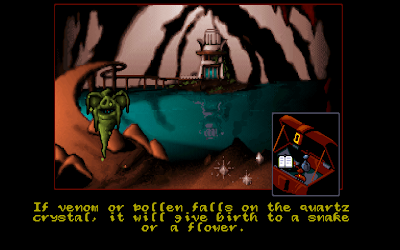 The parchment also tells me that, when mixed, the potions could make other lifeforms appear. Unfortunately, when I mix the two ingredients in the cauldron and try to drop it onto a quartz, it doesn’t work. Using once again PETROY as a guide to everything magical in this game, I learn that the elixir I found into the room last time could be used to reverse the effects of other potions. I mix the elixir, the venom and the pollen into my cauldron and drop it on the monster… and it disappears. Yay!


Let’s rewind a bit. The venom makes a snake appear and the pollen makes a flower appear. So I guess it means the monster was part snake/part flower? Even if it made any sense, dropping a mixture of pollen and venom on a quartz should make a monster appear, no? I mean, it would have been a nice clue. But no, you have absolutely no means of solving this puzzle except by sheer luck. If I missed a clue somehow, feel free to correct me for CAPs.

Right after destroying the famous flowersnake monster, URM appears out of nowhere and tells me I don’t need my half-fish-amulet. I know it was supposed to help me breathe underwater if I was able to complete it, but I never found the other part. This tells me there is more than one way to solve puzzles in this game! I’m guessing that I missed the other part somewhere in the rooms I’ve already visited and that it would allow me to go underwater, hence bypassing the flowersnake puzzle entirely. I’ll continue for now but I’ll make sure to look into this alternative path once the game completed! (Please, fellow readers, if you want to give me clues about this, use ROT13 so I can look into that myself)


Going onto the bridge, I find myself in front of what can only be described as a sword-wielding imp guarding a patch of giant strawberries. This game keeps getting weirder every time.


Looking around, I find a rock with characters etched in it. I can’t understand it but PETROY can. This is seemingly another riddle. “Beneath the dagger, the cauldron, the bow, the roast and then the game.” I think it will help in yet another game of pressing buttons in the correct order. I can pick up the sword from the hands of the imp (which, by its lack of reaction, seems to be only a statue) and use it to move the big rock into the hole next to it. I realize that this is the second time I do that in the first two hours of the game and ask myself if : A-the developers are already running out of ideas, and B-if the swords in this universe are only used as leverage to move things around.


The two giant strawberries behind the imp statue were obviously going to turn URM’s head around and as soon as I clicked on them, our fruit-eating friend just appeared out of the blue and eat them. And then it… errr… vomited a pile of gold coins. 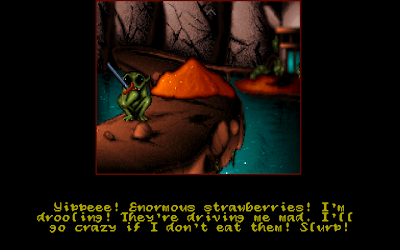 Clicking on the other holes make some kind of insect appear and disappear. URM tells me this is an Orivor, a short-sighted gold-eating insect. I plug the other hole with my cauldron and click on the last remaining hole. The orivor exits and ask for something to eat.


Helping the little buddy to the huge pile of gold URM… errr… dropped on the bridge, the Orivor devours it and let me access to the rest of the area. I get back my cauldron (after a warning from the game that I shouldn’t leave my cauldron there, once again confirming the reassuring fact that this game seems to be devoid of dead-end scenarios) and proceed. OPALE appears to me once again and tell me to hurry because KRAAL wants to force her to marry him.


After this intervention, I arrive in front of a gate guarded by a snake, which I had seen earlier into a vision. URM arrives once again to insist on the fact that I missed an alternative path into the game.


Using the torch on the snake doesn’t seem to scare it, but using the venom potion on it changes it into a quartz! The dangerous snake gone, I’m given free access over the rest of the screen. I pick up the torch and burn the thorns with it, opening the gate. However, a swarm of wasps immediately invade the place where the thorns were. I pick up a tiara on the ground and am told this is “one of the sacred jewels”. From what PETROY explained to me earlier, the sacred jewels can change the shape of my copper ball. I use the ring on my cauldron to turn it back into a copper ball and using the tiara on it changes it into a… copper pipe. Yay! You have a magic artefact that can change into different shapes and use it to make different kitchen appliances. Neat work OHKRAM. What’s next? A copper spoon?


The donut-shaped white thingy in the upper left corner of the screen appears to be a (timely) wasp-trap and I can reach it using my newly-shaped copper pipe. Using the wasp trap on the wasps trap them (you didn’t see that one coming, did you?).


I can now go through the gate in order to meet the famous dragon! OHKRAM appears to me to explain that the dragon is a shapeshifting one that can assume a hundred different appearances (including the ultimate weapon which is the shape of a dragon, which gets me asking why it bothers changing shapes at all in the first place). I have at my disposal three magic parchments in order to change shape myself, and the dragon only needs to be slightly stronger than his adversary to stop him from getting past. I sense a boss battle/puzzle coming up!


So. What do we have here. You can choose one of the three scrolls on the left of the screen to change your shape into something else. You name it : lions, bears, elephants, wolves. The whole circus is in town. Despite the fact that the dragon never, ever attacks, it always choose a more powerful form than you (debatable in some cases. For example : if you turn into a lion, it turns into an elephant, and if you turn into a wolf, it turns into a buffalo, I’m pretty sure these two battles could hold some kind of suspense).


Despite the fact that I spent way too much time on this screen, I’m still unsure of what each scroll does. I think there are classed by size because the first scroll only turn you into a lion or a buffalo, while the last one only turn you into smaller and smaller animals, but there is no real order here and a lot of it seems random. I tried many combinations. My first guess was that I had to turn the dragon into an elephant then turn myself into a mouse or an ant by selecting the smaller scroll but it doesn’t work. It also doesn’t help that the music is atrocious and repetitive during this segment.


After quite some time, I realise that I can turn the dragon into a wasp! And what do I have on me? A wasp trap! I don’t know why it took me so long to understand that I could use my regular inventory items in order to solve this battle. Maybe the alternative interface with the scrolls made me think that it was some kind of mini game only? Whatever it was, I now had a trapped wasp in front of me.


Once the wasp is trapped, though, nothing much happens except I can’t change shape anymore. I search the screen and find some cherries on the ground next to the tree! URM! I call URM using the flute (as a worm. I’d love to see an animation of the worm playing the flute), give him the cherries and order him to carry the wasp trap far from here. And the dragon is vanquished! The twins make another of their silly victory dance.


OHKRAM appears once again and tells me I won my second grain of sand. Score! I’m then teleported to another part of the labyrinth in front of three doors. The Borgol is also back and tells me that KRAAL has casted a spell on the guardian of the REVUSS and that I need the fragrance of some flowers to give her her real shape back.


And there we stop for today. The third grain of sand awaits behind what appears to be a maze. Join us next week to help the Guardian of the REVUSS and look into the real size of UKI and ORBI!