Written by TBD with Reiko

In a rare case for The Adventure Gamer, this game was actually played by two of us. Reiko introduced us to the game and started it, making the first gameplay post, and then I took over when Reiko was unable to complete it. As Reiko was fairly early in the game, I started it anew, quickly playing through the first chapter in order to catch up.

And as I played the game, it grew on me… grew on me like a malignant tumour. I started off finding it acceptably average, but it quickly became tedious as each chapter devolved into a game of trial-and-error, and sometimes the worst form of trial-and-error, where the randomisation had me continually try the same thing over and over until luck fell my way.

But you could say each level is a puzzle of sorts. Each level has a goal, which can be considered the puzzle, and how we go about achieving that goal constitutes the solution. Let’s examine chapter 2…


Goal: Stop myself being made a scapegoat of the Emperor’s murder.
Solution: Make enough money to bribe my way into the palace in order to warn the Emperor.

Interestingly, the solution to every Chapter apart from the two RTS Chapters starts with, “Make enough money to…” apart from Chapter 6 where the solution is “Have bought the dagger in Chapter 1”

Now, if I get technical, another potential solution to Chapter 6 would be, “Have ended Chapter 4 with at least 100 sesterces to spare” but seeing as it’s so hard to make money due to the strict time limit and the best way to make money involves having bought the dagger in Chapter 1 anyway, I’m sticking to first-chapter- dagger-purchase as the only realistic solution.

There are two ways to survive Chapter 1. After delivering the message you’re given in the opening cutscene, taking your reward of 3 sesterces and seeing Vesuvius erupt, you can use your 3 sesterces to...
Now, this wasn’t given as a choice in the game. It was obvious to both me and Reiko that option 1 is the ‘correct’ option. But the only walkthrough I found online gives option 2 as the only option, not even entertaining option 1 as a viable strategy.

How does option 2 work out? Simple, after buying the dagger, threaten citizens until you have enough money for a boat ticket, then continue committing extortion so you also have enough extra cash to buy some loaded dice to cheat at gambling later, and if you have time and money also pay a priest to make a sacrifice in order to give you better luck later in the game.

So barely any puzzles to start with and topping it off with a crippling dead-end..

Now, the interface in Rome is mostly functional. It’s not exactly intuitive at first but once you get used to it it’s okay.

The map was actually quite good. It gave a whole map of the city and shows all the people as brown dots, that move, allowing you to see where people are going.


The inventory is close to useless. It’s where I keep my slaves, but they could easily have worked with the DO command instead. Other than slaves, the inventory contains a toga and a message for a few seconds each, an assassin if I’ve hired one and possibly a dagger if you happened to buy it in Herculaneum (grrrr!)

Items pillaged from the British villages are immediately turned into cash, and money is used with the DO - PAY command. So there’s nothing to be done with inventory management in this game.

Something else worth mentioning in this section is the horrific pathfinding. It’s only an occasional inconvenience in the city sections but in the Real Time Strategy chapters it really makes the army hard to manage. It’s probably the main reason I didn’t restart the game from the beginning in order to get the dagger and more cash early - I just couldn’t bear the thought of quelling the British rebellion again.

So, a nice map; functional menu on the left but everything else below par…

The story started off fine - I was a slave trusted to deliver a message who then managed to escape the eruption of a volcano and start a new life in Rome, ingratiating myself with the Emperor due to an act of patriotic heroism.

By the time it became obvious that Hector would accept nothing less than being the Emperor of Rome, the story became a bit unbelievable and Hector a much less sympathetic protagonist.

To top it all off is the timing. This didn’t become obvious to me until the final cutscene, as I thought the game must have taken place over a number of years and just skipped over the time Hector did a job he was assigned to. As it was, apart from being an unqualified General, Hector never got to do any of the jobs he was assigned to. He was a Senator for a day before becoming Consul, and he spent that day campaigning for office. He was Consul for a day before becoming Emperor and he spent that day plotting and organising the deaths of the two people who ranked above him. To make it somewhat realistic the game just needed to have some text each chapter saying something about the years in the job becoming mundane. Even the crew of Darth Vader’s Star Destroyer get more time on the job before being promoted over their incompetent superiors.


As I will mention in the Environment and Atmosphere section, the city of Rome worked well as a setting, but the rest of the locations were weak.

So, a solid Rome setting, less solid other locations and somewhat silly story...

There wasn’t much sound - the game was mostly silent. There are a few sounds - sword clanks during the games or strategy chapters, a bit of music during the start of chapter cutscenes, the herald’s trumpet, but mostly there was no sound at all. The Amiga version has a few more environmental sounds based on the longplay I used to watch the ending.

Though the graphics weren’t great it’s hard to judge them too harshly as there are a lot more moving people in this game than most others. The graphics were serviceable - trees looked like trees, aqueducts looked like aqueducts, etc. The mostly still scenes between chapters looked a lot better but were just stills with perhaps a few moving parts with text.


So, minimal unexceptional sound and average to disappointing graphics…

Rating - 4 (I was very close to a 3 here due partly to the lack of graphical variety, but ended up leaving it at 4 - the game is okay at drawing grey stone, at least)

Now it’s time for me to say my second nice thing about the game. It did an excellent job of making Rome seem like a real bustling city where the people went about their daily business and I was merely another citizen.

On reflection, there’s probably less than 30 people in the city but it feels like a lot more. Making a city feel realistic in a game without being ridiculously overwhelming with realism is very hard, and this game made Rome feel real despite being much smaller than any real city would ever be. Round of applause, Rome AD92. Round of applause!

But because I can’t say too much nice about this game without tensing up, I’ll say something bad about it too. The strategy sections and cartoonishness detracts from the atmosphere. The strategy maps are too… ah… gamey, for want of a better word. They don’t have the scaled down realistic design of the city of Rome and just seem like randomised standard strategy maps.

And as for cartoonishness, the final chapter in particular is the opposite of atmospheric. The Emperor, who was perhaps not portrayed as a genius earlier, became batshit insane in the final chapter (which is only days after the previous chapter, remember.) In all of fiction there has never been and never will be a change from competent leader to murderous insanity as abrupt and unbelievable as this one. 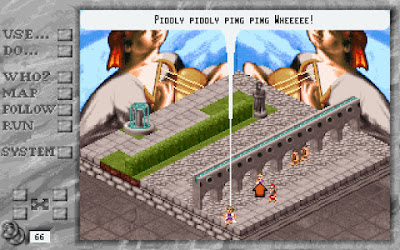 There were no dialogue options - when Hector clicked ENQUIRE on people he’d ask them a chapter specific question, such as “What is this I hear about the Emperor going mad?” or “I am standing for election to Consul. Can I rely on your vote?” Other characters' responses are largely hints for achieving the current chapter’s objective.


There is no voice acting at all in this game.

I want to take a point off because I feel the whole is truly less than the sum of its parts in this case when viewed as an adventure game. Though I don’t think the RTS sections would fare any better in a strategy gaming blog either. So I’ll end up with a 31. 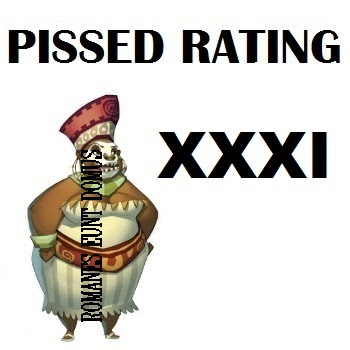 Charles' guess of XXXII was the closest, so he gets the prize of X CAPs.

TBD has done a great job slogging through this game and examining exactly what makes it so poor. I can’t thank him enough for taking over for me, and I fully agree with his assessment. I want to comment a bit about the content before we leave you all with CAPs.

I gave up on the game partly because I was having a lot of trouble with making progress in chapter 2, and I didn't have time at that point in the year to keep poking at it. But another reason was because of how despicable the main character is. It starts with petty theft (and extortion, if you take that route) in chapter one, but by chapter two you're already up to buying and using slaves. By the end, you claw your way to the top using murder and assassins.

I simply don't have any desire to play a game that forces you to do things like that. Given the title (and not too much else, as I didn't want to be too spoiled before playing it), I thought it would be more of a historical scenario, but, as we've both discussed in various posts, it's not realistic in the least. And it doesn't give you any choices for how to accomplish what you need to do. Well, no palatable choices, anyway.

So now we can all be glad this one's done and we can move on to something else.