That’s it! I conquered Curse of Enchantia! I slayed the beast! Victory! Free at last!

I have mixed feelings about it. One part of me is very proud to have done this without a walkthrough (even if the temptation was very strong a few times) and the other part is astonished by the vacuity of the whole thing. I think my soul has died a little by playing this game to completion. Good thing it was for the blog, if it helps at least one person to stay away from this game in the future, maybe my sacrifice wasn’t for nothing.

But for now, let’s all go back in the enchanted land of Enchantia one last time in order to help Brad get rid of the evil sorceress once and for all! Yay!


After my trip to the planes of madness, I find myself back in town once more. As I now have in my possession the precious fire extinguisher and electric fan, I pay another visit to the wizard. I expect him to send me back to the cliff so I can give these items to the giant parrot but then again, the wizard has proven in the past he can be a little erratic about what his magic exactly does. What’s the worse than could happen? It’s not like he’s going to kill me right? 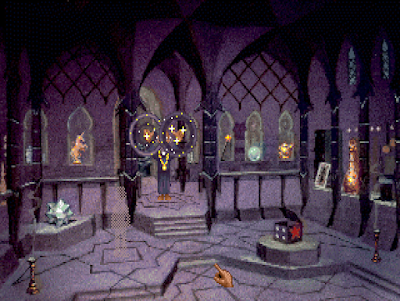 So I wake up into some sort of grave, proving the wizard has a sick sense of humour (or is totally incompetent). Looking around me, I grab a bone and ATTACK the wall with it so Brad can carve his way out of here.


Exiting the grave, I find myself in a nice looking graveyard, complete with a tombstone to my name, bats, full moon and zombie hands trying to grab innocent feet. Nice place you got there! I guess I’m getting close to the evil enchantress. If only the music would change somewhat to reflect the atmosphere of the whole thing, but then again we are stuck with the same tune.


Immediately after, a vampire appears and rushes towards me. When he touches me I disappear and the whole scene starts again. This puzzle is actually the one that took me the most time during this session. I grabbed the cymbals and the shovel next to me and tried everything on the vampire but nothing worked.


The fact that the vampire is running towards me is a bit of a clue though. I try to go down on the screen for him to get grabbed by the zombie hands but I get grabbed instead. I spend a long time trying a lot of things but the solution is simple enough. You have to get behind your grave as soon as you exit it so the vampire falls into it. The difficulty is actually managing that because the pathfinding is quite finicky and the time window very short. After the bandit and the yeti, this is the third time in this game someone falls down while trying to grab me. At least this time I actually had to do something for him to fall, it wasn’t automatic.


After getting rid of the vampire, I grab what seems to be a mirror or a silver plate on the ground and can finally progress east (after falling in my own grave once or twice and getting grabbed by the hands because of the hit detection). After a few steps, the vampire reappears but stands still this time.


I’ll call the vampire Bob for now on because it seems he won’t go down so easily so he needs to be named and Bob seems like a suitable name for him. So this time, attacking Bob with the shovel works!

Two more steps and Bob is there again. This time, he is nice enough to let me take all my time in order to pick up the garlic bread and the crucifix lying on the ground.


So now I have a few items to get rid of a vampire : crucifix, garlic bread, mirror. Even the cymbals, fire extinguisher, match and the pen could easily be used. But as we all know now about Enchantia, there is only one way to solve a puzzle. So this time, you have to push the tombstone next to Bob on his foot.


So how are we gonna hurt Bob this time? Simple enough, I eat the garlic bread and make him smell my breath. 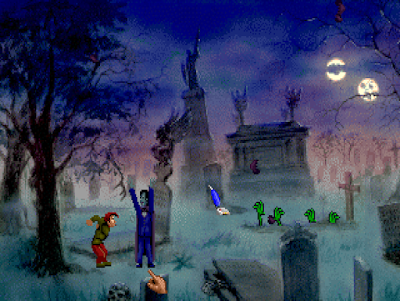 I grab the vacuum cleaner (probably left there by an overzealous graveyard keeper) and Bob reappears.


Attacking him with the crucifix works this time. Pretty straightforward. Let’s move on.


Going farther east, this time, Bob reappears, badly hidden behind a gravestone, waiting for me. He is a bit late though, because I’m already behind him.


I approach him quietly (probably with a sadistic grim) and attack with the cymbals. Turns out this vampire is also sensitive to strong sounds.


Finally, Bob seems to have had enough and he quits his job, leaving the door open.


The next screen holds a skeleton, a flower and a strange-looking tree. Very elaborate, especially considering you can’t seem to do anything with any of these objects and that only one of the three obvious exits works.


So I go into the only walkable exit northeast and arrive in front of a gate with fire-spewing gargoyles. Maybe it’s finally time to use my fire extinguisher? Nope. You just have to walk to the gate and push it.


I arrive in front of what can only be the enchantress’ castle and enter by the front gate. So I’m guessing the whole security of the castle was based on a single pain-loving vampire and two useless fire-breathing gargoyles. I kinda wonder why the enchantress hasn’t been overthrown by the people earlier.


I pass the empty hall of the castle and enter an empty room with a fireplace in which I find a lonely golden ring on the ground.


Trying to climb the stairs in the hall leads to a kinda funny slapstick moment where the stairs give way and Brad falls down face first.


The door on the right leads to a library. Only one book is interactive. I try picking it up but it doesn’t work. Turns out you have to push/pull it because, as in all good castle libraries, it opens a secret passage.


And the secret passage leads to… the enchantress’ laboratory. This is it. The final showdown. The battle for control over Enchantia. The ultimate fight for my freedom.


So the fight goes as this : the enchantress prepares a spell and you have a few seconds to react before she kills/stun you and you can try again. Her first attack is a ghost she sends toward you. 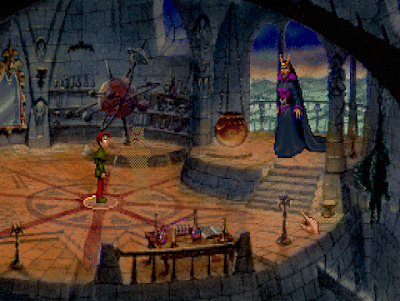 Considering you’re locked in your spot and your only options are using all your inventory items, the whole ordeal is pretty straightforward and relies mostly on trial and error. For now, attacking with the vacuum cleaner works on the ghost.


For her next attack, the enchantress evokes fireballs so the fire extinguisher seems to be the obvious choice. It stumped me a little because you have to PUSH the extinguisher, not ATTACK with it.


She then switches to direct fire blasts in your face which are surprisingly fast. You need to attack with the electric fan to send the blast back to her. 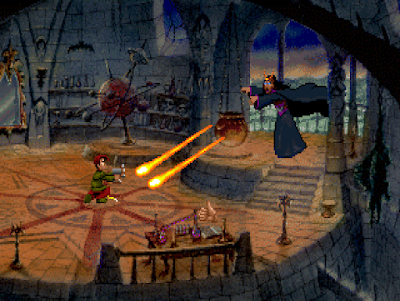 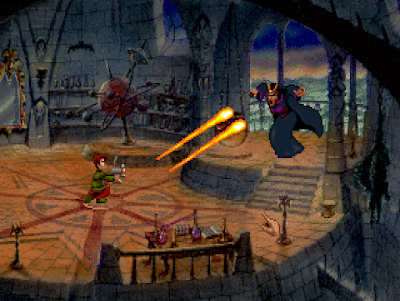 The enchantress collapses and you need to put the ring on her finger (well let’s say you need to COMBINE the ring with the enchantress). Why? At this point I confess I’m just trying anything on anything and not searching for any kind of justification. I’m guessing the ring that was just lying on the floor three screens back was the ultimate weapon against the witch. Kind of another big oversight in the overall security, don’t you think?


And with that done, we are teleported back to the baseball field and are granted a fabulous end screen with Brad doing his victory jump, fist first and smiling at the camera, like the hero of some kind of very bad 80’s baseball underdog movie.


And that’s it! Yay! I can’t help but feel the whole ending sequence has been drastically cut, probably because someone at Core Design felt the whole creating process had been long enough (and probably cutting back on beta-testing as well). Then again, considering the difficulty of some of the other parts of the game, I really can’t complain. The ending sequence is straightforward and could even have been fun (despite its simplicity) if my hatred for the game hadn’t been so high at this point.


For a bit of fun I looked over Let’s play on the net and I found one narrated by none other than Yahtzee Croshaw (of Zero Punctuation fame). Here is a link to it. It’s as funny as usual (if you don’t know his work, I really urge you to look into it, the guy is hilarious) and he comments on a lot of similar points we did (notably concerning the blu-tack for example).

So now, all I have left to do is crush the game with all the might of the PISSED system (which probably never wore its name more accordingly), but in the meantime I have a few questions, I don’t know if anyone can answer but I need to ask them anyway.
Thank you all, folks for your support during this ordeal. I couldn’t have done it without you. See you next week for the final rating!