Oh this is going to be a good one. Like I said in the first post, I’ve already tried playing Enchantia a very long time ago but never really got past the underwater section. Now that I’ve been forced to do so, I discovered what can only be described as a masterpiece in bad game design. Let’s see how it fares in the PISSED system. Spoiler alert: it probably won’t go very high.

This category is, in my humble opinion, one of the most, if not the most, important in the PISSED rating. After all, an adventure game can look rubbish and still be very fun to play because of its clever puzzles. Even the story can sometimes take backstage if the meat of the game (the puzzles, riddles and brainteasers) is a success. Not so much here. Almost all of the puzzles of the game feel random. I can’t count the number of times I felt like a puzzle could be solved in one way or another and ended up doing something completely stupid or counter-intuitive.

Some games contain obtuse puzzles which usually come with a funny or nonsensical world, but most of the time it feels kinda logical, even if sometimes only after the fact. Here, each section contains its own nightmare. Most of the time you just need to pick up random objects to activate a flag somewhere completely unrelated so you can make some progress. Throw a computer on a plank in a cavern literally filled with big rocks. The magician doing random things while you have no reason to think so. The blu-tack puzzle is one of the most stupid things I‘ve ever seen, if only because you have no way of telling what item is in your inventory (more on that in the inventory section). And the examples keep piling up. Even the ending section, where you actually do things that are a bit logical to advance, feels rushed and unsatisfactory.


The only redeeming quality is the fact that you can’t be dead-ended, but putting invisible barriers to avoid that is not the best way to go. It’s the only thing that avoids this category to score a 0.

Final Score : 1. No sense at all in most of the game. Pick up random items and something might occur somewhere else.

Different interfaces tend more often than not to be a miss than a hit. This interface might be the worst thing I’ve seen in my entire life as a gamer. Everything is overly complex and counter-intuitive. I’ve spent more hours in this game trying to do things just because the way the developer wanted me to do it was completely absurd. It’s the graphical equivalent of a bad shareware 80-something text parser, where you have to type TURN DOORKNOB instead of OPEN DOOR. Add that to the stupid puzzles and it’s no wonder I spent so much time on the game. Having so many options with verbs that seem to vary from time to time (once, you need to use ATTACK, another time you need to use PUSH to do the exact same thing) render the whole game sluggish and obtuse. I’ve actually really felt the interface working against me the entire time.

And this inventory. If you go for nondescript items, at least make the graphics of said items look like something, not some blotch of color pixel that could literally be anything. The blu-tack, the deodorant and the golden cloth come instantly to mind. Add the random red herrings that have no purpose whatsoever and items that seem to disappear from your inventory when they want and you have a recipe for disaster.

Final Score : 0. The worst examples of interface and inventory I’ve seen in my entire gamer life.

What story? I mean, Brad is captured and needs to fight the enchantress to go back home. At no point did I have any feeling of advancing through a story but more felt like I was transported from random location to random location. At no point did I feel like I was progressing toward one goal or willingly going to some place (except when you’re set on a linear path like the seabed or the cliff where you just advance on the path until the next roadblock). Even the final encounter feels like you entered the wrong room by accident.

The setting suffers from the same problem where you just feel like locations have been constructed randomly, without rhyme nor reason, from some kind of graphical bank they bought wholesale. At least the scrapyard of madness is kinda funny and original but too much of your time in the game is spent in ugly locations: the grey seabed, the lookalike caves or the neverending cliff are not exactly a joy to explore.

Final Score: 1. Incoherent and random, the world of Enchantia is a chore to explore. And no story whatsoever.

As predicted, this category is the only positive point of Enchantia. The graphics are nice and the animation can sometimes be pretty funny. A few sprites, like the yeti, the parrot or the sea dragon are really nice and well designed and a few bits of slapstick comedy are animated well enough so that they can be funny. I understand that a few critics of the time were impressed by the overall looks of the game. Add to that the little bits of digitised voices now and then (you’re pretty bored by the HELP and HI by the end of the game, but the SHUT UP and a few screams are spot on).


Other than that I have to insist on the fact that the music is simply unbearable. From what Laukku has said, there are multiple tracks on MT-32 and I know the Amiga version has no music, but I have to judge the version I played on. Who thought that putting a bland five notes ditty on a loop for ten hours would be a good idea? It’s infuriating very fast and completely annihilates the few moments of tension the game could have had for itself. The sound effects are nothing to write home about with a lot of sounds effects reused ad nauseam for completely unrelated things.

Final Note: 6. Let’s say it’s a 7 for the graphics, but the music only is enough to make me subtract a whole point.

Meh. The atmosphere really tries to go for a medieval comedy setting à la Monty Pythons but it kinda falls short in every category. The randomness of the whole world really hurts the atmosphere and the environment alternate between the nice and the bland. There is nothing that really stand out and a few things that could have been nice don’t really come together. It’s not enough to put tutus on orcs if you just leave it at that and think “Hey, the orcs have tutus, it’s funny, that’s good enough”. What really made Secret of Monkey Island stand out in its atmosphere is that it cleverly parodies the swashbuckling tropes and runs with it. Curse of Enchantia is more akin to making a pirate fart joke and calling it a day.


A little coherence would have gone a long way in helping the game. Seeing again one of the one-legged monsters from the beginning corridor for example, or another meeting with the giant parrot. The village streets are blocked by a roach-monster, a tutu-wearing orc shepherd and two sleeping mexicans. Not to mention the red and white road barrier that suddenly appears out of nowhere at one point to stop you from going where you want while wearing the pig disguise… What could have been a controlled and fun mess ends up being a simple mess.

HI. HELP. OPEN SESAME. I can add one point for the SHUT UP and another one for a few of Brad’s mimics, but that’s about it. I can dig the fact that the goal was to make a dialogue-free game so that anyone could play, but then it misses the point by adding signs and written puns. Nothing much to say here.

So the final score of this masterpiece of adventuring is (1+0+1+6+3+2=13/0.6) = 22! Putting it between Hugo II and III. I won’t remove any more points because I think I already rated this game rather harshly but considering how bad the whole experience was, this score seems only fitting.

Laukku, you were the only one guessing low enough to earn some CAPs! Well done! 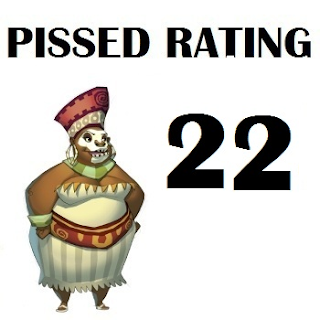 Thank god it’s all over now. I think I’ll play through the entire Lucasarts collection once or twice now in order to forget all about this game. I hope this blog will stay online forever and that anyone even remotely thinking about playing through Curse of Enchantia will read these words and choose instead to go for something more fun, like learning how to juggle with chainsaws. Thanks for reading!

100 CAPs for Alfred n the Fettuc