Who's ready for another Dr. Brain puzzler? It's been almost three years since I played Castle of Dr. Brain, and now it's time to hit the Island! 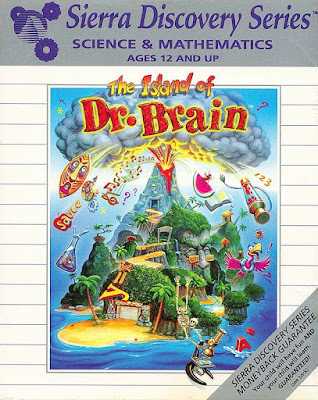 If the cover is anything to go by, the second game promises to be even crazier than the first. An exploding volcano! Watermelon! Lava lamps! And, of course, more flamingoes. Not to mention puzzles. Did I mention puzzles?

Castle of Dr. Brain was part of the Sierra Discovery Series, adventure games that were pitched as being more educational than their regular games, but even then it was unusual in being particularly compelling. As I said in my final rating, even though it only scored 46 on our usual scale, it ended up being more than the sum of its parts and very enjoyable. The first-person interaction as a blank protagonist allowed for really transparent puzzling fun, and the Sierra charm (particularly due to the Coles) permeated every screen. The game sold well, which meant that a sequel was rather inevitable.

Unfortunately, the Coles were not directly involved with the sequel. The Digital Antiquarian has collected some history about how Corey Cole was required to return to his usual programming role in order to work on Sega Genesis tools, rather than continuing his game designing at that time. Still, some of the usual Sierra crew were involved with the project, so we'll have to see how the two games compare as a result. For instance, Brett Miller, who was involved with programming Castle, is credited as producer and director for Island; he also worked on programming for some of the Quest for Glory games. Jon Bock was involved with art for both games, and Robert Atesalp is credited for sound or music on both games. 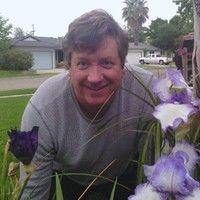 Many of the positions are different, though. In particular, the main designer and writer was Patrick Bridgemon, who has almost no other credits except for the first Police Quest game. He's actually got a current LinkedIn profile, which indicates that after he moved away from Sierra in 1994, he never returned to game design, although he stayed in the field of computer programming and reporting.

At the end of the first game, you may recall, once the player has solved all of Dr. Brain's puzzles, then Dr. Brain offers congratulations as well as an assistantship. And then he disappears to go make more puzzles, which is a rather abrupt way to start a relationship with one's new hire, but it's just par for the course in a game where the plot was only really there as an excuse for the puzzles.

Unlike Castle's curt beginning with a view of a mildly sinister bridge leading up to the castle building, Island has an introductory sequence that sets up a bit of plot: the plans to Dr. Brain's latest project have been stolen, but fortunately they don't mention a critical component: a special battery. The player's first assignment as Dr. Brain's assistant is to fly to his private island and retrieve this battery. Naturally, it has been hidden behind many puzzles.

The location of the island is the first puzzle and also copy protection, so with the manual, it's pretty simple to give the pilot the correct coordinates for the specified symbol, and off we go!

Castle offered "hint coins" that could be used to buy hints, while Island offers "hint calls" using the Hint Watch, which will call Dr. Brain for a strategic hint or part of a solution. Two are available at the beginning, while solving puzzles without hints accrues additional hint calls. Many (all?) of the puzzles are immediately replayable, though, so it's possible for a player who is strong in some areas to accumulate hint calls to use on puzzles in more difficult subject areas.

The interface is the same as Castle, with the standard Sierra bar and icons. The player starts with two items: batteries for the hint watch and an Achievement Board, which acts as a detailed scoring mechanism. It shows at a glance which types of puzzles have been solved and at what level (bronze = Novice, silver = Standard, gold = Expert), as well as the total score. The bar itself is decorated with palm trees on each side. The board is interesting, but it's rather spoilery to the player, as it names all the different subject areas that the puzzles will cover. In Castle, you didn't get to see all the subject areas until you had to fit them into the grid at the end of the game. Here in Island, it's all visible up front.

Another improvement over Castle is that all the puzzles are randomized to some extent, not just the copy protection. While Castle was received well, one complaint was that it was short, with little replayability. So Island's randomized puzzles will offer more replayability, and possibly more interesting puzzles. The achievement board keeps track of how many puzzles have been solved at each difficulty, which seems to offer extra points for replaying the puzzles.

As with Castle, I'm not going to do journal entries given the faceless protagonist. Likewise, especially since I've played the game before, I'm going to play everything on Expert difficulty, at least for the first time for each puzzle, although I might replay some on other difficulties just to see what that does. And I'll avoid using the hint calls. So next time, we'll dive into the puzzles, starting with the Polyomino Puzzle.

If you'd like to play along, you can find the game available on the Internet Archive.