The Castle of Dr. Brain (and the other Dr. Brain games) was one of my favorites as a kid. I was into numbers and puzzles, so while the adventure elements are very light, the variety of the puzzles, plus the trademark Sierra wacky humor, made them so much fun to play.

There's not much for story here: the Castle of Dr. Brain itself is just a setting for the wide variety of puzzles you face. You're unceremoniously dumped at the front door of the castle, and one puzzle after another awaits. The documentation will tell you that the goal of the game is to win a position as Dr. Brain’s position, but the game itself doesn’t tell you that until the end.

The game was advertised as being educational, along with other titles like Bookwyrm’s Mixed-Up Fairy Tales, Mixed-Up Mother Goose, and Ecoquest. Below is a page from an original Sierra catalogue (courtesy of sierrachest.com) describing Castle of Dr. Brain as having an “outrageous gauntlet of mind-twisting puzzles and nerve-wracking challenges.” As a job interview, it’s pretty outrageous. As a game, it’s really not very nerve-wracking, but you know, it’s aimed at 8-10 year olds. I don’t think I ever wondered as a kid if real job interviews ever involved solving puzzles. I should have, because the interview for my first job out of college included a hands-on test in Excel and Access (it was a data analysis job). 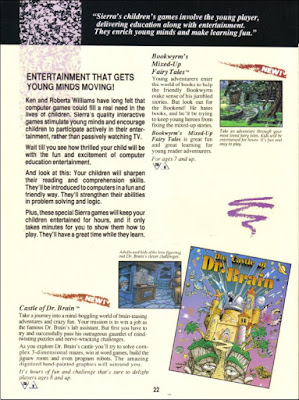 The controls are the same as any Sierra game of the era: right-click to switch between the eye and the hand; left-click to examine with the eye or manipulate with the hand. Inventory and other options are only available from the bar at the top.

I'm not going to bother with the "journal" sections for this game because there's no distinct character voice or need for immersion. Literally the only things we know about the PC are that he wants to find Dr. Brain, and that he's good at puzzles and persistent (if he gets to the end). TV Tropes even calls him a Featureless Protagonist.

The game offers three difficulty settings: Novice, Standard, and Expert, and this can be changed at any time. I'm going to be playing on Expert level because I've already finished the game some years ago. Plus I'm probably better at puzzles now than I was as a kid. The game also offers the possibility to "buy" hints or partial answers with "Hint Coins," and starts you off with four, although I'm not going to use any. I’d probably first put out a request for assistance and let you guys chime in, if it comes to that (which I don't expect it will).

The game opens with a bit of an animated sequence culminating in lightning illuminating the castle itself, showing how very strange it is. The opening music starts with Bach's classic Toccata and Fugue in D minor. You might think from this that there will be a horror theme to the game, but there's really no sign of this later. Mad scientist craziness, yes, but not horror.

When the first screen appears, it's clear that Dr. Brain's taste in decoration is just as bad as might be expected, given the mad scientist archetype. Who puts flamingoes by their front door? The only thing to do here is ring the doorbell. Naturally, rather than summoning anyone to open the door, this triggers the first puzzle, which is a take on Memory.

Castle of Dr. Brain is available on the Internet Archive for anyone who would like to play along with me.

I could find very little about the history or making of the game. If anyone has anything to share (I’d love to hear some stories about this game from Corey Cole!), please leave a comment. Or if you have stories or memories about playing it, do share.

Note Regarding Spoilers and Companion Assist Points: There's a set of rules regarding spoilers and companion assist points. Please read it here before making any comments that could be considered a spoiler in any way. The short of it is that no CAPs will be given for hints or spoilers given in advance of me requiring one. As this is an introduction post, it's an opportunity for readers to bet 10 CAPs (only if they already have them) that I won't be able to solve a puzzle without putting in an official Request for Assistance: remember to use ROT13 for betting. If you get it right, you will be rewarded with 90 CAPs in return. It's also your chance to predict what the final rating will be for the game. Voters can predict whatever score they want, regardless of whether someone else has already chosen it. All correct (or nearest) votes will go into a draw.
Posted by Ilmari Jauhiainen at 23:00