Some people might say that this game doesn't even really belong on this blog, as it's mostly puzzles rather than an adventure, but enough people were enthusiastic about adding it to the list, so let's see how well it stacks up on the rating scale. Personally, I had a lot of fun playing it, although some of that is certainly bolstered by nostalgia.

Oh boy, puzzles. This game is 95% puzzles, but they're all the classic kind of mental puzzle, not the usual inventory or dialogue adventure-style puzzle. They're not even the integrated mechanical Myst-style puzzle. Still, there's a lot of variety, from sliding tile puzzles, to mazes, to math problems, to programming, to language puzzles.

Generally the puzzles are perfectly logical and solvable (although the constellation star choices were a bit iffy), and I found no dead ends and was never stuck. Probably this is in part because the game is aimed at a younger age group, so on the whole I found the difficulty pitched a bit too easy, even on Expert difficulty. (And I've played a lot of puzzle games since the first time I played this and have seen a lot of the classic puzzles before.) But I prefer that to banging my head against illogical or impossibly difficult puzzles. The sense of accomplishment is also bolstered by the in-game awards received for solving many of the puzzles or areas, which are then incorporated into the endgame job skills puzzle.

Although at the time the puzzles were still reasonably fresh, especially as a computer version, many would be cliched and unoriginal today, particularly the earliest puzzles (Memory/Simon, sliding tiles, magic squares, jigsaw) and the pure math and language puzzles (arithmetic, binary conversion, cryptogram, hangman). The skills these classic puzzles require could have been incorporated into more original puzzles. For its targeted age range, though, it's designed very well.

The interface is the classic point and click Sierra interface, with the eye/hand cursor to look and interact with objects. The inventory is graphical, and objects can be examined after acquiring them. I only had to actively use an item from inventory once or twice; more often items were important for the information they carried, and often they would be used automatically in the right place after acquiring them. It's a fantastic introduction to the Sierra interface because it doesn't require very much of the player.

There's no movement within rooms; usually the only movement is between rooms, usually by clicking on doors. The exception is the elevator mazes, which have their own supplemental interface in the form of the blobber-style arrows. Fortunately the arrow keys work just as well, saving the mazes from being a tedious click-fest.

The story is minimal, just enough to hang the puzzles on. We're still in the era where users are expected to read the manual before playing the game, as the concept of the PC applying for the job of Dr. Brain's assistant is not even mentioned in-game until the last main location (Dr. Brain's office). The castle itself is again just a setting for the puzzles, as it's disjointed, with variously themed areas separated by the elevator mazes, but it's fun and interesting. It's rather inconceivable that someone would build an entire puzzle-filled castle solely for the purpose of testing visitors for their suitability to become one's assistant. But I suppose it's very much in the vein of a mad scientist who's become wealthy and eccentric from selling various inventions. The castle is fun to explore, but it doesn't really make much sense.

Aside from the occasional puzzle interaction, like the hangman and the robot heads, there are no other characters in the game except for Dr. Brain himself, who does not appear until the very end. There is no dialogue external to puzzles (or the ending) and no plot development except for winning the assistantship. This isn't bad; the game clearly does what it sets out to do, but I can't rate it high in this category simply because there's not much there to rate. The only interaction is solving puzzles. Beyond that, there isn't even closure at the end because Dr. Brain runs away to go construct another set of puzzles for the next game.

The game opens with the iconic beginning of Bach's Toccata and Fugue in D minor. Aside from that, though, while the music was atmospheric in places, it was fairly unmemorable. Most actions have appropriate sound effects: ringing the doorbell, various clicks for manipulating puzzle pieces, etc. In general, the sound was functional and unobtrusive.

The graphics are colorful and wacky, but rather low-res. The castle is often beautiful in a rough way, with quirky details on nearly every screen. Animation is often jerky. The game often jumps from one state to another (such as when opening a door) rather than showing any animation at all. The focus is more on the puzzles rather than the package, and the animation that does exist serves the puzzles.

The game seems to be trying for a creepy vibe near the beginning, but quickly gives that up for a matter-of-fact presentation of one puzzle after another. If you just start the game up without knowing anything about it, you'd get creepy music and a castle to explore just because it's there, but the wacky decorations, the straightforward puzzle lineup, and the continual congratulations for making progress really defuse any creepy atmosphere. By the time you get to the end, the curtain is pulled away, and there's no mystery at all: the whole thing was simply a test, and the designer of the test is pleased that you passed it. The overall atmosphere is simply wacky.

The game says that the observatory is in the basement (and makes fun of Dr. Brain for putting it there), but given everything that led up to it, it would make more sense if the observatory is actually at the top, and solving the puzzles and exploding the monolith then sends you all the way down to the office in the basement. Plus the castle from outside appears to have an observatory dome on top. Or maybe the impossible geometry is just part of the wackiness of the castle. But everything else you see is connected sensibly, more or less, so that's rather inconsistent.

The castle also looks huge, based on the initial shot from across the bridge, but to me it didn’t really feel much larger than a tall house, aside from the strange mazes. There was an opportunity here for some really sprawling, eclectic architecture, not to mention references or glimpses in-game to some of the odd things seen on the exterior, but there’s none of that.

As I mentioned above, there's no dialogue with characters, so most of the text involves explaining puzzles or cracking jokes about wacky decorations. The puzzle descriptions are clear but functional: this is clearly a game, rather than a story about a person exploring a castle. The jokes are amusing, but are often based on bad puns (typical for Sierra). Without dialogue, though, there just isn't all that much text in the game.

Most of the gameplay is solving the puzzles, because you don't need to look very carefully at things to find them, usually. It's also a rather short game if you aren't having to spend a lot of time solving the puzzles. There are only about ten rooms, most with two or three puzzles, plus the three elevator mazes. And there's no need for backtracking, as the next room can't be reached until the current one is completely solved, and all important objects are automatically collected.

That adds up to a final score of 7+7+1+5+3+4 = 27/60*100 = 45. I'm going to give the game a bonus point though for being so much fun to play. Despite the lack of plot and the less than original puzzles, the Sierra charm shines through, and the total package is somehow more than the sum of its parts. Maybe that's nostalgia talking, or maybe it's just that well-designed. So the final score is 46.

Twelve people made guesses ranging from 36 to 52, but nobody guessed exactly 46, probably because it isn’t a score normally reachable without the effect of a bonus point, due to rounding. So Ilmari and Deimar are both closest to the final score. 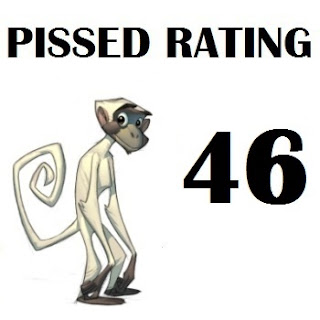 100 points to Reiko
60 points to Ilmari
20 points to Corey Cole
10 points to Deimar
10 points to Joe Pranevich
10 points to Aperama
10 points to Laertes
Castle of Dr. Brain is finished! Up next from me later in 2016 will be another educational game, Ecoquest. But for now, back to your regularly scheduled adventure gaming.


Current rankings for the 1991 games: