Jason Roberts Journal Entry #5: I'd guessed I needed an arrow to enter the secret door – but for some reason two perfectly obvious arrows that I saw in a treehouse weren't the ones I needed – I needed one that was hiding behind a bush – Bravo, Amazon jungle – you outsmarted my logic and observation with your unnecessarily specific arrow requirements.

Okay, let's get this confession out of the way early.

After trying everything I could possibly think of behind the waterfall (and reloading my saved game multiple times because I can only try a few things before dying) I was totally out of ideas.

Rather than request assistance without having made any progress, I decided it was time to test out the game's hint system. I turned hints on and question marked some of the items in the area. 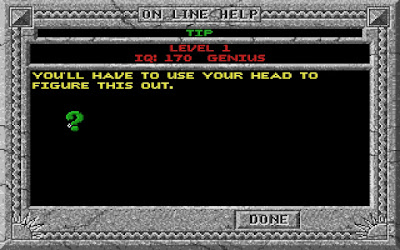 Hmmm. So perhaps I need to get the arrow carving tip at head level before talking to it? I'd tried talking to all parts of the door hoping one of Maya's people was on the other side, but had no luck. I didn’t have any luck trying to get my head in line with the carving and then talking to it either, so I checked out another hint.


“THIS IS WHERE THE ADVENTURE COMES TO A HEAD.”

Great. So now I've spent two tips on basically the same information. Thanks, hint section. Any other hints that might be useful?

So maybe I need to step on each section of blood to open the door? I tried a few more things based on those hints. And I checked out the other hints in the area. But none of the level 1 tips helped. So I turned on more detailed tips.

Checking out a level 2 hint on the arrow carving's tip gave me an answer.


I was a bit upset that the two hints about using my head were only useful if I already had an arrow head in my inventory. I seriously doubt the kind of person who wouldn't have tried using an arrow head on an arrow head carving would have gotten this fair in the game in the first place. Anyway,  let's get back to it.

Reloading back to the campsite, I used my geiger counter everywhere. The jeep and the left side of the jungle had 'high' amounts of radiation. I clicked all around the jeep and jungle in case part of it was a different hotspot, like the middle of the bridge or truck door earlier. Apart from the other trees in the surrounding jungle, there are five light green coloured bushes in the game. Four of them give the same name and description as the rest of the background -


JUNGLE - The steamy jungle surrounds the site of the massacre. Jungle plants are already starting to encroach on the clearing made by Allen’s party.

One of the bushes does not have the same description, and can be moved. Is it graphically different to any other part of the jungle? No - no it is not. Does this annoy me? Yes - yes it does.


So, now I have the arrow I need. It's back to the waterfall. But first...


On the bright side I did discover a new death I hadn't seen before – we get eaten by cannibals if we take a wrong turn on the river.

So, back at the waterfall I can now I use my arrowhead on the arrow carving and the secret passage opens.


The statues shoot at me for a while as I dodge their arrows to get partway across the bridge. Then Sanchez breaks through the secret door and goes totally insane.

Luckily, Sanchez and his men shoot the stone sentinels first instead of me.


I quickly come to the solution (after getting shot by Sanchez the first time through, of course) - I use my lit explosives on the bridge and leg it to the other side.

Now that I've destroyed the people trying to steal the emeralds and expose them to the outside world, I'm sure the Amazon women will be happy with me. 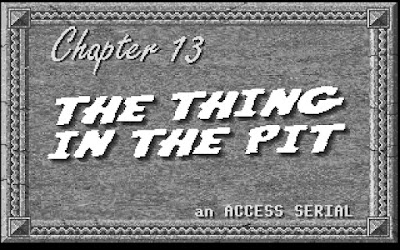 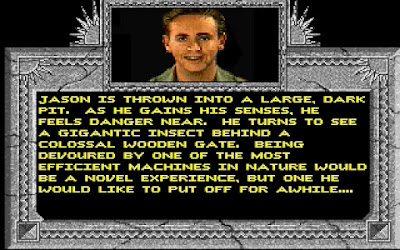 The next scene gives me time to do a few things before a large gate opens and a giant ant walks towards me. Unsurprisingly, I die the first time.


Having looked around before dying the first time, I spring to action on a reload and do stuff as quickly as I can. 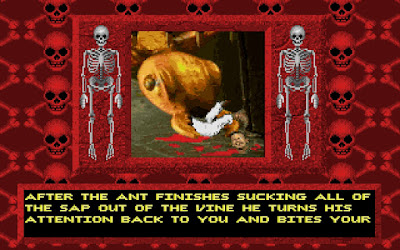 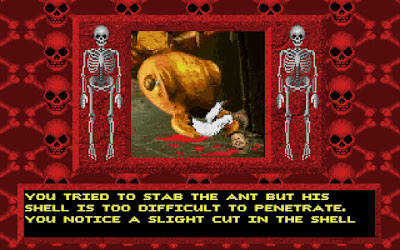 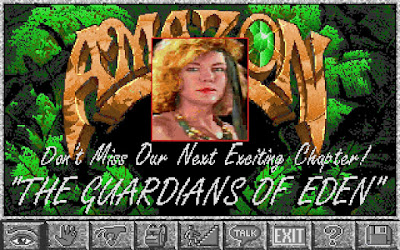 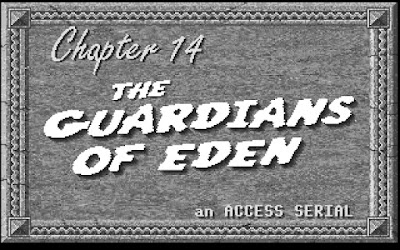 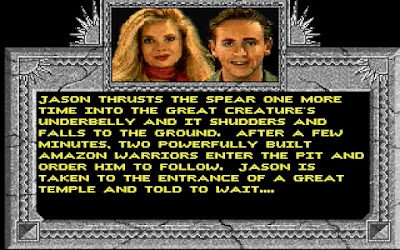 An Amazon woman appears at the temple doorway. It's Maya, but it seems she's been given a makeover. 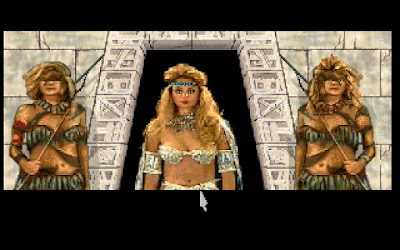 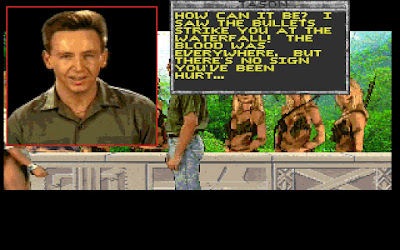 Well, it turns out the 'gift' the Amazons had been protecting is magic water. 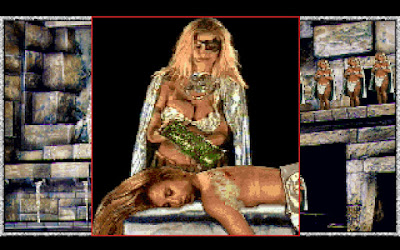 The water gives the ability to live forever but the price of receiving the water is that you can never leave and must serve as a priestess in the temple.

I'm not sure if the magic water reminds me more of the Fountain of Youth, which some legends place in South America, or the Indiana Jones version of The Holy Grail, which has the same rules as this water.

Then Maya says something I don't fully understand... 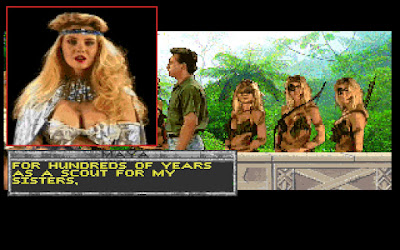 Wait. You're telling me you've been scouting for hundreds of years, but you've only just now received the never-die water which forces you to stay in the temple? So the average lifespan of a non-magically-watered Amazon is already counted in hundreds of years? 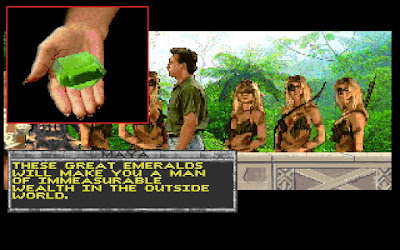 Maya offers me the emeralds on the condition I reveal nothing about her people. But she gives me another option.

Question: Will all the other Amazons put on their formal bikinis for our wedding? 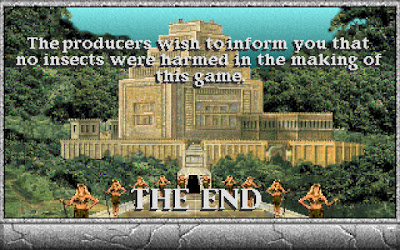 I didn't get to choose the emeralds instead of Maya, as Chapter 14 was entirely a non-interactive cutscene, but let's face facts, I would have chosen Maya anyway.

And now that I've finished the game I reload my waterfall save and try to waste all my hints so I can get the less complete ending. I'm pretty sure Access got their best pun writer to write these hints.


In my effort to waste hints, I end up using so many that the game stops giving them to me and insults my intelligence. 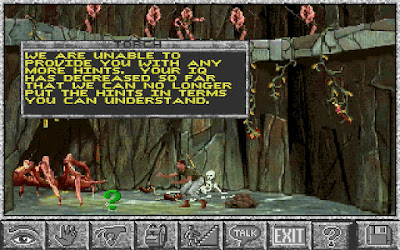 So, I play on and get mostly the same ending as before, but instead of getting the girl and winning the game, I get some cartoon failure music while Maya turns her back on me and breaks the fourth wall. 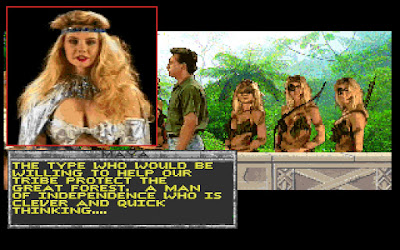 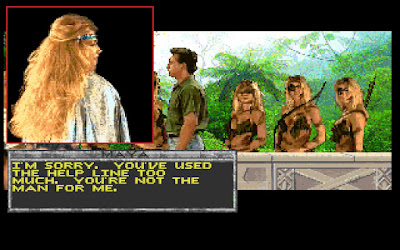 Next week I'll give the game its Final Rating. I'm expecting a lower score than I thought before I played. The story's fun, but too many of the puzzles involve frustrating the player.

Session time: 1 hour 5 minutes
Total time:12 hours 5 minutes
Inventory: I probably still have Jason's car keys - maybe I can send them back home and give Male and Female guard a car for a wedding present!
Actors in the credits using their stripper names: 4 – Dixie Kupps, Candy Barr, Bobby Shorts and Flint Eastwood
Posted by TBD at 23:00