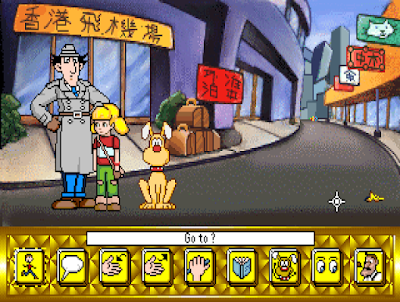 Here we are at last, Hong Kong! In my west-to-east tour of the world of Inspector Gadget, this is the last stop. I’d be lying if I said I wasn’t ready for the game to be over at this point, but it’s actually been a fun ride. I am curious to see how well (and if they bother) to adapt Hong Kong as part of the game. Will it be culturally accurate like our recent trip to Moscow? Or as generic and white-washed as Nairobi? The opening screen both terrifies me and gives me hope: the airport screen is identical to the one in Rio de Janeiro! The “Portuguese” signs are now in Spanish and there are no Gadget-clones running around, but otherwise it is the same. But in all that there is a glimmer of hope: I had a Chinese friend check out the signs and he claims they are all accurate! The yellow sign is for the Hong Kong Airport while the red sign really does say “No Parking” in Chinese! That represents a surprising amount of effort for the designers and I am eager to see if the same level of detail is applied throughout the rest of the adventure.

We talk to Gadget and the conversation has me puzzled. He tells Penny that Hong Kong is the home of the “shiny green suit”. Penny replies that Hong Kong is a free port where you can buy just about anything, but he insists that he wants a “shiny green suit”. What is up with that? Is this a dated cultural reference that I am missing? CAPs for anyone that can figure out what the heck they are talking about.


Other than chatting up Uncle Gadget, there is nothing to see or interact with on the first screen except for one thing: a banana peel in the road. When Penny picks it up to dispose of it properly, she is immediately assaulted by a giant Chinese parade dragon. It quickly swallows her and Brain before any of them have any time to react. This is the first time in any of the episodes that Gadget himself witnessed Penny getting kidnapped. I’m sure this means that he’ll be coming to rescue us any minute! While this may be one of the more stupid traps ever laid by M.A.D., the animation for the sequence is fantastic and it’s clear a lot of work went into the design of the dragon at various angles and sizes. Kudos!


The inside of the dragon is surprisingly roomy with a M.A.D. thug controlling the dragon with a stick. And… this is where the art department clearly fell down. A traditional Chinese parade dragon is controlled in large part by sticks such as these, but the M.A.D. agent should be walking with it and not standing still inside of a room. It might be intended to depict a robotic dragon and that would make sense, except the agent’s dialog clearly says that he is needs to concentrate to control the dragon or else he will slip. The dialog thinks he is running along with it, but the art shows no such thing. I guess they spent so much time animating the outside that they neglected to make the interior make sense…

As you expect, the agent refuses to let us go and there seems to be no way out except back through the mouth. We key on the agent’s dialog that he is afraid of slipping and use the banana peel on him. Penny sets it in front of him and he, for absolutely no reason at all, walks forward to step on it! It’s dumb and clearly the art department didn’t know what to do with the script, but the resulting distraction allows Brain to escape! Penny remains trapped and gets thrown into a cell. Typical, eh?


The scene changes and Penny finds herself locked in a wooden room, with a wooden floor, and a wooden crate, and absolutely no smoke alarms. There is a window high above that we cannot reach, but the solution is obvious: Penny pushes the crate over to the window. Hidden under the crate is a trapdoor containing Gadget’s umbrella and seltzer bottle. If those seem useful to anyone, please let me know, but we pocket those to return to him later. Climbing the crate, Penny can get a look outside now and reveals that we are on a boat. Or rather, we are on a restaurant on a Chinese junk, conveniently called The Junk. How she can tell all that just by looking out the window, I have no idea. We call Brain and it’s time to be rescued. 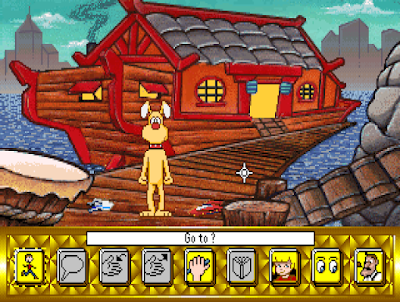 Brain, back at the airport, is able to access the Hong Kong map. There’s not too much to see there yet, but we find the Junk on a dock near the harbor. Entering the restaurant is impossible because they have a strict “no dogs” policy, but that’s okay. Hidden around the boat are components of a complete waiter’s outfit. Maybe someone quit and throw away all of their clothes in a huff? (Did they walk back to their house in their underwear?) Once Brain is wearing his disguise, we have no difficulty getting into the restaurant.


As soon as we arrive in the restaurant, we overhear one of the waiters complaining that they are out of little paper umbrellas. Is that a pertinent fact? I have no idea, but since the waiter was speaking English, I am going to assume that he is a M.A.D. agent. Although we cannot interact with him, the room is dominated by a picture of an American (?) tourist reading a guidebook, the Pun’s Fun Guide to Hong Kong. I cannot imagine they would use so much screen real estate without it being part of a joke, but I have no idea what 1990s travel guide they might be spoofing with this. Does anyone have a guess? Ultimately, the only thing that we can do is use the door in the back of the room to head deeper in the restaurant. Instead of getting another puzzle, we are immediately taken to Penny and rescue her. That was easy! The waiters even let us walk out without a sideways glance.


The only other location on the Hong Kong map is, of course, the paper umbrella factory! Obviously, the conversation about being out of paper umbrellas was pertinent after all, although exactly how M.A.D. is using them in their evil scheme is beyond me. Maybe part of their scheme is just running a very tacky restaurant for tourists? When we arrive, we find that Gadget is already there, shopping for replacement gadgets. Apparently, he was trying to replace his “gadget umbrella” with a paper version, without realizing that the paper versions were tiny. We hand Gadget back his lost umbrella and seltzer bottle, inspiring him to try to return all of the paper parasols that he purchased. (Try saying that ten-times-fast!) We are unable to follow Uncle Gadget inside because once again there are “no dogs allowed”.

Fortunately, there is an umbrella, bowler hat, and other accoutrements scattered around that Brain can produce a “English businessman” costume. But if there was an umbrella just sitting there, why didn’t Gadget take that instead of buying tiny paper ones?


Once we are inside, Gadget immediately latches onto Brain to try to return the paper umbrellas that he bought. Considering that Brain is not Chinese, nor is he likely to look like the shopkeeper that he bought the umbrellas off of five minutes ago, I’m not sure why he would automatically assume that he worked there. Either way, it keeps him distracted enough for Penny to explore the room. The rolodex in the room is a giant set of Easter eggs: the (M.A.D.?) owners of the factory are huge gaming fans and they have address cards in there for Azeroth, Broderbund, Electronic Arts, Maxis, Sierra, and Virgin. That is a slightly odd set of companies, At this point, Broderbund would have been most famous for their Carmen Sandiego games, as well as Prince of Persia. Maxis was already famous for its SimCity spinoffs. If you are reading this blog without knowing what Sierra was up to in 1992, you might be beyond help. But EA and Virgin? Neither of them had any educational or adventure games of note by this point. EA had published a number of sports games and Populous, but I am uncertain what Virgin games the developers (and M.A.D.) were interested in. Any ideas?


Deeper inside the factory, Penny and Gadget discover the location’s true purpose: it is the hiding place of U.N. ambassador Monica Adams! She is busy individually spray-painting each umbrella as it goes by on the conveyor belt. We can pull a lever on a nearby machine to stop the conveyor belt, but that doesn’t wake her up from her stupor. With nothing further we can do to the machine, I have Gadget use his gadget umbrella which somehow manages to sweep him off his feet (because it is so windy in the factory?) and he crashes on the conveyor. That wakes up Ms. Adams and she is relieved to have been rescued, even if a little confused by how she ended up in Hong Kong. Back at the airport, we get the report that something seems to be going on at the U.N. building in New York. It’s finally time to head for the grand finale! 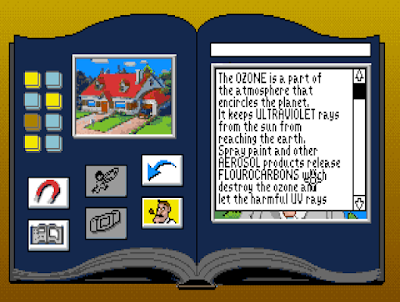 This week’s environmental lesson is about the ozone layer and the harm done by CFCs. Once again, I regret that much of my knowledge on this subject comes from doing a quick series of web searches. In particular, the game focuses on the use of CFCs in aerosol products. This ties in nicely with the fact that Monica Adams was using a can of spray-paint to make the white paper parasols into yellow ones. In the real world, using CFCs as a propellant was banned by the Montreal Protocol, signed in 1989. As a result, we have seen a decrease in amount of CFCs released into the air and a leveling off of the ozone layer hole. 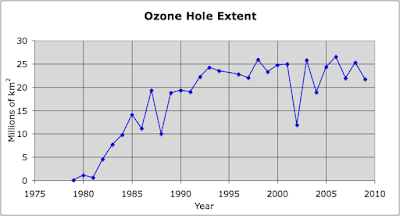 As far as I know, I haven’t heard about any U.S. politicians deciding to get out of this environmental treaty.

And with that, I am going to end this episode. Join us next week for what I hope will be the thrilling conclusion! Will Gadget save the day? Or will Penny and Brain just get kidnapped once again? I have no idea! See you then!
Posted by TBD at 23:00