For game developer, a hybrid appears to a lucrative possibility. Why satisfy yourself with selling a game to adventure game fans, when CRPG fans might also be a potential target of marketing? Yet, making a hybrid is also a risky endeavour, since you might end up alienating both target groups. And indeed, the risk seems quite real, since for every Quest for Glory we have a game like B.A.T. and its successor.

It is interesting to consider what makes Quest for Glory -games so good hybrids that both dedicated adventure game fans like me and dedicated CRPG fans like Chester Bolingbroke can appreciate them. A complete answer would require a whole series of articles, but I guess one aspect in the success of this series is that the Coles have managed to avoid some excesses of both adventure game and CRPG genres that usually make people avoid these genres and still retain enough challenges proper to the genres that fans won’t feel the games are dumped down. Or in more concrete terms, there’s enough puzzles to consider for my taste, but they are not as convoluted as in some adventure games, and there’s enough chance for grinding for Chester, but thankfully not so much need for it that I would get bored.

And here we come to the crux of what is really wrong with Koshan Conspiracy. B.A.T. II does everything completely opposite from Quest for Glory. It fails to engage me as an adventure game and it has enough CRPG elements that make it distracting for me. I’ll try to explain myself in more detail when rating some of the individual categories.

But first I want to tackle one crucial question: what sort of hybrid is Koshan Conspiracy? Mobygames lists the game as an adventure/strategy-hybrid. I don’t really see the strategy-element here, unless they are speaking of the Chinese Checkers minigame. Then again, there are some clear CRPG elements in the game, like attributes that change throughout the game, variant playing styles allowed by changes in attributes (do you do everything by yourself or use your charisma to recruit followers?), money grinding, at least partially non-adventure like inventory etc. It doesn’t feel like a complete CRPG, but then again, it doesn’t feel like a complete adventure game either.

And this category has a lot to do with why the game fails as an adventure game. There just aren’t real puzzles here! The average “quest” of the game goes something like this: you are outright told to collect a few items, you explore a bit, find the shops that sell the right things (or waste your time trying to find that single person in the whole solar system who owns them), grind for required money and/or take your chances with stealing, play a simulator to get to the place, where you are meant to use the items, and watch a fancy animation that shows you how you do it. In addition to non-adventurish things like grinding and simulated flying, where’s the challenge?

To be honest, there is one intriguing puzzle - how to get a praetor pass? - and the game messes even that by letting the player take an advantage of a bug to pass the obstacle. When I also take into consideration the unsolvable end problem, I really have only one option to choose.

I haven’t played the first game of the series, but judging by what both Aperama and CRPG Addict have said, this shows some improvement. Both of them complained that the interface was needlessly complex, because many of the options available were simply unusable and thus worthless, for instance, stealing didn’t appear to do anything. Here, the interface is still complex, but at least the options do something - for instance, I basically sustained my character with stealing. Some options even appear to make the gameplay more tolerable, such as the ability to move the clock forward by an hour.

Still, even with these advantages, the interface is too complex for an enjoyable experience. Just look at the inventory. You get a complex hierarchy of different levels of containers, which seems completely useless, since you can just wear everything on your body - and no matter whether you use containers or not, you’ll end up with so many items that it is just painful to find what you are needing. You have hands as containers, but it makes no difference whether you have an item in your hand or not - for instance, you can shoot with a gun, even if it is inside a bag in a knapsack. When you remember all the little bugs I encountered, it becomes clear I can’t give high marks for this category.

I’ve been quite harsh to the game, but now I can finally give some credit to it. I know I’ve made fun about the ridiculous paper deeds, but that’s just a minor thing - really, who in 1990s could have guessed how far digitalisation would have gone in few decades? When you ignore this, the basic premise is quite adult in its tone - you have to gain a controlling interest in a business important to government. The plot development with all the conspiracies, murders and mayhem is quite intriguing, if a bit cliched, and it is only the last denouement with the death of the robot king that fails to be convincing.

And what failings the plot might have is amply compensated by the setting. I know Romish planets have been done to death in scifi since Star Trek. Yet, Shedishan manages to be quite a refreshing location, with a believable take on a Latin-inspired civilisation. Even greater thing is that Shedishan still has some remnants of the original, non-human culture, and there are hints of conflicts between the two cultures. All in all, I am feeling quite positive about this category.

Few years can sometimes do marvels. While the first B.A.T. seemed quite drab, B.A.T. II more than makes up for it. Backgrounds were quite nice and especially cutscenes looked gorgeous. Only the simulator parts seem downright ugly - I am sure polygonal graphics were so edgy and new that you had to put it in every game, but darn this looks dated now. Music was pretty mediocre, but there were some nice sound effects occasionally.

It might be just my general non-interest in CRPGs and flight simulators, but despite the interesting setting, the game just failed to grip me. So much of the playing time was wasted in flying or gathering money through playing or stealing. There was a general lack of good timing in the game - potentially intriguing scenes were unnecessarily lengthened so that they became just sources of nausea. For instance, being jailed and becoming a gladiator was an interesting plot twist, but the main thing I had to do during this sequence was just wait for hours to go by. If the producers wanted to create an atmosphere of boredom, the game sure managed to do it perfectly. It’s not like the game was a complete disaster. It just failed to live up to the potential it might have had.

Back when CRPGs were new thing, the game world could be filled with characters who all said pretty much the same thing or at most had a few possible stock lines from which to choose - “Ugh, me tough”, “Trebor sucks” and similar stuff. In time, computers evolved and CRPG developers could actually create characters with their own individual lines to say. This was a natural evolution and games became lot more intriguing with it. But there were still old-fashioned game developers who thought creation of interesting and complex characters would be mere hindrance. B.A.T. II was one of those games. It’s quite ridiculous that not just the random persons running around the street, but also named characters have nothing to say beyond the stock lines. You know something is amiss, when a rather unappreciative opinion on a senator is agreed upon even by the man himself.

In French-produced games the quality of English is often quite problematic. Here, the in-game text is reasonably good, but the text of the cutscenes is full of silly typos and multiple exclamation marks. It almost seems like the text of the game has been written by two persons and only one of them knows how to spell praetor. 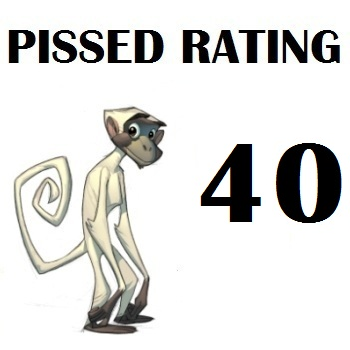 The first game of the series received only 30 points from Aperama, and the difference appears to be mostly due to the sequel having a somewhat more coherent plot and noticeably better graphics. Furthermore, the original had inexcusable bugs that almost prevented Ape from completing the game. 40 seems a quite appropriate score for a game that has high ambitions and intricate plot, but fails as a fun game, so I won’t be handing any bonus or minus points (most fittingly, Eternam, the game I traded to Aperama for Koshan Conspiracy, also received 40). That means Alex Romanov had the closest score guess. Congratulations!

I will now be taking some well-earned time off from reviewing, while Joe will soon move on from Inspector Gadget to Hitchhiker's Guide to the Galaxy. The next mainline games will be played by Voltgloss, who will face the final game in the Spellcasting series, that amalgamation of American Pie and Harry Potter, and TBD, who will check possibly the best installment of King's Quest series.

CAPs to Ilmari
91 CAPs to Laukku
65 CAPs to Michael