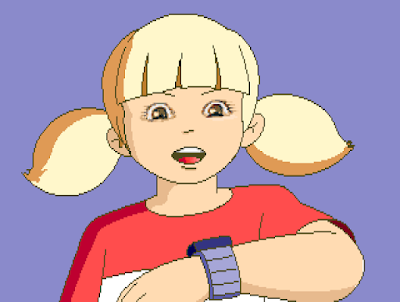 The evil Dr. Claw has escaped and the Earth is saved from an environmental catastrophe for a few years. We have recovered Uncle Gadget’s gadgets, at least most of them, and need to go buy a new TV. Most importantly, we have reached the end of our Inspector Gadget coverage and now it is time to rate the game. I am always uneasy rating a kids’ game, but actually I think this one will do okay. I enjoyed the game much more than I expected. I did get bored for a bit in the middle, but the high-quality of the writing kept me exploring even as I knew how the plot beats would play out.

Let’s see how the game does by the numbers!


Puzzles and Solvability
It is somewhat difficult to rate the puzzles in this game because the difficulty level was set pretty low given the audience. Even so, there is a lot to like: two characters to play with that can be at different locations, a basic structure for object-combination puzzles, and clever or humorous solutions to the problems in front of us. It is true that the puzzles overall are too easy since there is usually only a minimum number of things to interact with in each room, but I still found myself stuck once or twice (at least for a little while). The costume puzzles were barely that once we figured out the mechanic of Brain’s disguise in each location. The included hint system is quite nice for kids and in-character for the series. Even Brain gets to call Chief Quimby when he needs help! So in total, it’s a kids’ game and too easy, but never awful. Well, almost never: the pixel hunting to find the keys (that you have no way to see) in the drawers in Rio still ranks up there as unabashedly terrible. Fortunately, while they had similar things in other locations, none of them were as bad. One more drawback is that there were no puzzles at the end where you had to use the gadgets you collected throughout the game to solve anything.

This is a tough one, but I think I need to go with a three here. The game’s lack of alternate solutions and the simplification of all of the areas keep it from rising any higher than that. My score: 3.

Azeroth’s game engine for Inspector Gadget is actually pretty nice with some roughness around the edges. The screen layout and basic icons are fine and easily understandable. Mouse-over text is also nice, although some objects only have mouse-over when you can interact with them with that verb. So, for example, if you mouse over a M.A.D. agent with the “talk” icon, you’ll know you can interact with him, but do the same with “use” and there is no way to tell. This is only confusing at times when you might need to use an unclear verb. One of the consistent hassles is that you sometimes use “go to” and sometimes “use” to travel between screens. An open door? Which icon gets me through it? I’ll just have to try both. You don’t notice after a while, but the actual area that Penny and Brain can walk on in each screen is very small, just a narrow strip at the bottom of each screen. The interface doesn’t appear to support very much depth, scaling the sprites, etc.

The pixel-hunting in this game isn’t too bad and most objects have large trigger areas but not all of them. The “finding a key in a drawer” puzzles are still very annoying, especially as they used that in multiple locations. There are also occasional bugs where the hotspots for an object are smaller or misplaced from where you think they are. My final complaint is about speed: the interface is extremely slow, at least in my emulator. Every action feels sluggish and having to re-do a section is excruciating. Overall a good but not perfect effort. My score: 4.

Let me start by saying that I do not remember that much of Inspector Gadget, the cartoon show, and I never got around to watching episodes prior to doing this review. (Sorry!) That means that I cannot say how much of the story they took directly from the show and how much is unique to the game. While I cannot say that the game has much (if any) character development, the overall story of M.A.D.’s desire to make money by not caring about environmental consequences is a good one. Other than the kidnapping plot, most of their industries weren’t even illegal: they made very inefficient toothpicks by chopping down the rainforests, they ran under-funded nuclear power stations and plastic-spewing fast-food restaurants, and even a factory that made umbrellas in a very polluting way. There’s a solid message here that you don’t need to look like a mustache-twirling villain to have negative impact on the environment, a message that holds up shockingly well today. The actual plot beats of Gadget losing his gadgets help to drive the episodic elements forward as well as establish why Penny and Brain are so important to the story. While it certainly is not Shakespeare, elements from the individual episodes (such as the mysterious robot factory we found in L.A.) come together at the end.

All of that said, the developers dropped the ball on the setting. We have a globe-trotting adventure, but most of the locations were not particularly educational or diversified. While Russia was done surprisingly well (including both the Moscow State Circus and referencing the Chernobyl disaster), many other areas failed to be distinctive. Hong Kong was nice (even more so once I realized that floating restaurants are a thing there), plus London at least cited the U.K. coal industry which I know was once of historical importance. (I learned that in an episode of Doctor Who!) Kenya, as I have complained about at length, was the worst offender although I still find the fake-Portuguese in Brazil to be upsetting. Overall, there is more good than bad here but I wish they would have just researched the locations a tiny bit more. My score: 6.

I am impressed by the graphics in this game. Not only have the cartoon-style animations and watercolor backgrounds aged well, the developers went all-out to animate many of Penny and Brain’s actions and Uncle Gadget’s gadgets. Sometimes that was done well and sometimes less well, but the level of detail in the animations reminded me a bit of Willy Beamish. (Now that I think about it, they both used a similar art style and level of humor that I liked.) There are a few instances of recycled locations, but nothing too major. All airports look the same anyway, right?

The background music was also fairly nice. Not fantastic, but there are unique background tracks which play over some of the areas. I ended up turning off the sound because of the way that I play, but whenever I had it on it was fine. There were also synthesized voices for Uncle Gadget whenever he used one of his gadgets and Dr. Claw got to intone his famous "I'll get your next time, Gadget!" at the close. My score: 6. 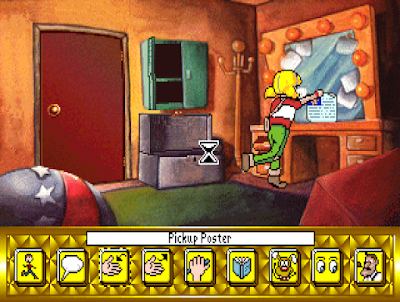 For all that I liked the overall story and the graphics, the “environment” is one of the ways that this game fell down for me: too many similar areas and puzzles over and over again. How is Penny going to be kidnapped this time? What costume will Brain conveniently find just where he needs it? What gadget that I conveniently find nearby will be the secret to rescuing the U.N. ambassador? None of that leads to a sense of immersion. That said, the humor was great and the art was often better than you would expect for a tie-in game. The game hung together well but I wasn’t “sucked in”. My score: 4.

Most of the writing in this game is good, but some of it is fantastic. There are deep-cut pop culture references and humor that work for kids as well as adults. This is a game that encouraged me to explore and talk to people even when I knew I didn’t have to, just to see if they threw in an obscure joke. Regretfully, the lack of things to interact with is a real fault as most scenes have been simplified to make it easy for kids to play the game. In terms of “Acting”, we have a few voice samples that appear to be from Don Adams himself, although he is uncredited. My score: 5.

Let’s add up the points and see what we get: (3+4+6+6+4+5)/.6 = 47 points! Although I liked the game at times and was bored at times, I do not see the need to add or remove any bonus points. In fact, that is a bit higher than I expected it to be, but as I look back over the scores now it all seems pretty fair. 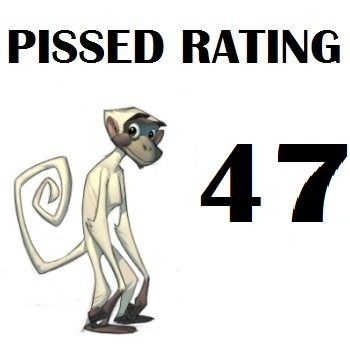 A score of 47 puts this game up there with Dr. Brain, the original King’s Quest, and Star Trek. That is some good company, although all of those games are flawed in some way as well. I honestly didn’t expect a tie-in children’s game to do this well and I suspect that you didn’t either because the average score guess was 39. (42 if you remove Niklas’s kinda-crazy guess of 9 points.) Still, I feel good about it.

Our winner this time around is Laukku who guessed 48 points. Congratulations!

That’s it for me for now. I’ll be resuming the Infocom marathon soon, starting with Hitchhiker’s Guide and a special surprise treat. I’m going to try to get that started immediately, but I have a family vacation coming up in July as well as a commitment to write a guest episode for a history podcast that I enjoy. My next mainline game will be in 15 (unless I get drafted for something else): Batman Returns. See you soon!

5 CAPs to Gren Drake
3 CAPs to Andy Panthro
3 CAPs to Torch
3 CAPs to ATMachine
3 CAPs to Voltgloss
2 CAPs to ShaddamIVth
Posted by Ilmari Jauhiainen at 23:00