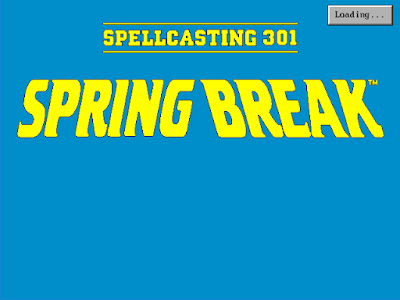 Hello folks, Voltgloss here, ready to start my first mainline Adventure Gamer playthrough after cutting my teeth on a couple of Missed Classics. And what better way to do so than tackle the final chapter in Steve Meretzky’s post-Infocom magnum opus, that I described to my wife as “Harry Potter meets Animal House”: Spellcasting 301 - Spring Break! Having been an avid player of all things Infocom back in the day, but having never experienced the Implementers’ post-Infocom works, I’m excited at this opportunity to continue the journey started by Aperama while he is off for paternity leave.

Comparing this game’s credits to those from the first two games, the one significant change I see is a bevy of additional “artmasters”: a total of 10, way up from the 4 of Spellcasting 201 and the 1 of Spellcasting 101. I expect this is due to the game’s being the first in the series to introduce VGA graphics. According to MobyGames I can also expect “continuous music tracks” and “slight changes to the interface.” Let’s plunge in and see what there is to see!


The game opens with a scantily-clad professor summarizing the events of the first two games, using the time-honored teaching aids of a slide projector and suggestive poses. Brought up to speed on Ernie Eaglebeak’s past exploits (which I won’t try to summarize here, instead recommending the reader check out Aperama’s excellent posts on the first two games), we are dropped on a beach at “Fort Naughtytail” with a one-spell spellbook (BLERK: create purple animals, which summons a hippopotamus to no apparent use) and no more instruction or goal other than to “enjoy our spring break!”

After a couple of turns, a beautiful woman strolls into view and makes eye contact. Greeting her causes her to suggest “going somewhere together,” whereupon our spell book mysteriously sprouts a new spell (WOO: spell of privacy). Trying the obvious WOO WOMAN causes a Teaching Assistant Nymph to appear and scold me for trying to cast an “objectless spell” onto a target. Okay, I’ll just cast WOO then, and we’re suddenly in a hotel room with prominent censoring. This is clearly the game’s way of teaching a new player about (i) spells and (ii) the game having a “nice” and “naughty” mode (with a joke about naughty mode having been cut by censors… and then turning on naughty mode only after the game asks “are they gone?”).

And then, after doing the obvious and leaping enthusiastically in bed with the lady, our ecstasy is shattered by the discovery that we are in fact dreaming. A dream from which we are rudely awoken by one of our fellow members of that illustrious fraternity, Hu Delta Phart. Hey, I’ll take this dream over being chased up a tree by a hellhound any day of the week.

After an instruction to meet downstairs so the frat bunch can leave for spring break, we’re left to our own devices in our dorm room. Starting inventory items include our spell book, eyeglasses (worn), an instruction sheet, a confirmation letter, a trophy, and a package of breadsticks. The spell book contains three spells: BIP (produce soft music), FOY (create daiquiris), and FRIMP (levitation) - the BLERK and WOO spells are gone, apparently having been dream-only. The instruction sheet and confirmation letter explain how to pilot a magic carpet to Fort Naughtytail and detailing our room assignments there… and reading them cause the game to direct me to my game package while mocking software pirates (i.e., these are the game’s copy protection). The trophy is an award for having completed Spellcasting 201. And the breadsticks are… apparently just breadsticks.

And as I’m poking around my room (with an option to listen through the ventilation duct to the frat pledgemaster - not our nemesis Chris Cowpatty from the last game, but rather his replacement - salivating over the prospect of girls at Fort Naughtytail), the frat president shows up to hand me a “control crystal” and demanding we get on downstairs to pilot the magic carpet we’re using to go on spring break. We can’t seem to explore much else around the fraternity other than going downstairs and outside to my impatient fellow students, so I head on out to launch our magic carpet. Next stop, Fort Naughtytail!

...Except I seem to have wasted too much time, for as soon as I step outside, the frat president takes the crystal complaining they can’t “wait forever,” hands it to another student, and off they launch, leaving me behind. Game over.

Flying the carpet is a matter of following a precise set of directions provided with the game materials. Deviating from that course leads to a swift death by sudden flock of hungry rabid demonbirds. Following that course takes us over Barmaid University, the Isle of Lost Soles in the ocean (remembered from a “freshman year” visit - i.e., the first game), and finally Point Blather, on which Fort Naughtytail awaits us. By the time we arrive our fratmates have all dozed off, leaving us to deal with a sudden problem… the carpet’s “magic gryoscopic flangelator systems” have failed, and our only choices to prevent a crash are to pull the Failsafe Lever or “offload excess weight!”

Of course there is no failsafe lever (that entire corner of the carpet is just missing), so I’ve no choice but to throw overboard a series of heavy objects on the carpet: the frat’s sack of gold, a portable bar, a mysterious closed trunk and closed case (neither of which I can open, as a fratmate suddenly wakes up only to stop me and then promptly goes back to sleep), and a beer keg. All that ballast divested, we spiral safely down to the plaza of Fort Naughtytail, where our adventure can begin in earnest!

...after being chewed out by our fratmates for losing all of our stuff. Hey, if it wasn’t for me we’d all be dead before the game even got started. Some friends we have!

A splash screen pops up welcoming us to “Chapter One,” so the prologue is officially over. Seems a good spot to stop this introductory post and give everyone an opportunity to guess how this game will do in the PISSED rankings and/or bet on any puzzles I won’t solve without assistance. I would also like opinions on playing Naughty vs. Nice mode. So far, I’m intrigued to see where this goes. Thanks all!

Note Regarding Spoilers and Companion Assist Points: There's a set of rules regarding spoilers and companion assist points. Please read it here before making any comments that could be considered a spoiler in any way. The short of it is that no CAPs will be given for hints or spoilers given in advance of me requiring one. As this is an introduction post, it's an opportunity for readers to bet 10 CAPs (only if they already have them) that I won't be able to solve a puzzle without putting in an official Request for Assistance: remember to use ROT13 or some other appropriate cipher for betting. If you get it right, you will be rewarded with 50 CAPs in return. It's also your chance to predict what the final rating will be for the game. Voters can predict whatever score they want, regardless of whether someone else has already chosen it. All correct (or nearest) votes will go into a draw.
Posted by Ilmari Jauhiainen at 23:00