Last time I had just got instructions to find six things for magician Al Kwasarmi:
The sinews of the bear I had already found at the very beginning of the game. Bird’s spittle was also quite easy. I just had to take the spittoon that the magician had given me to the only bird I had seen so far - the eagle on Shetland Islands. Breath of a fish needed some more work. I had to figure out that vikings probably didn’t know dolphins weren’t fishes, but then it was just the matter of finding the randomly moving mammal and collecting some of its breath to a flask given by Al Kwasarmi.

Sound of a cat moving was intriguing to collect. I did already have a cat, but how could I get it’s sound? I finally tried attaching the bell I had to the cat, which produced a sound that filled a jar I’d got from the magician (bear in mind that the game is based on a fairy tale). That only left woman’s beard and roots of a mountain on my list. Time to go exploring then!


It’s no wonder I hadn’t found this island in my first round of exploration, since Jan Mayen actually is far away from anything else. In the game, it should be a place occupied by a nameless old enchanter and his daughter, Freya, who happen to be characters from the book, where they help Erik, for instance, by equipping his men for the journey ahead. Here, I met only Freya, who told me that her father had left some stuff for me to get.

First, I had to solve a maze, which wasn’t too difficult to get through. When I checked the clue sheet afterwards, I noted that the colouring of the rooms was meant to be a message. In any red room, I had to take a left turn (you know, because politically left-wing parties, like Labour, use red as their symbol), in any blue room, I had to take a right turn (blue being the colour of right-wing Tories), and in every yellow room, I had to walk forward (yellow just happens to be the colour of British Liberals). I guess British political colours are a universal constant.

After this maze, I found a cupboard full of stuff left to me by the enchanter. Now, for the rest of the game, I really had no idea what to do with most of them, so after completing the game I finally just checked from the official clue sheet what they were supposed to do:
Hot rock (Iceland)

My journey to enchanter’s island had given me one clue - I should probably try to find Greenland. When doing some exploration, I instead got to Iceland, which was full of congealed lava and falling rocks. I had to wear a helmet to get through them safely and even then the rocks destroyed the road I had just taken. Luckily, I had that amulet I could use to return to Erik’s ship.

I found myself in a cave that led to the other side of the Earth - that is, to the land under the flat Earth, which Erik had tried to find in the book (and no, I haven’t mapped the game world completely, so I really don’t know whether it is also supposed to be flat, with a waterfall leading to the other side). I saw the green giants living in that land, but couldn’t really interact with them. Well, I could attack them, but that just took me to Valhalla. I did find out in the caves some sleeping female dwarves, from whom I could shave some Beard.

My next stop was Greenland, which was quite a small place, with just two rooms. The only remarkable thing was Stone Tree, which in the book could talk and lived in a valley where even rocks could speak. Here the tree was silent, but considering that so is pretty much everyone else, I could imagine that it actually said a lot of things. In any case, I found in the tree Stone Fruit, which I could take after shaking the tree and which was also described as a mountain seed. All I had to do then was to plant the seed and pour some mineral water on it - the nearest source was a pool in Scotland - and the seed grew into Mountain Roots.

I now finally had the six impossible things, which I then took to magician Al Kwasarmi, who made me an unbreakable ribbon out of them. Now the only question was what to do next.

Since I had already been to Iceland and Greenland, I suspected I should next try to find Vinland, that is, the part of North America discovered by Vikings. I did find some land in that general direction, but there’s no confirmation in the game or in the cluebook that this Farthest shore was meant to be Vinland. In any case, I found the dog-header warriors, again projecting fear on Erik and his men. I tried various solutions, but finally it was just a matter of carrying a mirror I had found at the island of evil enchantress - I guess it somehow reflected the fear produced by the warriors.

Finally, I found the prison, where the family of Erik was held, and I came face to face with a huge wolf Fenris. I knew I’d see the mythical beast! All I had to do now was to tie the ribbon to the wolf, open the door of the prison and find an invisible wall preventing me from getting in. You see, Fenris wasn’t the only obstacle, but I still had to solve a riddle written above the prison door:

The rich want me, the wise are sure of me, fools know me, heroes fear me, to enter you must own me.

Really, that easy? I had just a couple of weeks ago seen the exact same riddle in another Level 9 game, so I already knew the answer - nothing. All I then had to do was to drop everything and enter the prison.

Most of the puzzles fell a bit too much on the easy side, but I suspect that was the intention since the book was also meant for children. There weren’t that much of too difficult puzzles - using bent stick as a boomerang was probably the worst. Checking the clue sheet afterwards, I also noticed that there were couple of alternative solutions to puzzles, such as two ways to reach the land down under. Nothing revolutionary and far from satisfying, but at least the game’s puzzles were a bit better than in the few earlier Level 9 games.

I could probably just copy everything I said about the previous Level 9 games in this category. The producers are clearly using a standardised package for all their games at this point, with little innovation. You could say that moving sometimes the ship instead of Erik is a novelty, but that’s a bit of stretch.

The story of the game is nothing exceptional, and for the most part it is forgotten and replaced with mindless sea exploration and basic treasure hunt. While the story is pretty humdrum, setting is even weaker. I already complained in my last post that the game just ruins the fairy tale mood of the book by introducing Erik and his companions into the real world. This failing could have been corrected, if the game world had been interesting, but now even the center of Viking culture in England was empty and desolate like a quiet village on a Sunday morning.

Otherwise the graphics would be on par with the graphics in Return to Eden, but when most of the time I just saw the same image of Golden Dragon on sea, I have to take away one point.

The beginning of the game had potential, with a tangible mystery and a sense of dread, when Erik finds his farm empty of any living soul. Then the story sets on the ocean and all urgency vanishes. I am quite sorry for Erik’s relatives who probably had to wait in prison for years, when the head of their family sailed around the North Sea and Atlantic doing such great heroics like exporting mineral water from Scotland to Greenland. With so little content, the game world is way too huge, and attempt at a realistic map of the ocean just makes moving around very dull.

With Return to Eden I complained that there was hardly anything of note in text in addition to puns. Here, even the puns are missing. The best attempt at a characterisation were the occasional remarks on what Erik’s men are doing on the bridge (“Sven the Strong is shining his sword”), but since these are just words and gamewise the crew of Golden Dragon does nothing at all, this really deserves no extra points.

(3 + 3 + 2 + 2 + 2 + 2)/.6 = 23, which makes this the worst Level 9 game so far. I am quite satisfied with the score, since there’s less of everything in this game - well, except sea, there’s lot of that. That means that Alex Romanov had the nearest guess. We'll hand out the CAPs when the next main game has finished. For our next Missed Classic, it's time to let Joe Pranevich continue his Infocom marathon with Seastalker! 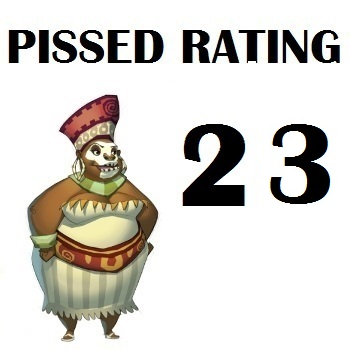 Email ThisBlogThis!Share to TwitterShare to FacebookShare to Pinterest
Labels: 1984, Final Rating, Ilmari, Missed Classic, The Saga of Erik the Viking