Indiana Jones Journal Entry #3: Sophia suggested we look for Atlantis together but I felt she'd just cramp my style. I'm using my own wits to find out if the place is real or the myth I've always thought.

Now that I've reached Atlantis on the TEAM path, it's time to backtrack and try to get here by WITS alone. So let's say goodbye to Sophia and use our wits in the fine city of Monte Carlo.

After finding Trottier walking the streets of Monte Carlo – I know which guy he is this time so I don't have to ask random strangers if they are him – he asks me a question to prove I've read the Lost Dialogue. I answer correctly and he tells me that he can't help me, but gives me his business card that I can use to convince others to help me.

Well, Monte Carlo was particularly easy, some might say pointless, on the WITS path, so I made my way to Algiers.


I must admit, at this point I wondered if perhaps the WITS path just removed puzzles from the game instead of adding new ones.

Ignoring that thought, I make my way to the artifact merchant, and Omar Al-Jabbar isn't there, but instead I meet his servant, Paul.


Paul needs a reason to allow me to see Mr. Al-Jabbar so I show him Trottier's business card. He leaves the shop and asks me to wait. I look at all the stuff in the shop for a while, then leave as Paul hadn't come back yet. I notice that I can 'Walk to City Streets' at the edge of the screen. When I attempted to do so on the TEAM path, Indy just says that he won't do it because he'll get lost. Now I can do it.


After randomly wandering the streets for a while I go back to the market, where I find a new guy standing around acting happy... or drunk...


I go back to the antiques store and Paul comes back and tells me Omar won't see me.

I leave the store and talk to the happy chap in the fez, who's still in town. He tells me there's a festival going on right now.


Fez-Man doesn't know where Al-Jabbar lives, but back in the Pac-Man streets I notice man in red fez is also walking the streets. This gives me an idea. If I can make Paul wear the red fez, I can follow him as the red fez sticks out amongst the crowd. I go back to the market when Fez-Man is there and talk to him again. This time I compliment him on his fez. If I choose the right dialogue options I get what I want. If I choose the wrong dialogue options the conversation ends and Fez-Man leaves. I can leave and come back constantly but I'm lazy so I save a game early in the conversation and keep trying until I he gives me the goods.


I can now go back to Paul and offer him my fez. (I know what you're thinking - I tried and Indy refuses to wear the fez.) When I point out to Paul that the fez will make him taller, he takes it.


Now, when I ask Paul to check again if Omar will see me, I can follow him because the red fez makes him stand out amongst all the white dots and if I'm close enough... 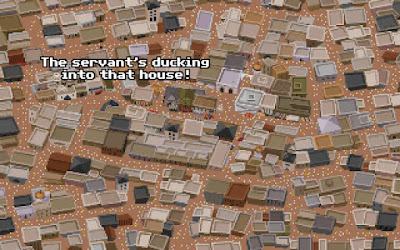 Entering the house, I'm greeted by Omar. He's not happy to see me.


Omar then sends Paul off to call the cops, leaving me to explore his house while we wait. Every time I try to take or use any items in his house Omar comes to me and objects. I quickly work out a plan. I touch something in his walk-in closet. He joins me and tells me to stop, then I leave the closet and lock him inside. He wishes various types of death on me as I ransack his house.


I take a bamboo stick, which I use to get some hanging cloth which turns out to be a map.


With Omar's map to the Atlantean dig site in my inventory, I steal Omar's camel. With the camel I explore the desert much like I'd previously done while on a balloon during my TEAM path play. This time there's an added obstacle in the form of people on camels that are labelled “TROUBLE” when I mouse-over them.


When I'm caught by one of these guys I'm just sent back to the city to start again. If I was unable to save during this section I'd quickly get frustrated and annoyed, but as I can save the game at will this isn't a serious problem.

Again, like when I explored the desert in a balloon, I stop off at nomad camps on the way, and they point me towards my destination using my map.


I get to the dig site, and once again find a broken truck. But this time the puzzle is different.


I solve some of the same puzzles as I solved on the TEAM path. To summarise...

But there are some differences: 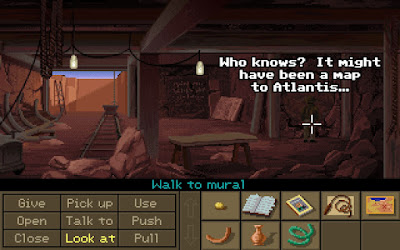 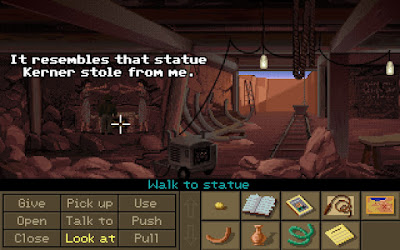 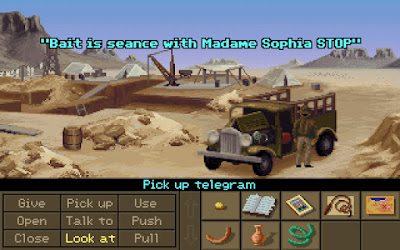 I hadn't found a battery for the truck, but I remember the cutscene with Kerner and Ubermann that Indy should have no knowledge of, so I know that the statue with an orichalcum bead makes a great power source.

In Monte Carlo, I speak to Trottier to try to warn him. He doesn't believe me, and he won't answer my other questions. I give him the telegram, and he still doesn't believe me, but while he's telling me off for wasting his time, a car double-parks and two guys in suits come towards us.


After considering letting the Nazis keep him, I get in a car. Not having time to worry that people in Monte Carlo leave their cars unlocked and with the keys in them for any stranger in a hat to steal, I follow the Nazis through the streets.


The Nazi car drives randomly through the streets, which go on for a few screens both horizontally and vertically. After chasing the Nazis for a while, I manage to cut them off by taking a shortcut and crashing into them. Trottier had been thrown out of the car, and the Nazis use the flimsiest of excuses to leave the guy they went to a lot of effort to kidnap. 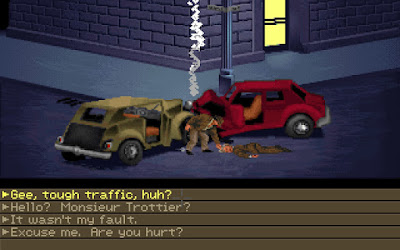 Trottier quickly gets up after I rouse him, and now that I've seriously injured him he's willing to help me. He offers me his Sunstone as well as some information.


Trottier is convinced that Thera is the Atlantean Lesser Colony. So I'm on the way as soon as he gives me the Sunstone.


He tells me where he threw the Sunstone away. It was near the corner of Boulevard des Guerres des Etoiles and Rue Truffaut.

The next step is simple trial and error. I walk around Monte Carlo using the same top-down interface as the driving sequence. Stopping at a corner brings me to a closeup similar to the car crash screen above and I can read the street sign if it has one.


My strategy for this sequence was pretty simple. Keep checking corners vertically until one of the streets is the one I'm after, then do the same thing horizontally.

At this point I thought that perhaps I was wrong about the WITS path just removing puzzles, and perhaps adding simple trial-and-error sequences was its definition of using WITS.

After 9 minutes of trial-and-erroring I found the right street, and opened a drain to get the Sunstone.


And now, it's off to our next location:

And we'll leave it there for today. Next time we'll visit Thera and perhaps somewhere else as well.