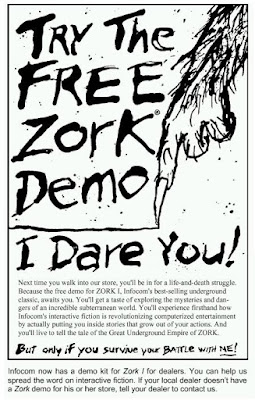 You might say that a guy who is trying to play every Infocom game in release order, plus read all of the tie-in books, is a bit of a completionist. If you then added that he was trying to do all this in a mad rush because he wants to be done before it’s time to review Return to Zork when we get to 1993, it’s probably best that I don’t know your opinion. If you asked my wife, she’s tell you that I like to do things in the correct order. I always try to read books in the order they were published, regardless of what the author says. I’ll probably never let my son watch the Star Wars prequels before the original films. The shared experience is important to me and my playing these games in order, I have a hope of understanding how the original players felt when these games came out, even if the average Infocom-purchaser wouldn’t have bought all of the games.

That leads me to this surprise. I had thought that Cutthroats was the next released game, and I’ve started playing it already, but while I was wrapping up the research I learned that I had been mistaken: there was one tiny Infocom release between Seastalker and Cutthroats. Around the summer of 1984, Infocom released two special advertising packages. The first of these, the so-called “Zork I demo” was a disk sent to computer stores. The intention, at least according to text in the demo itself, was that a customer in these fine establishments could sit at a computer terminal and play a few minutes of an Infocom game, become inspired, and leave with a handful. But while Zork I is a lot of fun, it wasn’t quite the perfect game to get players hooked. It didn’t hold players’ hands at all or even explain how you play interactive fiction. To remedy this, Infocom developed the Tutorial Game, a miniature adventure that would introduce the key concepts in a fun and lighthearted way.


This game will look different than the other Infocom titles that I have played. Except for the original Dungeon, I have been playing the DOS versions of the games as they appeared in the Lost Treasures of Infocom boxed sets. This is both to provide some consistency, as well to as guarantee that any bugs that I discover are in the originals. While I have searched for a DOS version of the “Zork I demo”, none seem to have survived to the present day. I considered playing this in an Apple II emulator, but that seems like much even for me. Instead, I’m just playing the original data file in Frotz instead, an open source Infocom interpreter. This is essentially like playing in an Infocom version of ScummVM, but it’s the easiest way for me to play and grab pictures for this mini-review.

When you boot the demo disk, it drops you into the Tutorial Game after a few introductory words. Although there are no credits provided on the splash screen, this game is believed to have been written by Marc Blank himself, the co-designer of all three Zork games, Enchanter, Deadline, and The Witness. The game opens into a bare living room with two exits and a brass lantern sitting on a table. We’re told right away that the goal of the game is to capture a prized butterfly which is flying around in the room to the south. We are joined by a narrator who is prompting me on the basics of adventure gaming, suggesting that we type “look” to look around and “inventory” to see what we are carrying. It then suggests that I walk east, straight into a darkened room. I might get eaten by a grue!

The narrator interjects frequently with more than a little bit of humor:

This illustrates two important points. First, don't believe everything a computer tells you. Second, objects lying around like tools, lights, and weapons can be useful and should probably be carried around for situations like this. Luckily, we have seen a lantern in the living room. As the man said, "Go west!"


Don’t believe everything a computer tells you? If we all listened to that advice, what would we use Twitter and Facebook for? Once I get to the west, the narrator backs off and tells me that I am on my own. I try to read the sign, but the game helpfully suggests that I should be more concerned with the lamp right now. I grab and light it before returning to the previous room, now described as a broom closet. Inside is a net and a key so naturally I pocket both. The game practically gives me a high-five.

Now it lets me read the sign! It reads, “Butterflies are free. Bring your net.” The southern door is closed and locked, but I can use my new key easily enough. The game uses this as a chance to show you that you can (and sometimes must) use adjectives, in this case to distinguish between the southern mahogany door and the eastern oak one. The narrator says that this is a feature of all “Interlogic” games and that is a term I have not heard in awhile. It’s possible that this game existing for some time before sending it out on as a demo. Is this the last time Infocom uses that term?

I enter the final room. The narrator tells me that catching the butterfly “will enhance your reputation as the world's foremost collector of rare butterflies and enable you to finish this tutorial before the store owner throws you out.” That is hitting a bit close to home, don’t you think? I look around, but I didn’t move fast enough because the butterfly escaped out the now-opened door. I lose and the demo transitions to a brief excerpt from The Witness before dropping me to the start of Zork I. Not taking a loss for an answer, I restart and play the rooms quickly again, this time shutting the mahogany door as soon as I arrive. Trapped inside with a madman with a net, I capture the butterfly easily and win.

Once again, I get to see a single room transcription of The Witness before being put into the beginning of Zork I. Did they really expect people to play that game on the basis of a single room description? I play a bit of Zork and the outside area seems to be intact and I can even retrieve the painting from the basement. As soon as we defeat the troll, the game ends. Alas, I will have no trip to Flood Control Dam #3 this week.


I’m going to leave it up to Ilmari to determine if this game is “real” enough to be given a rating, but I can hardly help myself to think about it. Scoring it quickly, I would give it a 1 for Puzzles and Solvability, because there is a bit of a puzzle there and the game doesn’t hold your hand the whole way. The interface is the typical Infocom parser, but nicely improved with the narrator interjecting in a way that seemed both natural and helpful. I’ll use the typical 4 for Interface and Inventory. Given the lack of story, I’d do zeroes for Story and Setting, Sound and Graphics, and Environment and Atmosphere. That leaves 3 points for Dialog and Acting because the narrator is a nice touch; the whole effect is surprisingly well-done. 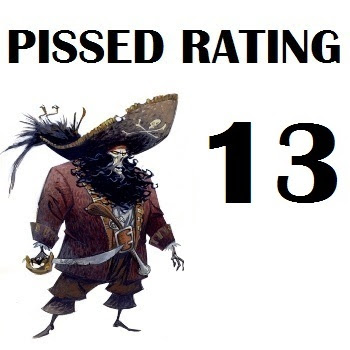 Although this Zork I version was released only to retailers, the tutorial game was also included in the Four-In-One Infocom Sampler release later that year. There seems to be several versions of that sampler floating around (the one I located must have come later since they mention Wishbringer), but all of them include the tutorial game. Later sampler disks would include a different set of games and not all of them included this tutorial. 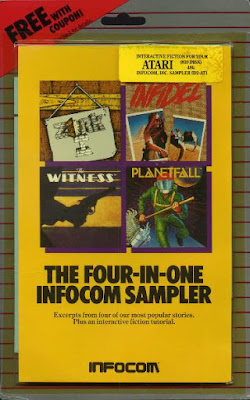 This will not be our only “demo” game in the Infocom marathon, but the next one is not likely to come for a while. In 1987, there is supposedly a specialized “demo” version of Wishbringer that I can look at and see if it deserves its own post, but more important is the 1990 release of Mini-Zork, a Commodore 64-exclusive version of Zork I released as a magazine sampler. That game actually has some modified puzzles from the original and I am looking forward to seeing what that looks like… in a few years.
Up next really will be Cutthroats. I promise.
Posted by Ilmari Jauhiainen at 23:00