Indiana Jones and the Fate of Atlantis - Comb Sweet Comb

Indiana Jones Journal Entry #4: I've dealt with a bureaucratic official who's a stickler for the rules unless I give him a priceless artifact and had to deal with a Nazi guard who won't leave his post unless I make MYSELF a sandwich?!? I also spent time in a labyrinth regularly rubbing a scarf on a comb. It's been a weird day.

We left off last time with Indy on his way to Thera due to information we gathered from the likely concussed Monsieur Trottier. So let's continue our WITS path journey to Atlantis.


The official tells me he'll only let me take the basket if I give him a souvenir from the archaeological expedition in the mountains.


I go back and offer everything I have to the port authority official. He won't take anything I have.


I go back to the mountains and pixel hunt more thoroughly. Apart from the 'cleft in mountain; I also find a 'gap in mountain' and 'notch in mountain'.

I can go to the 'notch in mountain' which is where I find the archaeological dig.


Inside the dig site, I pick up an entrenching tool.


Suddenly, my screen shakes and Indy surmises that 'something must have caved in'


Ignoring the cave-in for now, I go back inside and close an open bronze door, which opens a panel with a peg in it. I use my Sunstone on it and put the 'setting sun' under the 'tall horns', hear a 'klik' (grrr!) and open the door again to reveal a carved sign.


I take the sign, and my Sunstone, and go back to use my entrenching tool on the cave-in.


Because the game's being a stickler for making me go through the obvious step, I open the tool. When I do, I discover a note that was hidden in the tool. 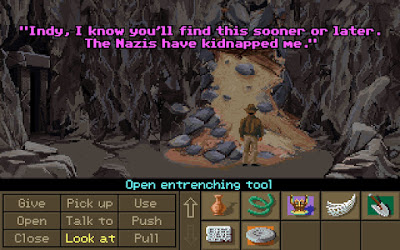 Sophia's been kidnapped! I use my open entrenching tool on the cave-in and get a cutscene for my trouble.


I go back to the dock and offer the port authority my new carved sign. He lets me take the basket, and also translates the sign, which is in Minoan Hieroglyphics.


I still need an invoice for the balloon bladder, so I go back to the dig site and check out the empty open crate. Sensing a puzzle solution I've come across in a few games, and even done earlier in this exact post, I 'close' the open box.


I go back and show the invoice to the port authority who now lets me take the balloon. I use the balloon with my fish net, which holds the balloon in place. Then I attach it to the basket. I also use my rubber hose with the balloon so now all it needs is gas for inflation. There was a hole near the dig site that was venting natural gas, so I go there.

I randomly fly over the ocean, landing on a few islands that don't contain anything useful. I have no idea where I'm supposed to be going but find what I need soon enough. 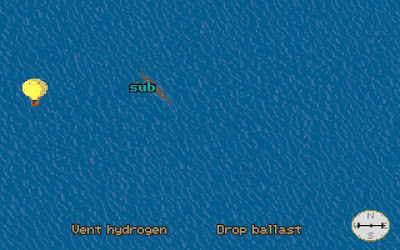 I beat up the captain, take his clothes and enter the submarine cunningly disguised as a German U-boat captain. Inside the sub, I take a clothesline.


I find a soldier that's guarding a locker. He's upset because Kerner's got him guarding a rock. He hints that he could use a lunch break. Remembering what I did in my TEAM playthrough, I suspect he could do with a sandwich so I make one in the galley. Before going back to the guard, I explore the rest of the sub. The guard near the torpedo worries about the exposed wires causing a fire which gives me something else to think about.


I go back to the guard and offer him my sandwich.


He won't take my freshly made sandwich because he's too polite, but I suggest he make his own while I cover for him instead. He agrees and takes off. I open the locker he'd been guarding and take the Moonstone and a 'Torpedo Launch Instructions' pamphlet.

After I leave the area Indy notices that the sub's changing course.

Ubermann and Kerner are upset.


I try to leave the sub, but a guard stops me. He tells me that he's under orders to shoot any naval personnel who leave the sub.

This was the point I guessed I could die, based on Alex Romanov telling me in the comments of the previous post that there's one way to die in the WITS path. I kept attempting to leave the sub, but when the guard stopped me Indy just went back down again.

Oh well, I go back to the sub, and search more thoroughly.


This was another section where I thought I might be able to get Indy killed, but alas, I was unable to make Indy burn to death or get caught by the sailors by going back while they're putting out the fire.

I go to the torpedo tube at the other end of the sub, use my stolen instructions to work out the controls, tie my clothesline to the lever, get into the tube... go to the head to change back into IndyWear (TM)... get back into the tube and pull the clothesline.


The torpedo bay shoots me just a few metres in front of the sub, so I go up and enter the ruins of Knossos.


I like that, so far, the different paths have the same consistent details. For example, the Moonstone is still in the Knossos ruins in Crete, but Kerner and Ubermann have found it first to replace the one they also found first on Thera. I assume that the Thera Moonstone is also how they followed me into the ruins of Crete in the TEAM path. Also, when I found the sub it was randomly moving around on a screen that turned out to be the approximate location of Atlantis - so it looks like they were searching for it before I stole their Moonstone.

With nothing to do in the ruins here, I go right and as I'd done on my TEAM playthrough, use my stones to enter the secret door into the Knossos labyrinth, and do many of the same things...

Apart from the staff and Worldstone Sternhart had, this time he also has a wool scarf and rubber comb. I take them both. His note also has something extra to say... 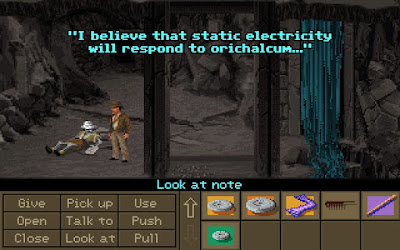 Hm. Well, I think anyone who's been to high school or rubbed their feet on a carpet to 'shock' family and friends knows that wool can create static electricity. I rub my wool on the rubber comb, which creates a 'charged' comb. I use the comb on my clothesline and use it to see if it works like the amber fish on a string I used when I played as a TEAM.


The big difference between this orichalcum detector and the amber fish is that this one discharges after each use so I have to rub it with the wool each time I want to try it out. Once again Lucasarts equates using my WITS to pointless busywork.

While in the gate room, I try to reach the hole, for the first time regretting not bringing Sophia. 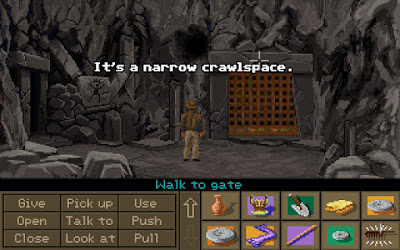 I once again use Sternhart's staff to loosen the chock and raise the elevator so I can take the gold box and orichalcum beads.

In the room beyond the gold box, I find something new.


There's a part missing, so I use the same part I used in the truck earlier – my little statue!


I use my stones in the map room, which opens a different door to last time. The map room stone puzzle just takes me back outside in the TEAM path, but here the door takes me to more of the labyrinth.

I find two more orichalcum beads inside some old bones, which makes me wonder if I've perhaps missed something in bones elsewhere. I've looked at most of the bones but as until now every one I've looked at has just told me it's the remains of some poor adventurer, I may have ignored some of them. Oh well, I can't be dead-ended in this game so it's nothing to worry about.

I also rub wool on my comb-on-a-string and find a secret door.

Inside the secret door is another new room. This room contains an orichalcum bead (taken) and a tram-type-contraption. I put the bead in the 'mouth' of the tram and get in. 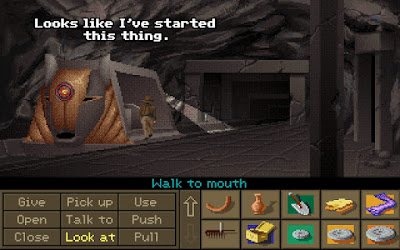 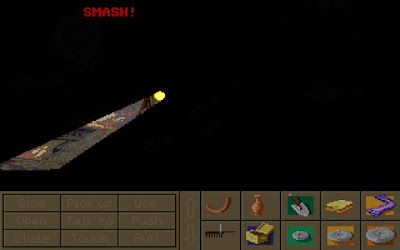 After crashing, the tram's light goes out. It's pitch black, but on walking to the left I find I'm in the same place I ended up on the TEAM path.


And now we've reached Atlantis in the WITS path. Next time we'll start the FISTS path. I was planning to detail the game's music at the end of this post but once again ran out of time (or more accurately left it to the last minute for no sensible reason.)

I'm still loving this game. I've already played a lot of the FISTS section and am currently stuck, though I expect to get out of it by myself. I'm also really appreciating the multiple paths. I rightly praised Quest for Glory for giving multiple puzzle solutions but this game is giving complete new locations, as well as multiple solutions (many of which I didn't find myself but I've been told about in the comments.) Good work, game!