Last time I had just managed to become the mayor of Enoch, the city built by robots on Eden. With nothing else to do, I boarded a train and traveled to the next station - the spaceport.

Apparently I required no tickets and not even checking-in or anything, because I could just walk to the space bus that would take me to the space base circling Eden. When I arrived to my destination, I was instantly captured by robots. They were convinced that Snowball was an alien spacecraft and were going to wipe it out of existence. I was suspected to be a spy and I was therefore locked in a habiviron. It was my duty to warn Snowball.

My robotic prisoners were really sloppy, since they didn’t check my inventory. Thus, I still had my screwfinger - finger-sized screwdriver - and I tried to use it to open a ventilation grill in shower room. Unfortunately, I couldn’t reach the grill.

Looking carefully at the description of the shower room, I noticed that a) the shower was on and b) water was draining through grid. Was I supposed to block the drain and fill the room with water, hoping it would raise me high enough to get to the grill? Well, it was worth a try anyway. I got a plate from an automat in my living quarters and dropped it in the shower. Yes, it worked.

I found my way into the air vents and then to the corridors of the space station. I was soon spotted by the robots, who started to chase me. After few failed attempts, I managed to find a cupboard where I could hide. Within the cupboard, I also find a space suit, which I naturally put on. With no robots to bother me, I could map the rest of the station. In an airlock, I found a starbike.

I rode the bike to Snowball, where I was instantly attacked by the crewmembers. It was another chase sequence then. Snowball had less rooms than in the previous game and I quickly found my way to the control room, where I was executed with handguns.

What had I done wrong? Looking at the clue sheet, way back in the space bus I had not found the cargo hold, where I would have discovered a radcom (some sort of communication device). With that in hand, I replayed the ending sequence. Now, the crewmembers of the Snowball did not shoot me, but instead took my radcom and used it to contact Eden. Why they didn’t shoot me afterwards, wasn’t explained, but I am just happy I wasn’t killed. Instead, a trial was held and I was acclaimed a Mega-Hero and confirmed as Mayor of all Eden by popular demand. Just because I had a radio with me? Oh well, I guess I shouldn’t complain.

Level 9 just doesn’t appear to have learned anything, as attested by the copious number of times I had to resort to the official clue sheet. It’s not that the puzzles weren’t innovative. Take for instance the puzzle with two platforms, where you have to put enough items on one to cover for your own weight on the other platform. Great idea, but the whole thing is so insufficiently clued that you don’t have any idea what you are supposed to do with the contraption.

I look in envy when Joe Pranevich gets to play with the fine-grained parser of Infocom and I am stuck with using two words for everything. It’s not like it’s a bad parser for its kind, but it still has obvious limitations. As for the inventory, it has become a norm in Level 9 games that you begin with quite restricted inventory limit, but then you find some contraption that allows you to enlarge it (here, a plant increasing your strength). I hope that Level 9 will one day just ignore this type of puzzle.

I would have wished that the game story would have been as strong as in Snowball. The game did have a promising beginning, with protagonist stranded on Eden and having to take part in the battle of living nature against mechanical robots. But once I had entered the city, that part of the plot was just forgotten and I had to deal with a silly piece about becoming a mayor - I guess it was meant as an optional side quest, since it played no part later. The final ending seemed rushed and the resolution was far from satisfying.

Finally, I can give an official non-zero score in this category for a Level 9 game! The graphics were definitely better than in the Spectrum versions of Level 9 games, but they were not as good as in Lords of Time, which is just to be expected, since that graphical version was published after this game. Then again, Return to Eden had more pictures, with some nice variation.

Just like with story category, the pieces of this jigsaw just don’t fit together. The game just couldn’t decide whether it wanted to be an action packed scifi thriller or a poor man’s version of Spaceballs. All the bad puns and references to classic works of scifi and fantasy were also a bit too much to stomach.

Dialogue and Acting
I just mentioned my increasing dislike of all the puns, and text of the game really hasn’t that much beyond it. The game does have lot of characters - at least if you count robots as characters - but there really aren’t any personalities that would say anything interesting. The previous Level 9 games have at least had occasional awe-inspiring descriptions of the environment, but I guess the developers thought that by introducing graphics they made them unnecessary. 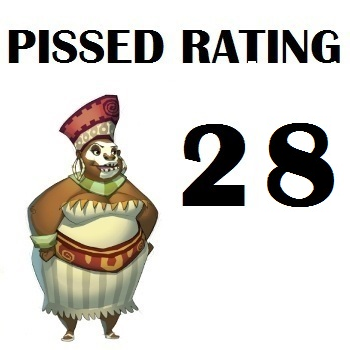 The game has third best score of Level 9 games, but considering that it got graphics unlike the previous games, it really sucked in all other areas. I am definitely getting the vibe that the developers would have been better off if they had for once emphasised quality over quantity. Well, the next game of Level 9 should be based on a book written by Terry Jones of Monty Python fame, so they better not screw it up.
Posted by Ilmari Jauhiainen at 23:00