It's time for our annual change of the year game, played through the final week of 2017 until New Year. This time, I shall take a look at Return to Eden, a sequel to Snowball by British text adventure company Level 9. Since Snowball has been the most intriguing game of the company, I have high expectations of this one. Sure, the previous Level 9 game I played, Lords of Time, wasn’t really my cup of tea, but I’m blaming the rookie game developer. Now, the Austin brothers, who founded Level 9, are back in charge and hopefully will beat their previous high score of 31.

The story continues immediately from the end of Snowball. As you might recall, that game told a tale of an EEC sleeper ship Snowball, so named because it was essentially built into a huge ball of ice. The ship was meant to fly to binary star system Eridani A and especially its planet Eden. One of the few humans awake on Snowball had some kind of nervous breakdown, killed her colleagues and directed the ship toward one of the suns of Eden. Fortunately, the ship awakened a special operative, Kim Kimberely, who killed the saboteur and changed the course of the ship back to Eden.

Eventually the rest of the frozen crew woke up and started to wonder what on Eridani had happened. The video records appeared to show Kim throwing a bomb to the control room. Verdict: guilty. Punishment: getting thrown out of airlock. Kim didn’t just want to accept her death penalty, so she escaped with a lifeboat and landed on Eden. This is where the game begins.

The manual of the game goes a little bit farther in describing the setting or the planet Eden. Before the sleeper ship, EEC (former name of Europan Union) had sent to Eden robot-manned ships, which have been busy mining the Eridani system and building new starships meant for the future generations of humans in Eden. On Eden, the robots had built a city called Enoch, meant for the upcoming settlers. Surprisingly, the indigenous flora and fauna of Eden didn’t like the intruders and became hostile. The robots couldn’t just pulverize the planet with nuclear weapons and poison gas, because that would have the world uninhabitable for humans. Instead, they built a wall around Enoch, which meant a sort of stalemate in the war between nature and technology.

All of this sounds quite intriguing, let’s see what the game is like! Note that Return to Eden is the first Level 9 game, in which the original version of the game already had graphics. This means that I’ll be discarding the text-only versions I used to play with a BBC emulator and only use a C64 emulator. 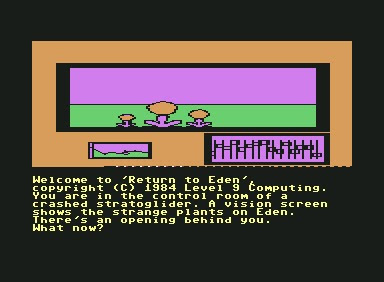 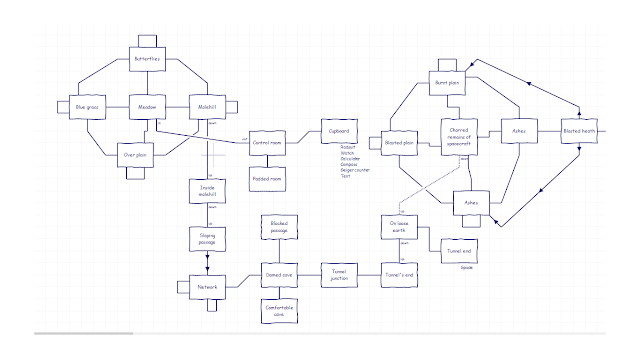 The game begun, when I had just crashed my stratoglider on the surface of Eden. After couple of turns, I heard something.

Kim Kimberley, you are guilty of murder. Your sentence will now be carried out. Prepare to die.

After some more turns, Snowball fired its engines toward me and I died. Now that’s how you begin a game!

I restarted and began mapping the immediate surroundings. My stratoglider consisted of three screens, one of them being a cupboard with a load of items: radsuit, watch, calculator, compass, geiger counter and tent. Unfortunately there was an inevitable inventory limit. Since Snowball was probably hitting me with atomic weapons, the radsuit and geiger counter were an obvious choice. Compass seemed also nice, because it showed all the exits in a room (don’t ask me how it does that). I supposed I just had to come back for the other items later.

Outside the glider I found a meadow, surrounded in cardinal directions by four rooms with extreme exits circling back to the room. That is, if in a room south to the meadow I moved south, I returned back to the room south to the meadow. This is common trick in early text adventures by which the game world seems larger than it really is and which Level 9 has used often.

I got killed a lot, I restarted a lot. Finally, I noticed that a room with a molehill is described as having very soft ground. That’s often a sign you can dig, so I tried to do that and uncovered a passage leading underground. 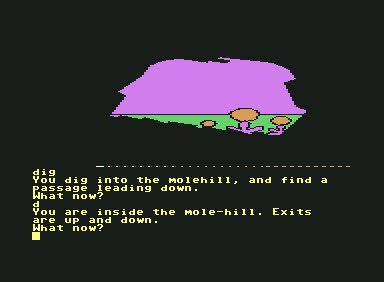 Going underground wasn’t protection enough, since the blast waves of the bombing covered me with sand. After another round of mapping I found a comfortable cave where I started to yawn and finally fell asleep.

While the cave protected me, the blast had completely destroyed the exit through which I had come. I tested if I could haul back all the inventory items to safety, before the eventual bombing, but to no avail. Either I had just missed an obvious solution to a puzzle or then the tent and other stuff had been just red herrings.

I started mapping and now found a spade (no idea what it was doing beneath the surface of an alien planet) and another exit that just needed some digging. When I tried to go up, my geiger counter emitted a warning sound and I had to decide whether to wait before ascending.

The new exit took me back to the surface. In terms of game plot, it was supposed to be the same place where I had been before, but now just a bit more charred. In terms of programming, though, I was facing new rooms.

Although the map was otherwise identical to the map of the same place before bombing, instead of molehill I found a blasted heath, in which I could move east towards a forest, where ferocious flora and fauna had been rumored to exist.

This is a great place to stop playing. So far, I’ve been pretty satisfied with the literally exploding beginning. I hope that the producers manage to keep the same drive in the later parts of the game. Meanwhile, don’t forget to guess the score for the game. To aid you in choosing the score, check out the scores of previous Level 9 games in the guide below.

Games already played on The Adventure Gamer:
Games still to be played:
Compiled trilogies:
Posted by Ilmari Jauhiainen at 11:00