Missed Classic: Return to Eden - I Don’t Know How To Do It, But It’s Got To Be Done

In my previous post I had just started Return to Eden with a bang. Kim Kimberley’s stratoglider had crashed on Eden and the sleeper ship Snowball nuked the remnants, because the crew thought wrongly that Kim was a terrorist trying to destroy the ship. Kim managed to survive by burying herself underground. My aim now was to survive the deadly forests of Eden and get to the safety of the robot-made city Enoch.

My first task was to map my new surroundings. There were few random encounters. On occasion, helicopter gunship flew over me, but it didn’t do anything. I also met some little animals - at least a squirrel and a rat - which attacked me, but couldn’t get through my radsuit. I decided to see whether they would kill me without the suit. They didn’t. In fact, they were completely uninterested of me, when I was completely naked. The fauna of the planet were supposed to be hostile, but perhaps they didn’t recognise me as a threat without any technology on me. Another encounter was a huge parrot that came after a certain number of turns and stole some of my inventory.

My whereabouts were surrounded on east side by a huge cliff. I tried climbing down, but that led only to my demise. Well, actually I was resurrected.

The northern side was limited by a river, which I couldn’t cross by swimming.

Beside the random encounters, there was plenty to wonder in the local flora and fauna:


Brick egg was starting to sprout, so I planted it and it sprouted into a small house plant. Inside the house I found some fish fungus. Now who could want some fish tasting fungus? Leviathan, of course! The old monster went away with a full tummy and I could finally cross the river.

For some reason, when I had reached the other side, my hair started to fall and after a short while I died from radiation sickness. Fortunately, I quickly found a pill-fir with a pill meant just for this. I also found some foxgloves, which you can apparently wear like proper gloves.

The main attraction of the other side was a maze made out of maize. It wasn’t that difficult to map, but it still felt like a pointless way to lengthen the time. At the center of it I found the parrot’s nest and the stuff it had taken from me.

At that point I was stuck. I had still plants I did not know how to use, but that didn’t take me far. It was time to check the official clue sheet. 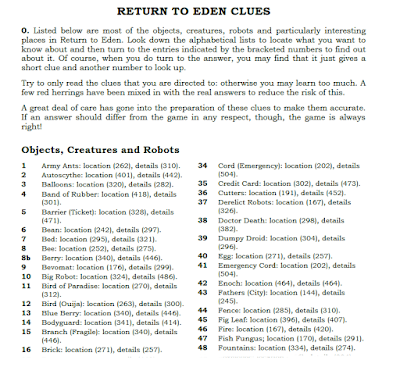 I haven’t really explained what the Level 9 clue sheets are like. As you can see, it’s full of numbers. First, the sheet contains in a numbered order most of the objects and the locations in the game. Every object and location in the sheet refers to two numbered answers - where to find it and what to do with/in it. Then we have few general numbered questions, like ”how to beat the game”. Finally, we have the answers in a numbered order. Thus, if you wanted to check what to do, say, on the river, you’d search for river on the list of locations, check out what number it has for the use of river and search for that number on the list of answers.

When looking at the clue sheet, I usually have some definite puzzle to consider, so I look at the location of the puzzle. In this case, I didn’t have any particular puzzle to wonder, just a general confusion what to do now. Thus, I started peeking on the items I still had found no use of. The answer was the dry bulb. I should have watered it by squeezing the moist log - something I would have never considered doing.

When the dry bulb was moistened, it grew into a shoot with umbrella-like projections. It was quite evident what should I do. I picked up the para-shoot and jumped off from the cliff, landing safely to jungle below. 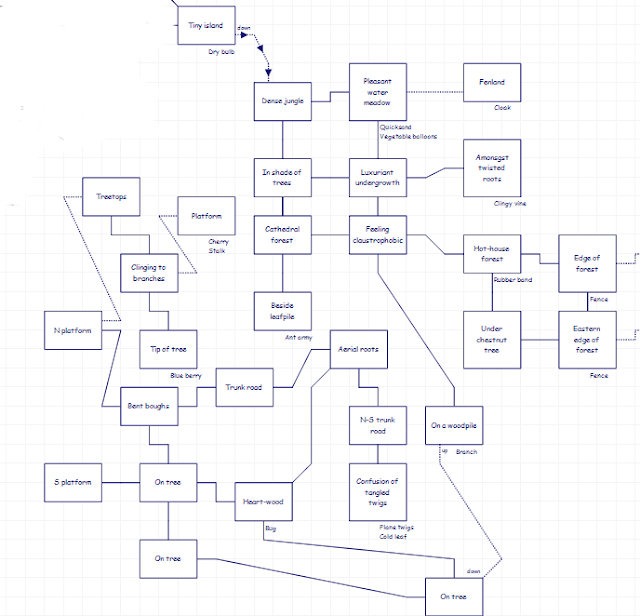 I could not climb back up. Still, the previous area wasn’t completely closed off. I found some vegetable balloons, which I could grab to float back to the cliff. This is a good indication how Level 9 has usually provided the player a possibility to return and retrieve items from earlier parts of the game.

Interestingly, while the helicopter gunships had fluttered above me quite harmlessly when I was above, now they appeared to kill me often, if I didn’t HIDE myself when I heard them. I don’t know whether this has been just random or whether the ships truly are more vigilant, when I get nearer to Enoch. Why are robots trying to kill me, you ask? There’s no indication in the game itself, but the manual suggests that the robots considered the first attack of Snowball on me as a hostile aggression of an alien spaceship, which has made them even more paranoid than usual.

Although the robots were trying to stop me, I had to get to Enoch, through all the defences. I could already see the first line of defence - a big fence on the eastern side of the jungle. Fence wasn’t the only limit of the new area. I also found some quicksand that prevented me moving forward at the northern side of jungle.

Again, I found some more or less interesting things:
Again I had stumbled on point, where I just had no idea what to do. I knew I had to cross the fence, but I had no idea how to do it. Consulting the clue sheet again, I found a suggestion how to go forward. Apparently the two platforms, supported by vines over a pulley, were connected. If I pulled a lever, the lighter platform would go up and the heavier one down. I might have figured that out, but the problem hadn’t completely disappeared. I had to figure out how much weight I had. Luckily the clue sheet told me that I weighed the same as five ordinary objects. I am really perplexed how the producers thought the player would find that out, since I can’t imagine many players making studious tests by carrying different amounts of stuff to a platform.

After loading one platform with enough objects, I went to the other platform and rose to the top of the tree. At first I found a blueberry which the game described was more like a glue berry. The glue of the berry was amazingly good enough to fix a broken branch. Behind this branch I found a fruit, which was as big as a green pineapple, and a stalk, which was shaped like a drum.

I quickly noticed that it was possible to play the stalk/drum with the twigs I had found. The only persons who might be interested of this kind of entertainment were the ants. When they had heard some marching music, they kept following me. I thought I’d lead them to the fence, and that army of small insects marched over the fence and broke it.

Since I’ve now crossed the fence and left jungle, I think this is a good spot to stop for now. A certain theme is starting to emerge, namely, the battle between organic jungle and mechanical robots, and it will be interesting to see where the plot is heading. The puzzles have a bit too much relied on silly puns. Some problems have not had adequate hints as to what to do. I just hope that the game will improve this aspect in later parts.
Posted by Ilmari Jauhiainen at 23:00