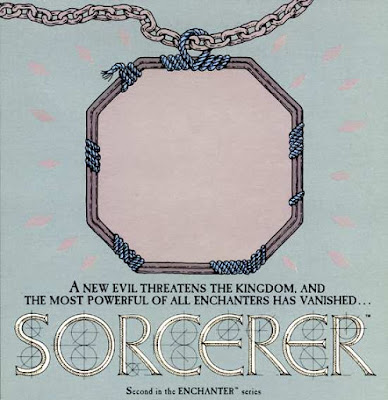 Infocom’s 1984 started off with a bang: Sorcerer, the fifth canonical Zork title and the second in the Enchanter trilogy, was the first game of the year. This is also the first Zork title not to be written by Lebling and Blank. Instead, it is helmed by the mastermind behind the Planetfall game as well as the Zork gamebooks that we looked at recently, Steve Meretzky. He is my favorite “implementor” of the gang so far and I am looking forward to playing this game immensely. I hope he sticks the landing after the disappointment that was Mike Berlyn’s Infidel.

But that does raise a question: why was Sorcerer released so soon after Enchanter? Each of the Zork games to this point had a fall release (November for the first two, then September). By releasing Sorcerer in March, that left only a five-month gap between releases. Was it intended to capitalize on the marketing of the Zork books? If so, why was the fourth and final gamebook released in the “usual” timeslot in October? It’s almost as if the fourth book was timed to be released when Sorcerer would have come out… If there is a story here, I do not know it and I welcome anyone that can shed some light on the subject. Whatever the reason, Spellbreaker took the usual fall release spot and players had a 17-month delay after this game before the finale.

The first sign I see that Mr. Meretzky is in charge of this game comes immediately after opening the manual: the new game is not shy at all to be connected to the previous Zork titles. I’m excited!


I mentioned this in the post on the gamebooks, but Sorcerer has the setting that I “expect” from a Zork game. This series always struck me as being nearly-modern with fantasy elements grafted on, sort of like Fallout’s 1950s charm but with a lot less dark humor. So having a good portion of the manual take place in the guise of a Popular Enchanting magazine feels exactly right. The various articles in the magazine provide some humor and essential backstory: 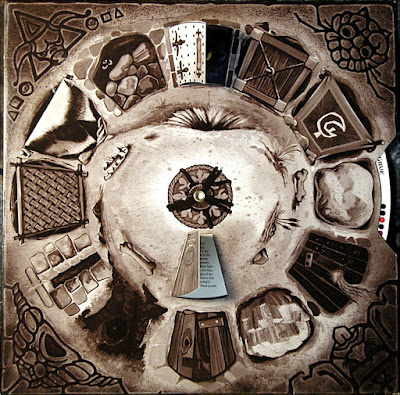 This is a great manual although it would have been lovely to have continued the brilliant typography from the Enchanter manual.

The original release also came with an “Infotater”, a spinnable dial that allows us to get information about certain monsters in the game. You can see a picture of one above: you turn to the correct monster on the dial and an image and information appear in two little windows. The spinnable version was only included in the original release of the game; subsequent versions used a printed-out version instead that was more convenient but lacked the same sense of style. The Infotater offers information on twelve monsters from Bloodworms to Yipples, gives a brief description of each one, and a set of “colors”. I assume that are for copy protection. The grues’ colors, for example, are black, black, red, black, and purple. The grues are the only monsters I remember from previous Zork titles.

And just so no one thinks I’m shirking on trivia-duties, the “CES” trade show for the guild was likely a reference to our real-world Consumer Electronics Show where vendors lined up to outshine each other, albeit without the use of magic spells. Sorcerer was released just after the 1983 Winter CES in Las Vegas although I have been unable to determine if Infocom had a booth there.

Enough of that! Time to play the game.


We start the game in medias res, in a forest while being chased by a hellhound. We don’t know how we got there. One tree looks climbable so I head up, only to be attacked by a snake. With the hound below and the snake above, I’m trapped and am quickly bitten and killed. Fortunately, it turns out to be only a dream and I am safe in my bed in the guildhall. That’s a strange way to start a game...

Just for kicks, I restart. Is it possible to get farther into the dream? On the next play, I escape the hellhound by going northeast and find myself safe, momentarily, at the edge of the forest. In a few attempts, I manage to get blown up by a minefield and attacked by a swarm of locusts but with perseverance I manage to map out fourteen rooms, including two dark ones. If I manage to escape all of the pitfalls, I will eventually get struck by lightning and die so there’s no way to take this forever. There also doesn’t seem to be a “point” to the exploration except to find a ruined fort, a castle, a river, and other assorted locations. I have to imagine this will matter later because that’s a lot of rooms to design for just an opening sequence...

We wake up in the dark in our room in the guildhall. Our “frotz” spell wore off in the dark so the first challenge is to turn a light on and get out of bed. Thankfully, spell books are mildly glow-in-the-dark so I can read mine to take stock of what spells I have for this situation. I start the game with:


Of those, “gnusto”, “izyuk”, “rezrov”, and “frotz” are from Enchanter while the remainder are new, I lost my spellbook at the end of that game so at least there is some explanation why I have lost so many awesome spells for turning people into newts and talking to wildlife. I also notice that since I have a more senior enchanter, I have permanently memorized “gnusto”, “rezrov”, and “frotz” so I no longer need to read the spell book for them. Convenient! The new spells seem useful and I am curious how the game will treat them.

I admit that I start the game by over-thinking: what am I supposed to cast “frotz” on? In the last game, you could be in a walking-dead situation if you cast it on yourself so I am reluctant to do so now, even if I have faith the game wouldn’t be that dumb as to screw you up immediately. It doesn’t let me “frotz” either the bed or the room so I settle on casting it on my spellbook. Does it matter? I doubt it.


Just outside my room is a note saying that everyone is off having a picnic without me. (Thanks, guys!) It also asks if I have seen Belboz as he’s been acting funny lately. Not the most subtle plot-drop in gaming history, but it gives us something to go on.

Belboz’s quarters turn out to be just across the hall. My success defeating Krill in the last game brought with it some perks! The room has a wall hanging, a potted plant, a large desk, and a chatty parrot. As I walk in, the bird squawks something about hiding a key. He continues yammering on as I explore the room, at one point mentioning that someone should never have lowered his mindshield. Was Belboz the victim of a mental attack? Does that explain his strange behavior? In his desk is a strangely convenient item: an amulet that glows depending on the distance to its owner. That seems utterly pointless for him to have for himself unless he was expecting trouble. As of right now, the amulet is completely dark. Also in the desk is a locked journal, but it is beyond my ability to “rezrov” it. I assume that is what I will need the key for. I eventually find the hidden key behind the wall hanging but it doesn’t seem to work in the journal after all. What is it for? The last item in the desk is the Infotater from the documentation. I take it with me, but it seems fairly pointless since I have my “real life” copy.

While I am ransacking the guildmaster’s room, I get messages that I am getting hungry and thirsty. Again? This is the fourth Infocom game in a row (Planetfall, Enchanter, Infidel, and now Sorcerer) with a hunger/thirst mechanic and if there is one trend that Infocom needs to drop, it’s this one.


I explore the rest of the guildhall but none of the rooms are as fruitful as the guildmaster’s:

I drop the matchbook in the mailbox and wait, but nothing happens. Leaving is also right out because a magic nymph blocks our way. I dream of an evil version of Belboz and he tells me that the real guildmaster thought I could rescue him. I get transported to the “Chamber of Living Death” where I am eaten alive and then regenerate over and over again. I’m in too much pain to do anything so I eventually just need to quit. I can’t even die properly!


Unfortunately, I seem to be stuck for now. I can’t seem to find a combination of buttons on the trunk. I even tried my seeing the future spell! I can see that the colors on the buttons (black, grey, red, purple, and white) match the colors in the Infotater, but if this is copy protection I am missing the clue for which animal I need to use. I’m missing something obvious, right?

With that, I am taking a break and will end the first post right here. More than an hour into the game and I haven’t made it past the copy protection. I must be losing my touch.

Don’t forget that this is an introductory post so you can guess a score. Mr. Meretzky’s debut game, Planetfall, landed with an impressive 48 points on our rating system. Looking ahead, his two Leather Goddesses games received 40 and 43 points respectively. Post-Infocom, we have also reviewed his first two Spellcasting games at 48 and 51 points. Mr. Meretzky also had a small (but some say larger than publicly known) role in Gateway, one of our top-scoring games on the site so far with 65 points. Keep in mind that most of those were graphical adventures while this one is text-only. Good luck!
Posted by TBD at 23:00