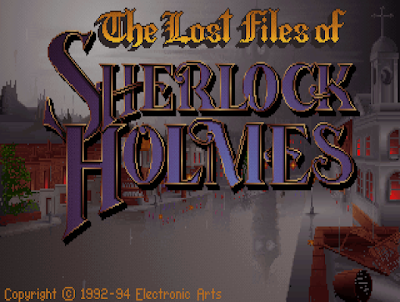 Greetings, friends! It’s time for me to brush off my mouse skills and play a game that requires clicking: The Lost Files of Sherlock Holmes. Despite being released at the height of my youthful game playing, this one is completely unknown to me. I really was a Sierra-snob growing up, but I got better. I reviewed the first game in the Consulting Detective series almost a year ago and I am looking forward to seeing another approach to adapting the characters.

Like so many of these licensed games, the developers do not have a strong adventure game pedigree. This is the first adventure to be developed by Mythos Software, a studio only two years old and thus far dedicated to arcade-style games. It was founded in Arizona by James Ferguson in 1990. James’s team was joined by Electronic Arts team members R. J. Berg and Eric Lindstrom, for game design and story respectively. Mr. Berg and Mr. Lindstrom were both new to their careers with their highest profile work in narrative games being documentation for FairyTale Adventure and Keef the Thief. One potentially shining light on the team was Christopher Erhardt, the producer. We haven’t come across him yet, but he was a former Infocom employee who was brought in to help the company adapt to graphical games. He also produced the Infocom release of Quarterstaff. It’s a new team, but I have high hopes!


Before I get too far, I want to address the question of the game’s title. Many sources, including the left navigation bar on this very site, lists the subtitle as The Case of the Serrated Scalpel. That subtitle does not appear either in the manual or the game itself and I suspect that it was retroactively added to distinguish the game from its 1996 sequel. It doesn’t matter much, but I am crazy and pedantic about such things.

It seems silly to recap the origin of Sherlock Holmes, but I will be brief. Mr. Holmes is the creation of Sir Arthur Conan Doyle, first appearing in print in A Study in Scarlet, a novel published in 1887. The character exploded primarily due to a series of short stories published in The Strand magazine starting four year later. Mr. Doyle had a love-hate relationship with his most famous character and killed him off in 1893, only to resurrect him again in 1901. Additional Holmes stories continued to be published until 1927. In these stories, Holmes is treated as something of a deductive genius, able to observe situations and make seemingly impossible conclusions from what he finds. Holmes is also an excellent actor and boxer, but tries not to fill his mind with topics (such as the sciences) where he cannot relate it to his crime-solving work. Mr. Holmes is also frequently depicted as a drug addict, falling into drug-addled stupors when not confronted with interesting cases. Most of the time, Holmes is a private detective, but occasionally assists Scotland Yard with the help of his companion (and biographer) Dr. Watson. It is supposedly through the fictional Dr. Watson’s writings that Mr. Holmes’s cases have been broadcast to the world.

Mr. Holmes has even by this point appeared in many text adventures and I hope to eventually play the two most famous examples, Melbourne House’s Sherlock (1984) and Infocom’s Sherlock: The Riddle of the Crown Jewels (1987). We have covered his first graphical adventure, Consulting Detective, already on the blog. There are no end to Sherlock Holmes games and after this we will have at least the two sequels to Consulting Detective (in 1992 and 1993) and a Lost Files sequel in 1996. More recently Frogwares has produced a whole sequence of Holmes adventure games starting in 2002 and continuing to this day. I have no doubt there are many more that I don’t even know about.

The manual is fairly typical of the era: some basic scene-setting and an extended look at the interface. The control scheme appears to be Lucas Arts-style with verbs on the bottom of the screen and an overall third-person view. Reading through it all, two features stand out: an “auto help” that clues you into what verbs are useful for clicked-on objects and a “journal” which purports to record all conversations in the game. I’ll have to play some to see how useful those will be.

At the end of the manual are two well-written epilogues. The second is just a brief history of Sherlock Holmes, but the first describes the real-life (as far as I can tell) history of Jack the Ripper, a serial killer that murdered six prostitutes in 1888 in the Whitechapel region of London. The manual discusses several real-life suspects (The Duke of Clarence, Montagu Druitt, H. H. Holmes, and an unnamed foreigner), but then adds a Holmesian touch by suggesting that Moriarty (Holmes’s supposed greatest adversary) may have aided the Ripper and helped to keep him hidden. If this is a Jack the Ripper game, that is also in a long tradition of Sherlock Holmes / Jack the Ripper crossovers. Without searching too hard, I found three unofficial Holmes novels, a Consulting Detective expansion set, and even one of the Frogwares games all feature Holmes and the Ripper in some way. There is obviously deep material to mine here, but I hope the authors were careful to not overly fictionalize the all-too-real murders of young women in 19th century London.

The opening then transitions into an alley behind the Regency Theater. A cat jumps off of a dumpster, knocking a bottle to the ground. A man dressed in a long cloak and hat enters the alley and hides behind a crate. Moments later, a woman in red emerges from the stage door. The man pounces on her, a scalpel outstretched. Moments later, she is dead. Another woman, this time in gray, steps out and discovers the scene. The villain looks up at her then flees. 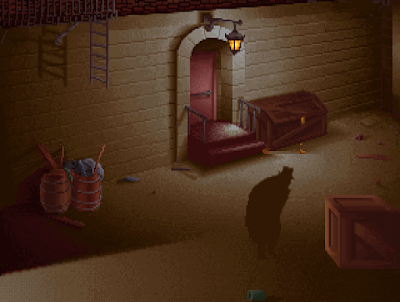 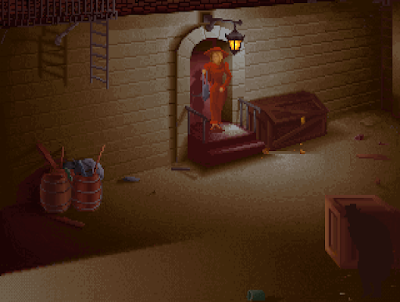 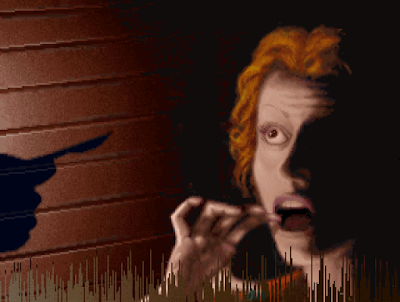 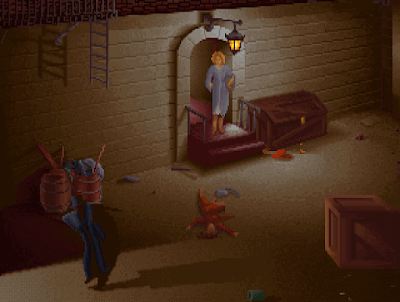 The following day, we watch as a letter arrives for Sherlock Holmes from Scotland Yard. They would like assistance with the case! There’s some great voice acting here, giving us a real cinematic feeling. (As best I can tell, the voices are in the original edition of the game. Bonus!) The scene changes to Holmes and Watson enjoying their breakfast; Holmes seems to know already that someone came to the door and that they will shortly be receiving an interesting new case. This next part of the opening is rendered much less well and feels out of place against the very beautifully composed scenes a few moments before. Holmes and Watson read the constable’s letter and agree to take the case. The game is afoot! 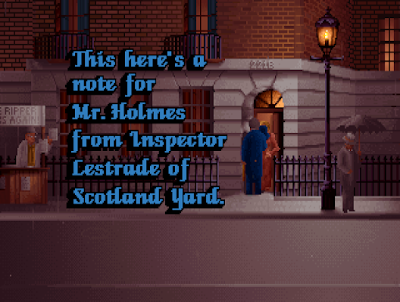 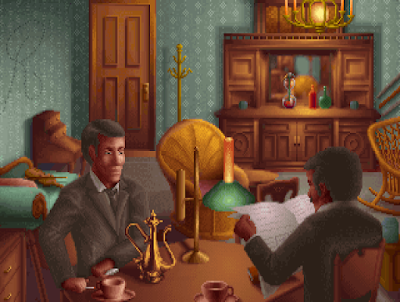 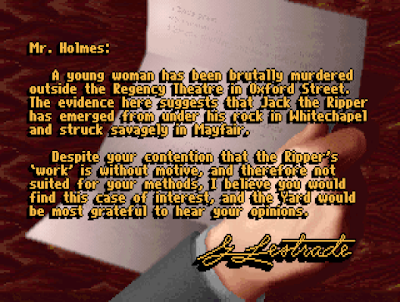 If you were hoping for the grand finale to Sorcerer, don’t worry as that should be done in a few days. After that, I’m going to dedicate myself to playing this game while someone else does the Missed Classics for a few weeks. (We have a great one lined up!) If I possibly can, I will try to squeeze in Seastalker before Inspector Gadget, but we will see when we get there. And since I brought it up: has anyone played Quarterstaff and can advise if it is enough of an adventure that I should include in my Infocom marathon? Some sources call it a cRPG, but it seems to have the Infocom text engine parser around some graphics. I’m totally confused by it.

Since this is an introduction post, don’t forget that you can guess the score. I’m not sure what score I would guess for a game designed by guys who wrote documentation for two mediocre cRPGs and produced by the guy that was responsible for graphical games at a company renowned for not having graphics. Fortunately, I’m not the one that has to guess.