Now that we’ve completed the last screens of another example of french adventure gaming, it’s time to give it its Final Rating. I used to have fond memories of this game, probably because the first half is, all things considered, pretty cool. The fact that it’s loosely based in reality and have you play as a young parisian computer geek might have something to do with it. However, the second half has really taken its toll on my nerves and I was eagerly waiting for the end (as were the developers, I think, considering how this half feels rushed). Let’s see how all of this fares in our beloved PISSED Rating.

The separation in two halves is really obvious here. The first half involves a few fun puzzles. The stupid one with the moose head is not that problematic considering barely clicking on everything leads you to the sequence of events that resolves the puzzle (billiard balls, moose head, first key, trophy case, second key, office, fan) so it’s more funny than annoying. You’re often left without directions and can lose a lot of time wandering around trying to find a clue (especially if you have to restart the game for it). The puzzles however are all pretty easy (until the dreaded wall with the gargoyles) and even if all of these don’t make a lot of sense, it’s all pretty pleasant to play.


The second half of the game, however, is a long and difficult slog. Once you’ve acquired the Laser Arm, you spend most of your time shooting every kind of beam on everything, get randomly killed, and don’t really understand most of the time what is expected from you. I really wanted all of this to end quickly, and I think the developers wanted this as well. Shooting on seven immobile monsters in a row to be able to progress or pressing random buttons on random places awaiting for something to happen is not what I call good puzzle design. Kudos to the weird poetry quizz in the middle of the game as well…

My score : 3. Might seem a bit harsh, but the second half of the game is just insufferable, shooting beams at everything and getting killed all the time is just plain bad design. It’s too long and boring.

At first the interface and inventory might seem efficient and classic, however, there are a few problems that become aggravating pretty quick. First, there is this famous “click on the top-left of the screen to use an object on another object in your inventory”. Granted, it’s only written in the manual, but it just doesn’t work at any time, so an option we didn’t need in the first place becomes a bug just because it wasn’t implemented. Then inventory items disappear every time you leave a screen not necessarily when you don’t need them anymore but any time after that... Why do you keep the key micro as long as the first trip on Bargon for it to disappear afterwards without any explanation… it’s weird and feels broken. Finally, the biggest problem in my opinion is just when the game shifts focus without reason : at one point you’re supposed to stand at one point for something to happen, while your position on the screen didn’t matter beforehand. A few times, little bugs came here and there, with the statue not talking to you for whatever reason or the flower not appearing the first time…


My score: 3. Always work eventually, but feels broken and amateur.

There is definitely something interesting underneath the whole mess, even if it’s kinda fleshed out more in the comic book and not actually in the game. The whole idea of the alien playing some kind of “death game” hoping that once they die, they’ll reappear on Earth against overwhelming odds is interesting. The rest of the story is not that fascinating though. Moreover, most of the time, it’s difficult to understand half of what’s going on, be it by bad writing or broken translation. (Don’t worry though, english player, you’re not missing a lot. I’ve played through parts of the game in french, the writing is not very clear either…)


Half of the game, the story is discreet to say the least, and then, just like the designers realised they have limited time to expose their fascinating story, you’re subjected to five-ten pages of text in a row several times. The treason of Sark is not really explained, just as the power struggle between the unemployed soldiers of Bargon and the Computer Headquarters. Finishing the game on an open end while it seems there is plenty of loose threads is unsatisfying as well…

On the good sides, the fully-voiced introduction, the fourth-wall breaking in the battle against the giant crab and the whole idea of Bargon’s game of death redeem the bad storytelling a bit.

My score: 4. Storytelling is a mess, barely understandable and badly translated. A few good ideas and the fully-voiced introduction avoid the grade to go down further.

Graphics in the game are pretty good, all things considered. The style of the game is kinda weird, but faithful to the comic book. The graphics are nice, well detailed and the scenes are varied. In fact, the lack of coherence attains this part of the game as well. We go from the very nice (the whole introduction, a few views of Paris or Bargon) to the kinda ugly (the design of the characters in the bar and the bakery, the many screens of metals and greens around the end…). It’s a mixed bag, just like the rest.

The sound is serviceable but that’s about it. The sound steps were less horrible than I remembered and I was more annoyed by the sound of the laser (shiouk shiouk) because I was required to use it all the time. Don’t get me started again on the frightening death theme that made me lower the sound of my computer the first time.

My score: 5. Mixed bag between the pretty and the Meh...

There is definitely a good idea in the concept of the game. There are not many games taking place in Paris, and even if the Paris in Bargon Attack sometimes feels like a collection of landscape (Eiffel Tower, Beaubourg, La Seine, Fontaine Notre-Dame, Colonnes de Buren…), it’s kinda nice to evolve in it. And I’m guessing the whole idea was to start with the familiarity to progress then into the alien worlds of Bargon. However, the trips back and forth between Bargon and Paris, without any explanation, tend to break this nice idea.

The truth is, you’ll never know where the next screen will bring you, and while there is a fun side to this, you spend more time feeling lost and just moving to the next screen than trying to pursue an objective. At no point did I have a feeling of coherence of an existing game world. The Cadavre Exquis feeling is overwhelming and you really feel like the developers were slapping one idea to the next without ever thinking about the bigger picture. Shame, because it could have made something nice in this department.

My score: 4. Interesting views of Paris and Bargon, but the lack of coherence ruins everything.

Not much to say here unfortunately. You spend a lot of time alone in the game, or with people that tell you stuff during five screens of text. There is very little character interaction per se, except with the bar tenants and the baker. Every interaction that could have been interesting is conveyed by the overly long cutscenes, and you don’t really have another motivation except “the world must be saved and someone has to do it”. No one explains why our character is special in any way or why he was chosen by Sark to begin with.

My score: 2. Our world saving has been a lonely one.

So for our final score, we have (3+3+4+5+4+2)/.6 = 35! I think it’s well deserved. I’ll even remove a discretionary point just because the game was so soul-crushingly boring in the end. The game started okay, that’s why I kept a nice memory from it from my childhood, but it just crumbles around the middle and what we have left is “use different beams on everything, die randomly and try to figure out what was in the developers’ heads”. If at least the game over screen (that I’ve seen hundreds of times) had some kind of ironic little phrase each time, à la Sierra, it might have made the whole experience less boring, but it didn’t.

So, congratulations, Laukku, you were the one who guessed the lowest score, and you win! Sorry guys, I think everybody felt this game would do better, me included, but it’s not the game that will save the french developers reputation... 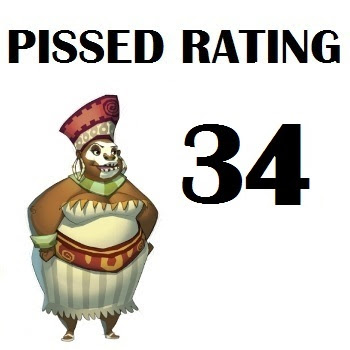 I’ll then move on to Dark Seed, which is another game I’ve always been curious about without ever being able to go far in it. Let’s hope it fares better than this one!

How about some CAPs now :