Eternam - When You Can Count Your Money, You Ain't Got None!

I'm not gonna lie – this game is a struggle. Staring at an empty DOSbox prompt with “DRIVE:\ETERNAM\>” is something I'm almost frightened to admit to. Eternam hasn't quite given me PTSD, but boy does it feel like it is capable of as much. The cardinal sin is that the game isn't so much weird as incomprehensible. I understand every word that is in front of me, but it just doesn't come up into coherent sentences. This section was almost something I'd call easy, but was made difficult by what I would imagine is partially an issue of translation issues and partially of desperate attempts for humour which are largely just inane.


When I last left off, Ethelred had half-heartedly assigned Don King, ex-boxing manager extraordinaire and famed wearer of inanely tall hair, to go and perform some 'ordeals'. Not what they were – there was not to be a grand stage play he was to save, nor a dragon to slay – no. Don's task was to find the ordeals, perform them and then come back. It's as silly as it sounds (and again, it's not really Monty Python absurdity so much as it is just 'hard to follow'). There's only one obvious place to 'perform' them throughout the castle however, so it's pretty obvious that you need to go to the right of the staircase which leads to the top floor of the castle (yes, this is a castle with only two stories somehow) and down the little chute which appears to lead to a basement. Dungeon? Dungeon basement.

I'd already scoured the castle in every place I could search, so had a medieval camera (no idea still what this is), infrared glasses, a match and onion skins to get me through the 'ordeals'. Landing in the basement via chute, we're greeted by 'Yorick' (ha! Shakespeare joke), an animate skull which tries to give some rather cryptic clues as to how to make it through. I'd left off last post after solving the first two puzzles. The first was a pair of Medusa-like eyes appearing in the wall (which were done in by onion skins making them cry, which means that it's actually just 'peeled onion' and not the skins methinks). The second? Giant pillars of fire. These were solved by standing in the wash of the crying walls. The next room had me momentarily stumped too – for no apparent reason, the floor simply disappeared under me.

Somewhat unintuitively, the 'speak' command was the way out here. I'll be completely fair and give kudos to our fine French overlords for giving a clue to every failed 'ordeal', at least. Every time you fail, no matter the reason, you end up with Ethelred reviving you with his magical scary masseuse-cum-doctor and giving a Lord British-reminiscent pep talk, including his completely original catch phrase of 'May the Force be with you!'

The rest of the 'ordeals' are decidedly less than arduous. The first one involves simply not going through a door. Naturally, the correct path is littered with 'actually, go here!' signs to make it appear a trap. This gives the above shot of a random cannon firing and shooting Don into the wall, flattening him like a pancake. The next 'ordeal' involves a huge 'green swamp beast' (and this I only call thus because that is literally what the game lists it as) – it's behind a great big set of cell bars. If you go up and talk to it, you get a few really bizarre dialogue options. 'So you're a long way from home too.' or 'See you round!' lead to the cell bars raising and it killing you, for instance, for it to randomly scream its name. Ethelred mentions that the trick is to 'pretend he's not there'. Walk past him, you say? Again? So a second useless ordeal, in other words. No problems!

The next couple of rooms are nice and simple inventory puzzles. Using the 'infrared glasses' you can find elsewhere in the castle allows you to avoid tripping a trap which bisects Don at the hips rather violently (you have to follow a path left in the ground, but it's not particularly difficult.) The next is a room full of wooden furniture. Walking inwards leads to a small chest of drawers full of ties crushing Don – setting fire to the room was obvious enough that I nearly didn't even get myself killed to find the trap. The issue I have with this game is that you can't really use the 'look' command to get an idea of what you're doing – I perceived no real risks within most of these rooms not because I am overtly trusting, but because there's no real reason to think otherwise. From here, there's a couple of levers in a room next to another empty room – tooling about with them enough leads to the floor raising in an elevator, and the ordeals are passed!

Ethelred is still.. well, I suppose the term might be eccentric? It's not as though he's in any way upset with our success, but there's definitely the feel that he's not too interested in telling everything that he knows. This is essentially a great big plot dump from here, along with a little bit of a geography lesson. We're presently on the continent of Cauda, where he rules. To its south, there's a small area called Paw Island (which I suppose means there's likely going to be some way of travelling over seas given the way it is so implicitly mentioned). The isles to the east of Cauda he (and his scribe who makes the maps) know very little of, largely because their inhabitants are a 'degenerate race, bloodthirsty and quite pitiless!'

The character portraits are actually fully animated to be fair, but I could probably take about twenty screenshots for the two that would look truly appropriate. Basically, Ethelred begins to lay out the issues – Cauda is presently cut off from the rest of Eternam because the ship that typically arrives once a month to deliver goods and load Cauda's exports has not been back for the past six months. It turns out that the continent's only ship (only ship! Small world!) went down with all of its crew a year prior, leaving them to the mercies of the ship owned by others. As such, our broader quest is to rush about and attempt to find out what has occurred here. The ship elsewhere in the castle makes a touch more sense here – it turns out that Cuthbert, Ethelred's son was obsessed with creating a new ship to set to the sea.

Finally, after explaining all of this, Ethelred states that we're to inspect the 'nearby island of Dorsalis' for him. On beginning to speak of the likely 'real' reason (which I expect to be that his son went missing there some time ago given that the jester by the ship kept mentioning Cuthbert's wanderlust whenever I spoke to her), Ethelred starts to become belligerent that he's being interrupted and cuts him off. He then states that we are getting a 'terrifying lethal weapon which will prove of immeasurable help in our quest'..

He sends us to the 'captain of the guard'. His office is apparently the first on the right once inside the castle. This sounds perfectly sensible to me – I even know the place that he must be talking about! I'll interject here to state that I found another item only after lots of random running around in a set of keys. As soon as I found this, I knew where to go. I did not find this immediately, however. Instead, I followed the directions of Ethelred. This leads to a guard. This guard has absolutely no new dialogue, but does speak at least a little. I was thinking that this must have involved some sort of cryptic clues that I wasn't getting.. nuh uh. Turns out this was just quite plainly a mess up in translation or something – he meant to the left when entering, leading to the guy who is angrily looking for keys. 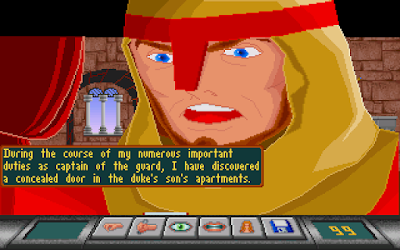 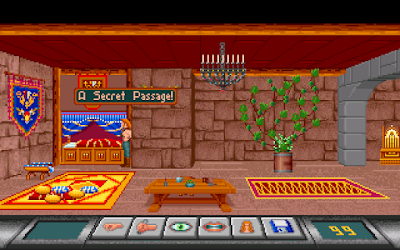 This doesn't really lead to much, in truth – he just tells us about a 'secret passage' through the son's quarters leading to Ethelred's, giving us a way of actually visiting him due to the last post's issue with Don's dirty shoes. I'd figured just giving him a new pair of shoes would have been the solution. Speaking to Ethelred in private, he gives us GP (which I assume is short for either 'Gold Pieces' or 'German Pornography' – I'm leaning towards the latter however). He does so two more times until he just says hello, so this could be a recurring way to get money? I'm not sure. Anyhow, I'm now at the stage where I'm due to leave the castle again. There's one vague goal and one precise goal (find Cuthbert, probably by visiting Dorsalis)... and then I'm on my own. This game would probably make a great platformer or FPS – unfortunately, it doesn't seem to be doing a great job as an adventure title at present. 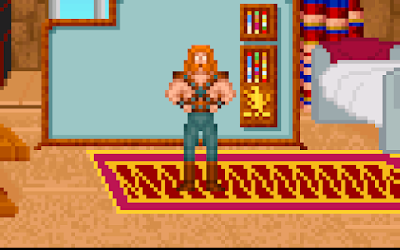 Note Regarding Spoilers and Companion Assist Points: There’s a set of rules regarding spoilers and companion assist points. Please read it here before making any comments that could be considered a spoiler in any way. But I want spoilers. I'm afraid to leave the house now. Please, spoil me?
Posted by Ilmari Jauhiainen at 23:00