A few weeks back, I conquered mainframe Zork (also known as Dungeon), one of the most influential text adventures of all time. It was a fantastic game but a true marathon: at more than thirty-six hours of play (not counting my look at the 616-point version afterwards), it is the longest game currently on the site. It had plenty to explore, well-designed puzzles, and a parser that is still best of breed. Written by students for a very specific MIT-flavored PDP-10 system, it wasn’t intended to be a commercial success. It was a fun coding project by a bunch of guys that really thought they were going to get real jobs after graduation.

That is where the story of Dungeon ends and the story of Infocom begins. In 1979, the original designers (Tim Anderson, Marc Blank, Bruce Daniels, and Dave Lebling) formed a company together. It wasn’t a gaming company. It wasn’t intended to sell Zork to the masses. It was a way to keep the band together as they transitioned to “real” projects. That they changed adventure games forever happened entirely by accident.


While others on the team thought about serious software, Marc Blank and a new collaborator, Joel Berez, experimented: how much could mainframe Zork be compressed? At nearly one megabyte in size, Zork was enormous by late-1970s standards. They could not approach that amount of memory on personal computers of the day but floppies were nearly large enough. By building a custom engine and paging to and from disk, they could just about squeeze an abridged version of the game onto a personal computer. Dave Lebling returned to streamline Zork to fit into the new constraints while Joel and Marc finalized the engine. This evolved into a fully interpreted game system capable of “write once, run anywhere” decades before Java made the idea commonplace. Infocom negotiated with Personal Software, a huge name in early 1980s productivity software, to distribute the game. Zork I hit the shelves-- terrible cover art and all-- in December 1980 for the TRS-80.

Diving into Zork I is surreal after having played so many hours of Dungeon. Nothing is exactly as I expect it and at first even my fingers rebel from “muscle memory”. Because this game is essentially a refactored Dungeon, it is difficult to talk about separate from that game. If you are joining us late, I cannot recommend reading this without looking at my review of the original first. With that out of the way, let’s begin!


Playing It Again, For the First Time

Zork I starts exactly where Dungeon did: the mailbox by the white house with the boarded front door. From there, it’s deja vu as we find the leaflet, the forest maze, the window at the rear of the house, and the trophy case inside. And yet, everything is also just slightly different: there are no explosives in the attic, we can see the chimney leading to the cellar in the kitchen, and the forest is laid out differently enough that I have to map it over again. I quickly discover that I will have to map everything again.

After I descend into the Underground Empire, it’s apparent just how different the game really is. While most of the rooms are accounted for, they are connected in different ways. Some things are simplified: mainframe Zork loved connecting rooms in asymmetrical ways but now when you go west you can almost always get back to where you were by heading east.


The area under the house exemplifies this, but I could have picked just about anywhere in the dungeon and found the same. Zork I replaced Dungeon’s six rooms in something like a figure-eight pattern with five rooms arranged in a straight line. All exits are bidirectional and the rooms align nicely with a grid. The chimney is now one square east of the trapdoor, for example, just as it is above ground. The Twisty Maze, and from there the Thief’s and Cyclops’s rooms, are off to the west instead of the east, allowing the connection with the living room to make sense. You almost have to compare side-by-side to see how much they changed. Also missing are the one-way passage from the Torch room (now part of the Temple complex) and the Bank of Zork (presumably in a future installment). Neither of them made sense to be near the white house anyway and moving them is good worldbuilding.

I am getting ahead of myself. Rather than narrate the whole game straight, let me tell you what I found. This is mostly in order:

When you collect and store the final treasure, you get a message that says, “Look to your treasures for your final secret.” There’s now an ancient map in the trophy case which we can follow to find the Stone Barrow and the entrance to Zork II. What is missing? Off the top of my head, I did not find the volcano, the glacier, the giant well, Wonderland, the robot puzzle, the sliding puzzle, or the endgame. There’s probably more and I should make a spreadsheet...

Rating this game is difficult because we must evaluate it on its own merits. Most players would have come to these puzzles without the baggage of 30+ hours of Dungeon. Even so, I feel underwhelmed. This is a pale imitation of the expansiveness and cleverness of mainframe Zork. A kernel of that still found here but without most of the best puzzles, ASCII graphics, or the majority of the difficulty level. This is “just” a treasure hunt now, but let’s see how it does in our scoring system:

Puzzles and Solvability - Many of the most creative puzzles didn’t make the transition to this game, but what we are left with is still very good. The updated versions of the Dam, the Loud Room, and Temple were welcome, but less so the river rafting which lost most of the challenge. We have to evaluate this game only in its own context and what we have is vanilla but a lot of fun. Score: 5.

Interface and Inventory - The Infocom parsers are still fantastic and this game retained most of the excellence of the MDL parser despite the cramped conditions. I can’t do much worse than rate it the same. Score: 5.

Story and Setting - I love this setting, but this game doesn’t really go anywhere. Without the later stages of the original Zork, all we have is a basic treasure hunt and an ending that little more than “explore over there next”. This game world and setting feel more like a real place. The environment makes sense in a way that mainframe Zork never managed to do. Score: 4.


Sound and Graphics - All of the ASCII art that was present in mainframe Zork have been expunged, either because the illustrated items and puzzles were moved or because they didn’t know how to handle it on mixed-size displays. There is only one score we can give. Score: 0.

Environment and Atmosphere - In many ways, this is the superior version of Zork with a consistent world and an environment that was humorous but didn’t hit you over the head with it. And yet, it’s also considerably less varied than its predecessor without any glaciers, volcanos, or giant wells. Still a joy to explore. Score: 3.

Dialog and Acting - The writing remains top-notch, helped in no small part because this was an opportunity to go back and polish everything. Score: 4.

That gives us a final tally of (5+5+4+0+3+4)/.6 = 35! That is significantly fewer than the mainframe version of Zork, but in good company with other adventures of the era including Spider-man, Shadowgate, and Winnie the Pooh. It’s hard to get around that this was only part of a completed vision. Will we have to wait for Enchanter to have a real Zork game that was designed from end-to-end for personal computers? 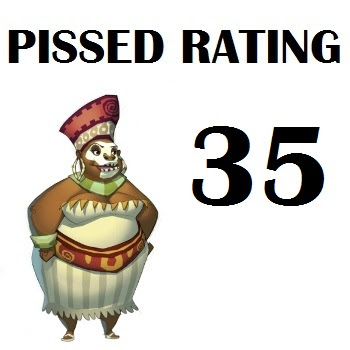 Looking at the guesses, most of you guessed a lot higher. Mainframe Zork was a classic and this condensed and abridged version lost a lot in that translation. Lakku guessed the closest and will win our prize! CAP distribution will come with the next mainline game to be completed.

With that, I am off to play Zork II and see how this series evolved. I’ll see you all in a few weeks.
Posted by TBD at 23:00