Martian Memorandum - I never thought I'd be smuggling myself

Tex Murphy Journal Entry #3: And I thought the jungle was hard? I made my way to the smuggler's base, managed to make my way past one guard and EVENTUALLY avoid another, but I have no idea how to do something as seemingly simple as emptying out a crate. I've been hiding behind the crate for most of my time here with no idea how to proceed. Am I doomed to stand here forever? Or will I somehow get some assistance?

My first plan for this session was to go back and get the ladder correctly rather than magically shooting one out of my ars... I mean, gun.

Fry pointed out in the comments that the junkyard scene scrolls to the right. In my defense, you have to get far to the right before it starts scrolling, and the scene LOOKS complete enough as is. I'd previously gone enough to the right to get killed by the radioactive pool, but if I'd just gone a little further...

I went further and found the ladder. I also noticed that I could OPEN a small hatch on a junked car and get some Rubber Boots. Seems like a useful thing to have if I need to stand in water while touching something electric (or just jumping around in muddy puddles for fun) so I took them.

My head sank at the thought of going through everything else I'd done since that scene (expecially the quicksand maze) but then I realised that none of that was necessary – I could still access all locations! I reloaded my latest save, went back to the junkyard and got the boots – pleased with myself, I then made my way to the smuggler's base.

But before telling you about that, I should mention that Fry, in my first gameplay post, pointed out that I didn't get the best ending to the Rhonda conversation. (Fry has become my unofficial conscience in this game – pointing out where I went wrong but succeeded anyway and virtually daring me to try again and bloody well do it right this time.)

Yeah. That's it, baby. I want to hear all about the Trans-Martian Shuttle

But seeing as I''m still using my original save games I officially didn't grill her in her underwear and I magically conjured a ladder using nothing but force of will alone.

Back to the present, I enter the smuggler's base. They've built their base inside an old Mayan pyramid, and all I have to do is get past this guard. Maybe I'll be able to simply talk my way past him. 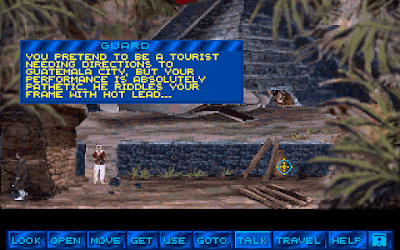 Well, that didn't work. I thought for a while that I'd missed an item until I saw something after moving a little to the right. I'll show you in this picture. 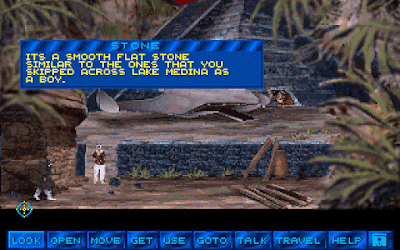 See that small blackish blob to the left of my feet? That's a stone. I throw the stone at the priceless Mayan jug to the right, and the stupid guard walks over there to investigate, allowing me to sneak through the gap and then into the pyramid.

Once in the pyramid, I do my usual tactic of standing still and LOOKing at everything when suddenly...


Okay, the guard probably saw me through the doorway. I move towards the table at the bottom, way out of sight of the door. Now I can take my time and loo...


This annoyed me for a while. I thought perhaps I'd hit a timing bug, which sometimes happens with old games on new systems. Some quick internet searching found nothing, so I guessed I might be wrong there. It seemed I had about 8 seconds before I got blasted. I tried for ages to get things done before I got killed.

There were a few things I figured I needed to do:


Obviously I needed to get the remote control, open the crate and get in the crate before time ran out. But after many tries, I decided it was impossible. At most I could get the remote, but die as I was trying to USE it on the crate. I definitely had no time to walk towards the crate, and I couldn't get the remote without walking towards it (which is unusual for this game.)

Seeing as I still hadn't shown you all the HELP system, I thought now might be a good time. And it has nothing to do with the fact I actually seriously needed HELP at this point. 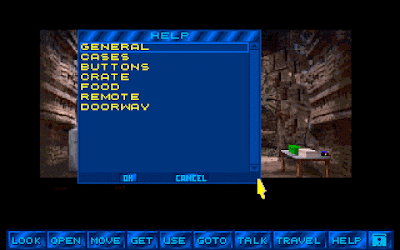 And here's what happens when I click on GENERAL... 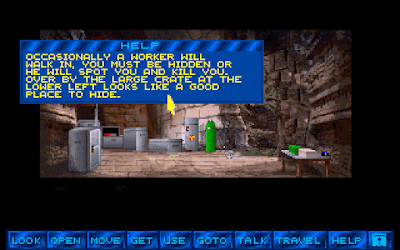 You have to be kidding, game! It was unclear that this was happening. The game should have had a warning such as “You hear someone coming” a few seconds before showing Tex with a hole in his chest.

Or even if the death screen said “A worker comes in and shoots you” instead of the generic message that's the same as the message you get outside when the clearly visible guard can see you.

I'm claiming I'm perfectly justified in looking at the HELP on this occasion as the game wasn't very clear what was happening.

The help system is very rudimentary. Each category has a simple paragraph. As another example, clicking on 'DOORWAY' gives "The Doorway leads back out to the ship. There's really no reason to leave. Everything you need to do is in here." So, does anyone know if this is the first time a Hint system was included within the game? It's certainly a good idea, particularly for a game made before the invention of GameFAQs.

So. Seeing as the help told me to hide behind the crate, I did. The game gives you enough time to get there before the worker arrives with a little to spare.

He walks in, goes behind the crate, then walks out carrying something in his arms.


After he leaves, I have some time to try things before he comes back. I can take the food and remote control, and use the remote control on the crate to open it, but there are some plutonium transport cases secured to the inside of the shipping module.

And this is where I was completely stuck. And where this post was originally going to end with a request for assistance.

I'd tried moving the cases, looking at them, opening them, using a shovel on them, even talking to them. Nothing seemed to work and there appeared to be no way to get them out of the way so I could fit in the crate.

At this point, I came to the natural conclusion that not only do I hate this smuggler base, but I hate all smugglers and everything they stand for.


It wasn't until I was editing this text and looking at the screenshots that I finally had an idea. I started the game up and tried...


Tex Murphy Journal Entry #3 Addendum: Okay. I've worked out how to GO TO the crate. Now I'm on Mars and ready to deal with Big Dick Castro – one of the people on Rick Logan's list. I wonder if he'll be happy to see me... 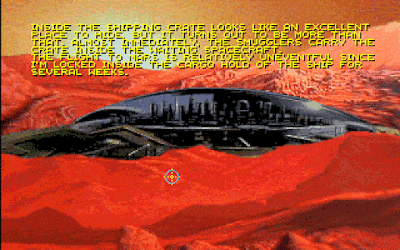 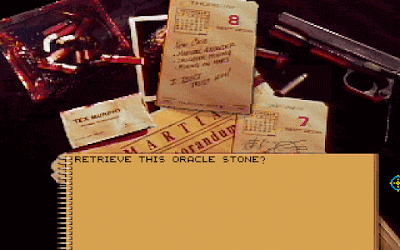 You couldn't find any way to edit this text to fit one page?

I've finally made it to Mars. Somewhere on this planet is a memorandum. And I want it!

There's an alley between the two casinos, but I don't find anything there so I try the door to Big Dick's. A voice asks “What's Da Password?”

So, I need a password. I fleetingly think that perhaps I missed a vital clue back on Earth, but put those thoughts aside and go back to the alley for a more thorough search.

This time I find a rag I can move that gets me a broken flashlight with working AAA batteries, and a wooden board I can move to reveal the word “BOMBSHELL”


After saying “BOMBSHELL” to the doorman, I can now enter Big Dick's


I pick up the item on the ground near the right set of stairs. It turns out to be a Big Dick Trading Card which has his photo and latest financial statistics on it. Seems like the kind of thing I could use to steal his identity with. I go to the bathroom where a construction worker leaves his blueprints behind in the bathroom stall. I briefly consider running after him to let him know but that thought quickly leaves my mind and I pocket the blueprints on the odd chance they might be useful to me later.


Finding nothing else of use in the bathroom, and having learned my lesson from the junkyard incident, I move right in case the screen scrolls. It does, and I find the entrance to an office.

I enter the office, and am immediately knocked unconscious by two large goons.

When I come to, I meet the man himself, Big Dick Castro.


And because I want to know what happens when I don't pick up the food before going to Mars, I reload the game back to the smuggler's base and...


Next time, I'll be dealing with Dick and probably entering the dreaded air vents the manual warned me about via the bathroom. And I hopefully won't be stuck as often as I was in this section of the game