Tex Murphy Journal Entry #1: It seems like I might be able to catch up on my rent and electricity bills. My new client is the richest guy in the world, Marshall Alexander, who wants me to find his missing daughter. I didn't get a good look at Alexander. He's dark and mysterious, like the Brew 'N Stew's soup of the day. I found a few leads but nothing solid as yet. Looks like I'm in for a long case 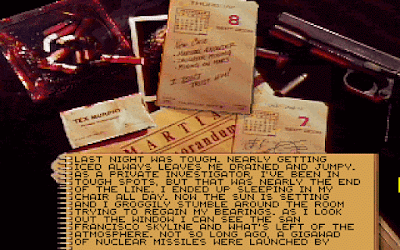 I start the game in my office. There's mail on the floor so I grab it – apparently someone mailed me cash in an envelope. Not a very safe way to send money, but I'm not complaining. Money may not buy happiness but it can buy a cheap bottle of bourbon to help me forget about my troubles for a night and that's as close as I'm likely to get in the near future.

The interface is easy to use. I can stand in the same place and just use my cursor to LOOK at everything, attempt to GET everything, MOVE everything, etc. I pick up all the items I can find. I end up with a camera, a nonspecific amount of cash, a gun, ammo and a lockpick kit. I also pick up my comlink which is a mistake because I'm not in the mood for work right now. My assistant, Stacy, immediately comes on the line.


A switch on the wall opens the blinds so I put my camera on the tripod to see what I can see.


I also see her accepting money or something in another room. Does she do business deals while naked? If so, I think I found my new business partner.

A few more rooms away I see Norman's mother sitting by the window as she always does. Lovely woman, but I sometimes hear her arguing with her son – I don't think she's very nice.

The only other windows with people in them has a couple kissing and a man sitting on a chair looking out his window (Jimmy Stewart, I'm guessing)


I ask Stacey for info on Marshall Alexander and Terraform, as well as myself (in case she knows something I don't.) Terraform will be founded in 2019 with the mandate of terraforming the Martian surface - get your act together Martian colonists - you have three years!


I decide to visit Terraform, because apart from spying on my neighbours, that's my only option at this point. Most places you visit begin with an establishing shot, then a page of text setting the scene.


The secretary, Rhonda Foxworth, lets me see Marshall and he tells me about his daughter's disappearance, and also his loss of another object, but no one can know it's gone. He doesn't clarify what that object is, so I'm left with little to go on in that regard. I somehow think that, whatever that object is, it will be vitally important to the case.

Checking my comlink, I now have new information. 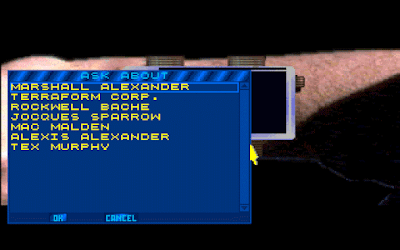 Here's a short summary of the information I get from Stacey...
As I leave Terraform, Tex gives his own thoughts on the case. Notably there's nothing to prove Alexis' disappearance is a kidnapping and the mysterious 'something else' seems more important to Marshall than his daughter.

I first decided to visit Captain Jocques Sparrow. He isn't in his office, so being the super sleuth I am, I break in and rifle through his stuff. Before I can find anything, the door knob turns and in comes Jocques.

I try speaking to Mac Malden. Tex and Mac have the make-fun-of-each-other-but-really-like-each-other cop/detective relationship 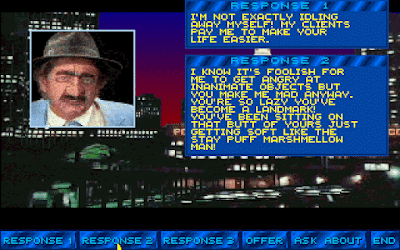 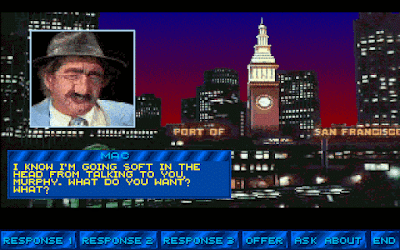 After trying various options while talking to Malden, I can't ask him questions but he finally tells me that he needs evidence on the Andretti case. Looks like I need to find some of that evidence before he'll talk to me.


I ask Bache about everything. I get info on most people, specifically he mentions that if Marshall dies and Alexis isn't available, the company goes to his wife, Nora Desmond Alexander. He thinks the company would be in better hands with Alexis. Is Marshall close to death or something?


I check out Alexis' home to see if there are any clues. 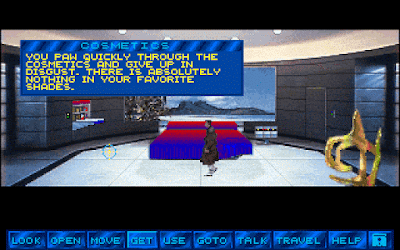 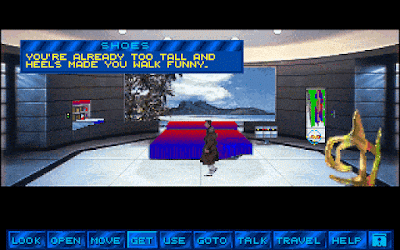 When I move the pillows, I find several baby teeth. You might be finding the worst part of this that a little girl has been patiently waiting until adulthood for the tooth fairy to arrive - but I'm more concerned that this bed not been cleaned in the last 20 years?

I also found a small piece of paper on the ground with the letters TMS on it. Stacey tells me that this stands for Trans-Martian Shuttle and that if I was looking to go to Mars the next one doesn't leave for four weeks.

I moved the bedspread and found a box with an apartment number on it. It doesn't seem to have an actual address, but that won't stop me.


I go to Chantal's apartment and am surprised to find that it's just across from my own office. I wonder if we've ever seen each other.


I mentioned I've seen other things with my camera. Her response is... if you had proof, you might have something – methinks I sense a hint!

So, back to the office. I know what I need to do. I have Captain Jocques Sparrow's film so I USE it on my camera, then look again.


I grab the photos then go back to her apartment. After OFFERing her the photos, she agrees to answer my questions.

She has a few things to say about most people, but most importantly we learn a new name from her – Rick Logan, who seems to be Alexis' boyfriend.

I decide to check out Marshall's wife. Her house is massive, she used to be in films when I was young but has now had so much plastic surgery she could pass for her own mother. She's also totally sloshed.

She has a lot to say but nothing that furthers my investigation apart from another name. Apparently Lowell Percival in interested in her and he's a powerful man who'll soon be bigger than her husband.


Unfortunately, I've spoken to everyone and nobody seems to know about Andretti. The brainy lawyer says that he was murdered and Stacey tells me the same thing. So I still need that info before Malden will talk to me.

I feel it's time to see Marshall again and ask him about the new things I've learned.


I assume there has to be something do do here so I look at and touch everything I can find. After I move the towel for no reason other than I know I'm a character in an adventure game, an item falls to the ground.


After giving her the expensive earring, she offers me dinner


So, off to the Plaza Hotel. When I arrive I can go to the gift shop on the right or the restaurant on the left. Clearly I should buy a gift first so to the right it is.

Fortunately I don't have to guess what the perfect gift is. Clicking on anything but a rose gives me the same message.


Assuming I have an unlimited supply of cash, I buy the rose and meet Rhonda at the posh restaurant. Her dress left little to the imagination, which is good because I have a terrible imagination.


This is a conversation with a lot of options. The whole conversation seems to be able to end in one of four ways.
I can continue playing the game from the first three situations but I guessed that would be unhelpful and perhaps a dead-end. After a bunch of reloading and noting her reactions to my answers on a piece of paper, I found the correct strategy. She wants me to be a hard PI who won't let a woman tell him what to do. As the conversation continues, she gets more excited until I finally get the option to ask her questions. Rather than dampen her mood as I'd suspected, she just promises to answer my questions when she's back at work.

Here's a clip of my successful conversation. The acting's a lot better than King's Quest V, that's for sure.

After 'winning' the conversation, I end up back in the hotel foyer (Presumably after spending the night). I go back to Terraform to see if Rhonda is ready to keep her promise of information.


Most of her information just reiterates what I already know but in slightly more detail: Marshall has become more paranoid lately; He recently received a package and soon after became more agitated and started arguing with Alexis; He was more worried about 'it' being gone than Alexis the day after she went missing. I also found out she used to work for Lowell Percival.

One interesting piece of new info I got was that Alexis had a crush on Rick Logan for a while but he kept ignoring her until one day when he suddenly did a 180 and became really interested in her.


Even with that new info, I don't have any further leads so where I go to next is a mystery. I may have missed something. There may be some other clue to find either at my office, Alexis' home, Terraform or the Plaza hotel. I never did need to use the rose to woo Rhonda so maybe I should offer it to the evil stepmother. I'm not sure if I can talk to Chantal again now that she already has my photos and I never did get much information from Captain Jocques so there's quite a few things I can try next time.