I was sitting in my study pondering my next move. Rain was hitting the window with significant force, like a Lytton cop hitting an uncooperative suspect. I needed to write an introduction to Martian Memorandum, but wasn't sure how to begin. Being a big fan of the later Tex Murphy games – what can I say, I like my detectives like I like my eggs, hard-boiled on the outside but soft and runny on the inside – I wanted to show people what was both good and bad about Tex's earlier games. Without a specific plan and deciding to just write what seemed interesting, I made myself a cup of coffee and got to typing...

Okay, it's time for our third game from Access Software and our second game in the not-yet famous Tex Murphy series.

If you've seen my avatar you won't be surprised to read that I'm a fan of Tex Murphy games. But, perhaps more surprisingly, I'm NOT a fan of the first 2 games. I've played Mean Streets and Martian Memorandum once, for completeness' sake, many years ago and haven't revisited them since, despite having replayed the next 3 games multiple times. I would have used a walkthrough whenever I was stuck back then so this will be the first time I go through the game without that crutch. I've read a little about Martian Memorandum and there are apparently dead ends, so I expect to encounter at least one. (I'm still having nightmares about King's Quest V's rope/branch dead end.)

I will be counting on you people to inform me if when I get stuck - the discussion about deliberately not telling Trickster he was dead-ended in Les Manley has me a tad concerned, but I trust you won't do the same to me. You wouldn't want to betray that trust, would you?

To start, I thought I'd have a look at the cover art. What do you do when you have more to say than will comfortably fit on a front and back cover? Simple, you print four pages of cover art!


After Mean Streets and Countdown, for Access' next adventure game they put the spotlight back on the face of CFO Chris Jones' character, Tex Murphy, purely because Mean Streets sold a lot better than Countdown did.

For those unfamiliar with the series, the Tex Murphy games' atmosphere is an unusual mix of noire, sci-fi, drama and humour. As the manual says, “Even though the year is 2039, the mood, characterizations and ambiance are set in the typical style of the classic Hollywood detective movies.”

Two obvious differences from Mean Streets are the removal of the flight simulator and side scrolling shooting sequences. I don't think anybody missed either of them. I know I won't be lamenting their loss (and am in fact somewhat celebrating that I won't have to deal with them.)

I'm playing the version from GOG, but with a simple settings change. While playing around with the settings, I find the music seems to sound better when I choose Roland so that's what I'm listening to.

The manual gives me a feel for the types of activities I'll be performing. It seems I'll spend much of my time searching rooms for clues, interrogating suspects and moving through a duct.

Much like in Mean Streets and Countdown, I'll be looking for clues in screens that look a lot like this...


From the looks of this screenshot, this game uses a slightly updated version of Countdown's engine, which Aperama reviewed way back in October last year. The main difference seems to be the removal of the “TASTE” verb, which I'm sure has some of you sighing in disappointment. New for Access, and a fairly new feature in adventure games in general, is the "HELP" button, which gives you “Hints and Tips.” which seem to act like a walkthrough of sorts. I won't be using them for this playthrough, but it seems like a great idea for an adventure game if it works as advertised. I might try a few of them after playing around in the first area just to show you what they're about. 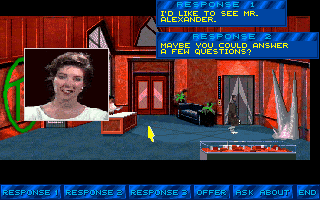 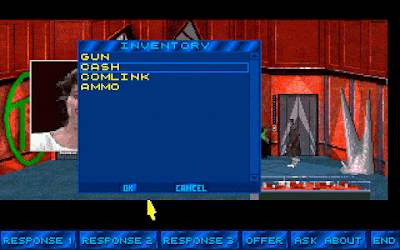 
Traveling is apparently available only when the situation will allow it. The example the manual gives is that “If Tex is tied up in a basement, he will not be allowed to get out by traveling”

This gives me bad memories of playing King's Quest V when I spent a ridiculously long time stuck tied up in an inn basement before being kindly murdered.

The manual also contains a list of commonly asked questions, none of which are actual questions. They generally involve choosing the right interrupt for your sound card and other technical issues, but to add to my unnatural fear of mazes, the last of the frequently asked statements is “I've tried everything and I can't get out of the duct!”

Here is the answer:

Because the duct is difficult for some people to visualize, we've added a bonus feature to minimize your frustration. While holding down the insert key [INS], press the "O" key and move in any direction. This will take you out of the duct.

Why does this answer not give me confidence that it will be a well-thought out maze with a simple and rewarding solution? Don't worry, for your amusement I won't be using the 'insert and O' key combination.

There'll be a little bonus for whoever guesses the score for this one. I bought an extra copy of Tesla Effect: A Tex Murphy Adventure a while back so one of you lucky people will receive Tex's newest adventure for the low, low price of correctly guessing the PISSED rating I give this game. So don't forget to get your guess in.

And, in a case of good timing, if anyone wants to play along you could get this game plus Mean Streets, Under a Killing Moon, The Pandora Directive and Overseer quite cheaply when this post was written, but probably not now.

Despite not having terribly fond memories of the game, I'm really looking forward to sinking my teeth into it, so let the gumshoeing begin!
Posted by TBD at 17:00