King Graham of Daventry Journal Entry #7: It's finally over! Mordack is dead and my family is safe - I may even have found my son a suitable royal wife into the bargain. All I had to do was wait in Mordack's study for an unreasonably long time and everything else just fell into place.

I know I've been hard on this game at times and I'm going to be so again, but I should mention that I've really had fun playing King's Quest V - I don't think that enjoyment has come out enough in my posts so I thought it worth bringing up now.

I ended the last post with a request for assistance, and Andy_Panthro valiantly came to my rescue.

As I read his clues one by one I became increasingly annoyed with the game. I needed to use all of the clues to solve the puzzle, and even then it was difficult. The final hint was...
Well, I'd already tried looking for hiding places all throughout the castle after reading earlier hints, including the library, but now knowing this was the correct answer I tried again. I waited in the library for a while. Nothing was happening. Perhaps my dosbox cycles were too high. Perhaps the game doesn't play well with modern processors. Perhaps I hadn't found the elusive 'right place'. I kept waiting. Eventually (2 minutes and 30 seconds later) Mordack appeared in the bedroom and took a power nap.

Now, two and a half minutes doesn't sound like much. But when sitting in a room in a game waiting for something it seems forever. Even when I was sure it was the right thing to do because Andy_Panthro told me so, I still didn't think I was doing it right. The game gives no indication at all that Mordack ever sleeps while I'm in his castle. There is no indication in the library that anything there is a hiding place. The closest you get to a clue is when you look at the doorway of the library and the narrator says, “Graham can see into Mordack's bedroom through the open doorway.” I can see how in hindsight some might classify this as a clue, but the narrator will generally tell you what's on the other side of any door or opening when you 'look' at it so this isn't unusual.

It seems that just waiting in the library for 2 minutes or so is all that's needed. In trying different things, I noticed that it took different times for Mordack to appear – I suspect that each time I looked at an item in the room it paused the 'Mordack tiredness clock' which only starts when you enter the library and ends as soon as you leave. From my tests it seems to be a 1 minute 50 second wait if you don't take any action.

In an effort to discover more deaths, I tried standing directly in front of the doorway so Mordack can see me when he appears, but he didn't notice me at all. I also tried going further into the room so the 'eye' on top of the door could open and stare at me, but this still didn't change what happened. After he went to bed I also tried grabbing, talking to and walking up to the sleeping Mordack, but I couldn't get the evil wizard to wake up and kill me.

Seeing as the game didn't give me to option to kill him in his sleep, I took the wand he'd left next to his bed and left for the library. Having finally found the item I'd spent hours trying to get, I knew what I needed to do here. I put Mordack's wand on the left platform, Crispin's wand on the right and the mouldy cheese into the cauldron (did I miss a clue somewhere that told me the machine was powered by mould?)

The machine activated and this time Crispin's wand was charged. Mordack appeared, as did Cedric, who flew through an open window. Mordack used telekinesis to retrieve his wand and shot the owl in the suspicion that perhaps he was about to be useful for a change.

Mordack threw his wand on the ground in disgust ("Warning Mr Mordack. Wand abuse”) and showed his real power by turning into a giant flying insect.

I used my own wand and the images from Mordack's book appeared, letting me choose from them. Because I'd seen the screenshot a few times, I remembered the order they were in in the book so tried the first one, which looked like a tiger.

I turned into a tiger and faced off with the giant insect, which resulted in neither of us doing much of anything.

Unimpressed with the stalemate, Mordack turned himself into a dragon. I used the wand and chose the second picture, which looked like a bunny on a human face.

I turned into a bunny and quickly hopped away each time Mordack breathed fire at me.

Mordack then turned himself into a pooooiisonous snake. I used the wand and chose the third picture, which looked like a human shadow with a white rat superimposed over it.

I turned into a mongoose (okay, not a rat) and tackled Mordack.


He then turned himself into a ring of fire and surrounded me. I chose the obvious and used my wand to turn into the fourth picture which looked like either a butterfly or a chandelier.

I summoned a rain cloud above my head and the rain put Mordack out, thus ending his evil forever!

I had defeated the evil wizard and got a cutscene where the rest of the plot played out.


Beam us to Daventry, Mr LaForge

In the cutscene, Crispin appeared and told me everything I'd already heard from the gypsy back in the first act as if he was telling me news. Then he told me he knew how to fix my family and castle. He embiggened my family – my randy son promptly fell in love with Princess Cassima, who'd shown up to ensure I was going to save her as promised.

Graham for some reason told his family that Princess Cassima was solely responsible for their rescue, forgetting all the other people who had to play their part as well – why no love for King Antony or the Willow Bride or even the roc whose hunger gave me the locket I needed to gain Cassima's trust?

Crispin sent Cassima back to her home, then sent my castle back to where it belonged and was about to send me and my family back home when Graham suddenly remembered the probably-dead body of Cedric the Unhelpful. Crispin easily brought Cedric back from the brink of death, then sent the Royal family back to Daventry.

Of course, I couldn't leave the game without seeing what happens if I choose the wrong spell when fighting Mordack...

Dead ends found or suspected: 19
I found some dead ends, and suspect some more. Let me know in the comments if I've gotten any of these wrong or missed any...
I have a strange love/hate relationship with King's Quest V and have no idea how the PISSED rating will end up. I guess we'll all find out in a few days. But first...

Comparison between CD and Floppy versions
I thought I'd spend a little time examining some of the differences in the PC versions of the game.

Apart from the obvious difference between CD and Floppy versions of the game, being that the floppy version isn't voiced, I noticed some other slight differences

The floppy version has extra icons, notably two walk icons. The leftmost icon has Graham's walking controlled in the same way as previous Sierra games - when you click, he'll travel in a straight line towards your cursor but stops as soon as he hits an obstacle. The other unfamiliar icons are save and stop which are sensibly contained in the options window in the CD version. Also the screen cursors for all the icons are a simple white in the floppy version rather than coloured in the CD version. 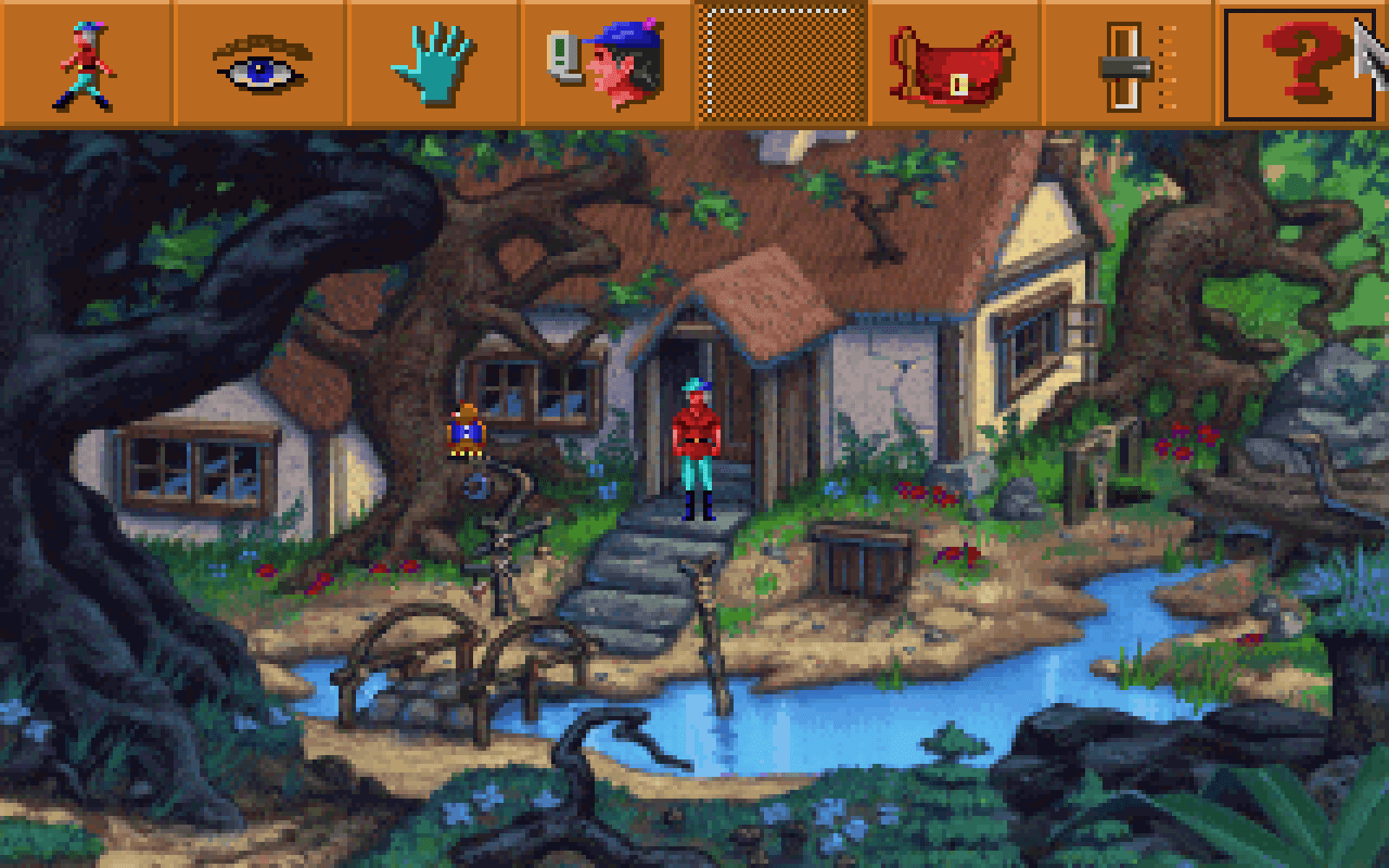 Strangely, the character portraits show more detail in the floppy version, and in the case of Queen Beetrice at least, more animation - as she waves her staff slightly and moves her arm and antennae. The CD version has water sound effects and a bear growl as well as voiced dialogue. 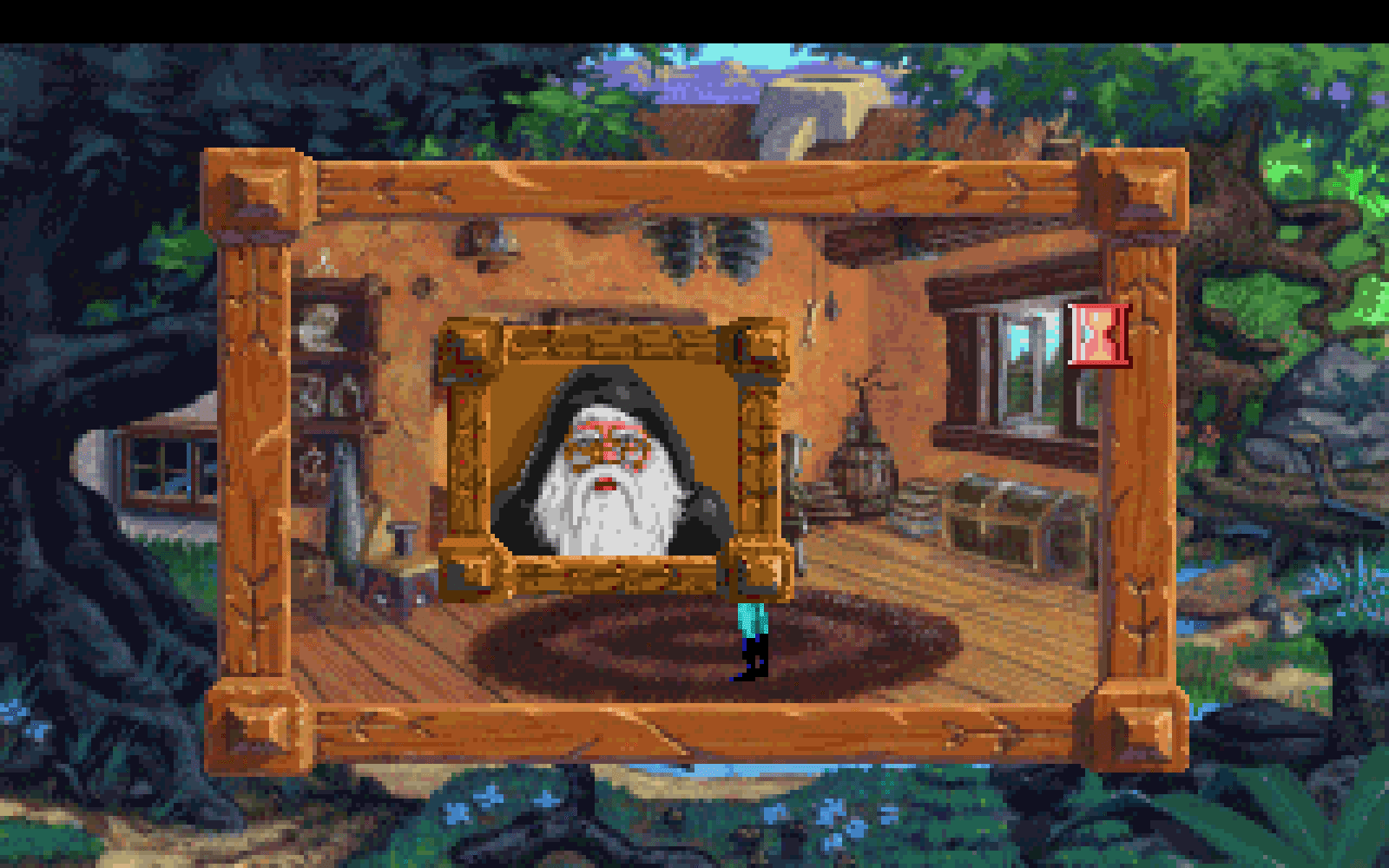 Nice wings you have there, dear

One other thing I noticed was that time stops when the voiced dialogue kicks in. This makes one particular puzzle much harder in the floppy version - the scene outside the bakery with the cat chasing a rat - in the CD version, the narrator tells you about the cat chasing the rat before they show up, giving you some time to react. In the floppy version it all happens much faster, making it almost impossible to do anything before the cat's killed the rat and you're stuck in a dead-end.

As for which version is better, that would be different for people's own subjective tastes - I personally like the extra immersion I get from voiced dialogue and can cope with the poor voice acting. I'm a little disappointed about the missing animations and character portrait detail but the voices, sound effects and user interface improvements more than make up for it for me.
Posted by TBD at 23:55