Ageless, Faceless, Gender-Neutral, Human Adventure Person's Journal #3: “This city is not the place for me! It feels like every way I turn, I get shot at! Thankfully, I have a pretty good memory, so I haven't had any trouble making sure I'll be able to live out my ten days on this rock before it goes up in flames through the Bizzy game. I'm still nowhere closer to finding Crisa Kortakis, my leads are all running dry and the most notable thing is that I've gone from a weapon I can hide to a full-blown forcefield and the most powerful gun I can lay my hands on. Every time I set my way out into the city, I find a new path to get lost down – and a new angry Stickrob, Robokiller or Glockmup shooting at me. I haven't done anything wrong! Though I could have sworn one of them was actually Merigo.. Must have been a mirage, right? Well, back to pretending to be a beat cop..”


B.A.T. is proving itself to be ever so typically.. French. I think I managed to get through about a single line of dialogue that I hadn't received prior to now in my continued exploration of the town of Terrapolis.. in the two hours I spent trying to find something (anything!) to do in my time playing this game. It's just so bloody inconsistent. I had to restart DosBOX because it wouldn't let me out of the hibernation chamber (the most convenient way to test out different times to see if different people are around) around about four times, so I was convinced that the ONLY WAY OUT wasn't working for some reason. I am seriously not liking this! There are a few interesting things here and there – and I have managed to find a few extra new areas to go through, so that's something – but there's no real excuse to have exits and entrances be so incredibly difficult to spot. The navigation doesn't even make much of any sense! To find the police station, for instance, you go to the doctor's surgery, which can be found in the (northwestish quadrant) of the gunsmith's screen (which you return to via the east/northeast pointing arrow.) You then go south. And south again. When you reach this screen? North! So when you think you're doubling back? You're not..

So after getting the piece of tape covered in cat hair to pretend I have a moustache The revelation that completely random arrows could pop up out of nowhere a la Leisure Suit Larry 3's lawyers in a manner that I only discovered due to scanning over the entire screen with my cursor, I managed to find one more thing that the manual had alluded to that I knew would be of some assistance – a mirror to escape to Wonderland a forcefield generator for combats for the low, low price of 400 Krells. I'm kinda skipping ahead here, though, as I didn't get a screenshot of the real curio of this post – Merigo! He turned up in the Hot Quarter outside the Bizzy Game arcade in a combat that I had one second to prepare for – he killed me nigh-on instantly. I reloaded, came back through, and at 1:30 PM exactly, he showed up again - and I again died before I even got to select my weapon. This just means that I need to use B.O.B. to be 'accelerated' instead of 'normal', though. Quickly switching over in a third attempt, I've had no luck spotting him. (In preparation, I got enough through Bizzy to also afford the game's most powerful weapon, the Nova, because.. well, I value my wrists, and I've seen no real indication of an advantage to having weaker weapons aside from cheaper ammo. This is possibly going to be a fatal flaw, given I sold off my Hacker, my Moz and all of the ammo I had for either – if they stop me from walking around a club or whatever with a gigantic gun, there's not much I can do – the weight was too much to carry them both.)


So, here's the critical issue. I'm looking around for Merigo again – I figure I have the right idea given he turned up and shot me like a crazy person. Knowing roughly where to search for him, I'm trying to do so in the Hot Quarter – but all I seem to get attacked by now that I'm properly armed (in spite of making sure that it was both on the Monday that I arrived in-game and that it was the magical number of 1:30 PM) are Robokillers, which carry nothing on a use of the 'search' command on killing them (thanks again, Jan Larres) though in truth, most of the combats I've received items for have just been food. As much as I want to kill random Skunks for steak and chips? It just doesn't seem to make much sense to waste resources of any sort to fight, given that my last doctor's visit cost 180 Krells from one fight in spite of having the best weaponry and armour in the game, both of them equipped prior to the fight starting with a Robokiller. The fights may as well be identical to one another, though, given they all involve the same tactic of 'click like a crazy person after selecting weapons and armour'.


As far as the actual exploration side, I've found several areas that appear to be for random encounters (as in the picture from the police station, it all but says 'this is just here to make things seem more dangerous than they actually are'), I've wandered about in the hopes of finding different people at different times – but I have yet to find any permanently-placed people that change over time. (I hope I've explained what I mean here well enough to not need to go into this further. While you guys may have enjoyed yourselves throwing up dozens of bets in some other game – and it technically may have had the first Request for Assistance – I'm officially throwing out one here and now out of desperation. I'm obviously missing something either involving finding my way into Crisa Kortakis' club, finding Merigo as a permanent fixture to talk to and then take down or triggering his random fight (is that even supposed to be a thing?) I think I've fully scoured the town now, and have spent over an hour reloading in a desperate attempt to find something interactible.


As I feel I have been so overwhelmingly negative and distracted during this post I think I've paid my penance for Les Manley already I would like to at least show one glimmering light in the game's overwhelmingly lacklustre nature – B.O.B. has feelings, too! I have absolutely no idea why or when this happened, but when I was in the police station I found what seemed to be the desk clerk wasn't allowing me to speak to them – they were still in alien/gibberish/trying to tell Billy Blaze how to rebuild the parts to his rocket ship. It's not really a puzzle, though – I'd discovered what was going on back in the forcefield shop when I noticed an option that said 'computer test'. Expecting to have a short quiz on the history of the personal computer, I clicked it, being told that I was forced to spend 40 krells for an assessment – and the shopkeeper told me there was nothing wrong with it. I worked it out when I got the following screen:

So, I can at least say that I've solved one puzzle throughout this game (Two if I count 'go to the toilets to find my equipment'.) However, back to my request for assistance! I feel I've pretty much exhausted my ability to search through this town any longer. The random combats are enough to make the task completely monotonous, and the fact that almost every conversation is identical to the last is driving me thoroughly insane, making me want to do virtually anything else. However, I'm not giving up completely – I'm fairly confident that there's not an awful lot to this game in the first place, so all I really need is a start. It's up to you guys (well, up to Jan Larres) as to how much in the way of help I'll need. Obviously, if one of these will lead to the rest sequentially opening up, the first is all I'll probably need. Here's my list of issues:


Remember to code your hints/spoilers in ROT13, and start with a vague hint then get gradually more detailed if it's possible. If the solution is something mindbogglingly simple, though, feel free to just spoil away. I can only imagine that the timing system will have something to do with it, so I'm expecting something that isn't entirely ROT13-able (e.g. 'go to the old building at 10:30 AM on Tuesday and they'll open up' – well, I'm probably going to be able to work out what '10:30 NA' is just from a glance). 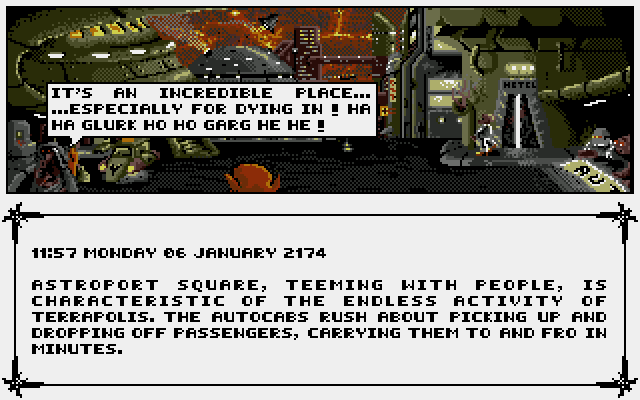 Note Regarding Spoilers and Companion Assist Points: There's a set of rules regarding spoilers and companion assist points. Please read it here before making any comments that could be considered a spoiler in any way. The short of it is that no points will be given for hints or spoilers given in advance of me requiring one. Please...try not to spoil any part of the game for me...unless I really obviously need the help...or I specifically request assistance. In this instance, I have made a request for assistance. Thanks!
Posted by TBD at 23:00