Game 52: King's Quest V - Time to Let the Cat Out of the Bag - Request for assistance!

King Graham of Daventry Journal entry #5: My boat's shipwrecked on Mordack's island and I've explored his castle as thoroughly as I can think of, but I've no way to defeat the fiend or rescue my family. I've defeated a blue creature with the power of teleportation and the talking cat, Manannan. I've met a princess that I've sworn to rescue after saving my own family but I'm still no closer to my goal. There must be a way. I need only to find it...


From the looks of our boat, our chances of going back the way we came are gone - I'm sure I could repair it if only I wasn't all out of beeswax. Unfortunately, I didn't seem to be able to salvage any parts from the shipwreck. There was a rotting blue fish near the shipwreck though so of course, I picked it up. It may sound like just a piece of trash, but last time I picked up a rotting fish I ended up with honeycomb, a stick, beeswax, some green gems, a golden needle, some fine shoes and so on, until I eventually made my way here - none of which would have happened if I didn't pick up the rotting fish.

With a rotting wet fish in my pocket, I climbed the stairs, where I found two large snake statues. As I got closer, the eyes glowed brighter. I went through expecting exactly what I got - death!

After a reload, I tried using my crystal shard on the snakes. It reflected the lightning back into the snake eyes and burned them out. Onward once again!

Moving forward, Cedric and I found the entrance to the castle, but because Mordack doesn't want to make it easy for his visitors, it was over a chasm. If I tried to cross I'd fall and die, so, despite Cedric's pleas that we turn back (turn back where, owl? Our boat is smashed to bits and we have nowhere else to go!) I went around to the side of the castle, where I found a grate. Again Cedric begged me to turn back - again I ignored him.

Prying up the grate with my metal rod and propping it up with the same, I dropped down into... a maze. Cedric had bravely offered to stay outside and be a lookout.

Once I go down, I can't do anything with the hole in the ceiling so it looks like I'm stuck down here in this labyrinth. This maze was hard to navigate at first but fairly easy to map once I got the hang of it. When I walk in any direction the next screen has me continuing to face that direction. I would have found it very difficult except I discovered accidentally (this is not the first time I discovered something important accidentally in this game) that if I clicked my 'look' icon on the blackness below the actual visible screen I got a compass - this makes no sense and I feel for anyone who didn't discover this trick.


Throughout the labyrinth creatures randomly walk on the walls, but I don't seem to be able to interact with them so I assume (hope?) they're just background atmosphere.


In one dead end I found a furry monster whose only words are "Dink" and whose name is Dink. When I got close to him, Dink killed me.

After a reload, I decided to try my rescued tambourine - I've had great luck so far playing music for animals. Dink loved the tambourine and ran off with it, dropping his hairpin as he left. I'm not certain but I think he recognised the tambourine and is off to return it to its rightful gypsy owner. I of course, rescued Dink's hairpin from the ground. I found nothing else of interest in the labyrinth apart from a door, which I could open with my new hairpin.

Now out of the only slightly annoying labyrinth, I took a bag of peas from a cupboard, then went to the next room to see a beautiful servant girl. I knew she was beautiful because the narrator points out that "though wearing rags her beauty nevertheless shines through"

When I try to talk to her she shies away. Knowing that all women value jewellery over their own safety, I give her the locket I found in the roc's nest. I'm rewarded with a cutscene.

Her name is Princess Cassima and she's from the Kingdom of the Green Isles. Mordack wanted to marry her but when she refused he kidnapped her and told her she'd remain a scullery girl until she agreed to marriage.

Now that Graham knew she was royalty, he promised to save her as soon as he rescues his own royal family.

There seemed to be nothing else to do on this screen so I went east where I found a large organ.


Guessing that it probably wasn't a good idea, I attempted to play the organ. When I got close to it, it started playing music by itself. Surprised to still be alive, I went east to the dining room, where Mordack promptly killed me.

Deciding against drawing attention to my presence, I decided not to play the organ the second time. Instead of Mordack, a weird blue monster captured me and created some kind of portal to a dungeon, throwing me inside.


As soon as I entered the dungeon I saw a mouse go into a mouse hole - so I stole his mouldy cheese with my fish hook (Graham doesn't care about the quality of the items he steals, he just wants everything that isn't his.)

After a short while a rock in the dungeon wall moved. Princess Cassima was pushing aside the heavy brick and had come to rescue me.


She mentioned that she comes down into the labyrinth often and I should go with her. I followed her and she led me back out to the labyrinth's exit. With my trusty map, I could have navigated my own way out, but following her was easier.

I reloaded and this time used the fish hook on the cheese before she showed up.

Back in the castle, I went upstairs to find Mordack's bedroom. I found the cat there, but gave him a rotting fish to keep him busy and moved on to the library. In there I read a book that had some strange pictures and symbols on them. Graham wouldn't take the book, but memorized the symbols and, according to the narrator, they might be useful later. 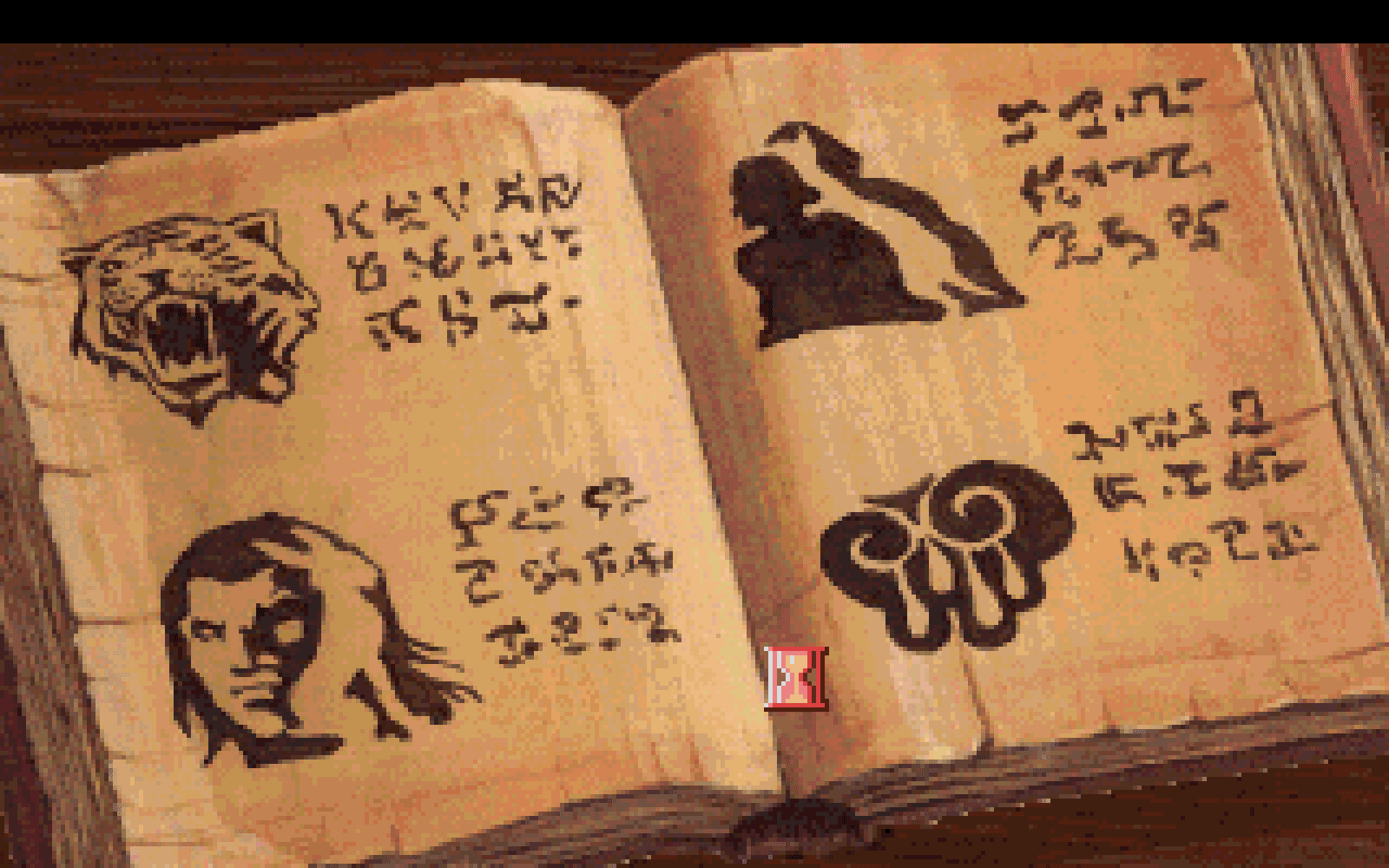 Who needs to memorize when I have dosbox's screenshot capability

I also entered the laboratory, where I found my captured family - but couldn't help them. I also found a strange machine.


I may be dead, but you have mouldy cheese in your cauldron - good luck getting over your fungal infection!

And... now I'm stuck. I'm pretty sure I'm missing the correct item to put on the left platform of the machine - I assume I need some kind of magical power source to power Crispin's wand that's been useless for the entire game.

The two things I clearly need to do are rescue my family and kill Mordack - one likely needs to be done before the other and the machine probably helps me do one or both of them.

Both the blue monster and the cat appear randomly but can usually be avoided by either reloading and entering the room again so they randomly don't appear, or immediately leaving the way I came.

I've played for a few hours since I was first stuck and discovered some other things by reloading to various points, but nothing that's actually helped me progress.

REQUEST FOR ASSISTANCE
So once again my lack of adventure game prowess results in me asking for assistance. I'm hoping this is one of Laukku's bets so at least my being stuck will help somebody earn some CAPs. I can think of  a number of likely reasons I'm stuck - I may be wrong but the things I can think of are...
Remember to code your hints/spoilers in ROT13, and start with a vague hint then get gradually more detailed.

Session deaths: 5
Total deaths: 35
(I haven't been counting any falling deaths that don't give either new animations or dialogue)

Note Regarding Spoilers and Companion Assist Points: There's a set of rules regarding spoilers and companion assist points. Please read it here before making any comments that could be considered a spoiler in any way. The short of it is that no points will be given for hints or spoilers given in advance of me requiring one. Please...try not to spoil any part of the game for me...unless I really obviously need the help...or I specifically request assistance. In this instance, I have made a request for assistance. Thanks!
Posted by TBD at 23:00