Missed Classic 6: Wonderland - Part The First – In Which Alice Stumbles Blindly, As Is Her Wont

'What a strange day today has been!', Alice declared. 'I had only thought to follow that strange white rabbit, and now I am stuck in some other world, of marmalade jars and pear lanterns!'

The Reviewer tutted. 'Oh, Alice, what a terrible memory you have! The pears were in your world, so is this world so strange?'

Alice frowned. 'You may have a point, but I am entirely uncertain what it is.'

The Reviewer smiled, and took another puff of his hookah 'As it should be.'

This first section is mostly to do with what exploration we can do before we get to Wonderland, and to highlight the design of this first, introductory segment of the game. Be warned, I'll be copy pasting some of the text, to give you an idea of the writing here. Let's start with our somewhat wordy introduction. There is a splash screen (Based on the box art), and a short musical sting, but apart from that, I haven't yet heard any sound or music. Considering this was the first port of the game to the Magnetic Scrolls engine, I'm pretty sure that's almost all we get.

Alice was beginning to get very tired of sitting by her sister on the bank, and having nothing to do. It would have been bad enough having to watch Emily read her book all afternoon without the additional bother of trying to stay awake in this terrible heat.

Anyway, what kind of book has no pictures or conversation, you wonder to yourself. All of your books are far more interesting, being crammed full of pictures and conversation, which is just as well,really, as there's never enough room left for boring old words.

Why couldn't Dinah have come with us today, you wonder drowsily to yourself. She's far more fun than Emily even though she's only a cat. Anyway, Emily's too old and sensible to be any fun.

Why is it, you muse, that cats while away the entire winter sitting by the fire and yet guard their chosen spot of shade with an equal degree of ferocious fanaticism in mid-summer? Strange animals, cats.

My my, we are a little... BRAT. Still, there's nothing amazing going on, let's try and raise hell! We begin on a riverbank, also next to our sister, Emily, who, in the grand traditions of Victorian upbringing, is completely ignoring us. Funny, that. We've got no obvious goals right now (Although I have a feeling we'll be seeing a White Rabbit sooner or later) , so we try some things... 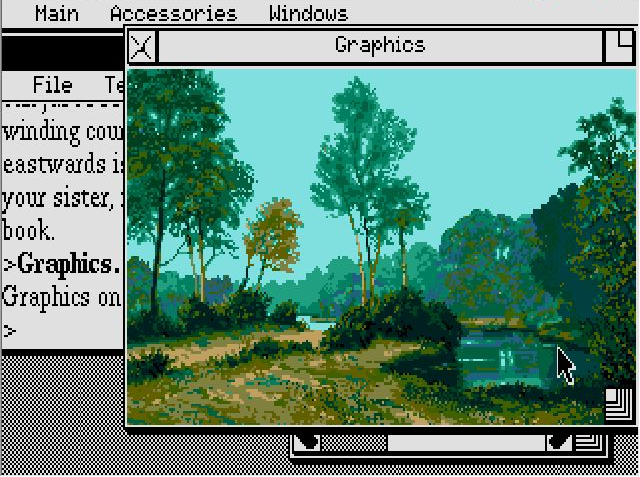 We can't hit Emily, because we're sanctimoniously told: “Now, you'll only turn people against you if you do things like that and quite frankly you need all the help you can get.” Okay, I'd already figured this wasn't a violent game. Sleeping just acts like waiting, except it says “Zzzzz...” instead of the good old “Time passes.” … Emily won't let us read the book, or take our clothes off for a swim, and, come to think of it... We can't swim. Southwest of us is a lane, Emily's not stopping us from going anywhere, so let's go there...

There is nothing interesting beyond the description and graphics here. Wow, this is pretty empty. Okay, fine, West to the Field.

Again, nothing, because there's a bramble hedge. But, just on a hunch, let's wait... Five actions later, the rabbit appears. The next, he's past us and into the hole.

...Wait, what hole? I get the distinct feeling we aren't getting the whole story. I also get the feeling we have timed events going on... Well, sod it, let's follow him... Whereupon we smack our head on the roof of the rabbit hole (Because it's dark), get woken up by a beech nut dropping on our head from the tree (Because we were dreaming, didn't you read Wonderland?), and we get treated to a witch-hazel flavoured game over. Confirmed, this game has deaths. Although it does warn us that we shouldn't go any further, so it's an avoidable one, in this case.

Let's start again, and this time, let's try the other way. Before we do, however, the map so far. The missing portions are the dark rabbit hole (West), a country lane that not only seems to extend endlessly, it does extend endlessly (South), and a Pear Grove (East). 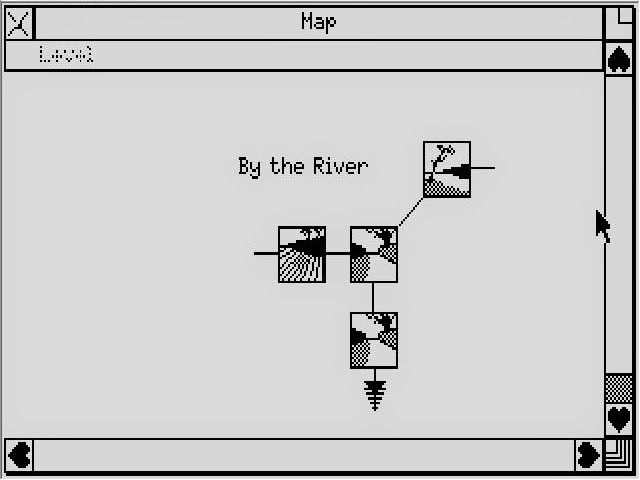 Okay, fine, this time we'll go east first. And I'll gif this, because it's important to see how big of a spoiler the graphics can sometimes be. If you come into this room in the first turn... It's just pears. But the gif will play once every time you enter the room. Whoops. Either way, there's only one pear-lantern we can get, and we can either pick it up now (And it miraculously turns into a lantern), or we can wait until it changes.

On the fifth turn, two things happen at the same time: The rabbit turns up, complaining about how savagely he's going to get treated by the Duchess for being late, and the pears turn into lanterns. We know where the rabbit's going, we know what he looks like, so we might as well pick up the pear. Which is a lantern. Which already hurts my brain. And nets us a whole 4 points. Out of what turns out to be...

So there's another thing confirmed: We're playing an old adventure game (with all that implies)... And it's using dream rules as well. This... Doesn't bode well. Oh well, time to catch the rabbit!

Entering the rabbit hole, we find that the thing that caused our first game over was... The tunnel tightening up a bit. Also a sharp bend that means we turn south now to follow thaAAAAAHHHHHHhhhhhhhhh...

I fell into a rather long tunnel, with busts, and owls, and windows... All manner of things! I wish I could have saved a screenshot that does it justice, because it's actually a long, looping animation, pretty smooth too... But GIF capture has its limits, and every attempt at capturing it has led to failure.

Right, falling past all manner of things, I know this from the Disney movie. I don't remember seeing a marmalade jar mid fall, however, so, just to be safe, I grab it before we fall onto some soft leaves. Better safe than sorry, after all...

So, after the first twenty minutes of playing, saving, loading and writing, we've found ourselves in Wonderland, and... Already there's death. No need for help yet, folks, but before I head off, let's take a look at the hints, and how it impacts our score...

You have used the Help facility 3 times. No score change, and our first puzzle solution can be potentially missed on your first try, or even your second. If you're impetuous.

Alice is carrying a jar, wearing shoes, and a white dress. We have 4 points, and the game is already looking pretty arbitrary, just as I remember! (Things will hurry up from this point on)

Time played: 20 minutes (Would have been 30 if I hadn't played this part before)
Posted by Ilmari Jauhiainen at 23:00