Jake Spenser Journal Entry #5 "Elvira keeps insisting in her abilities as a cook. I hope she turns out better than the old one. As we don’t have anything better to do other than getting some keys, killing her grand grand grand grandmother and saving the world, I give it a try. I don’t know what she gave me, but with just a bit of honey and hay she made me see things. Things no man should know. Like the names of every single plant in the garden. It must also have boosted my courage, a side effect?, as I was able to tackle the werewolf, the gatekeeper and go down to the castle catacombs. It’s important not to mix them with the dungeons. The dungeons are grey, while the catacombs are blue. And my mind is blank."

And now, for the first time since forever, the incredible, the magnificent, the “not-very-adept-at-this-game” Deimar!!! (booing). Performing his legendary act!! (more booing). THE TRANSFORMATION OF HONEY AND HAY INTO SOMETHING A TAD MORE USEFUL!!! (tomatoes being thrown)

The magic system in this game is not very complex. Elvira is the one actually doing most of the work while we only act as kitchen help. Whenever she is in the kitchen with the spellbook we can select her and the “mix” option will light up on the menu. If we select it, a close up of the book comes up showing the list of spells. We can then select any spell and a new page will be open with a blank page on the left and the ingredients we are carrying on the right. Although in my screenshots you won’t see it because I prefer to use the ingredients directly from the floor. That’s the way I roll. Dangerously ignoring the five-second rule.

The list of ingredients for each spell is part of the copy protection system. The spells come described in a small book accompanying the manual, needing a pair of those funny colored glasses to read them. Or it did until someone actually bothered to transcribe the book. God bless people with too much spare time!. In any case, at the moment we are just going to mix one spell that needs the hay from outside the stable and a jar of honey from the kitchen. Herbal Honey. This spell allows us to “gain knowledge of the true names of all plants”. A.K.A. it’s time for some gardening.

After fighting my way through some blue soldiers and monks I got to the garden. Like the spells at the beginning of the game, this one presents itself as a green bottle. One sip and some carrying later and I was back at the kitchen with the floor totally covered in fruits, leaves, roots and any other form of green. However, I was still missing some key ingredients like thistle or nettle to make the other key spell. I suspect that there is the exact amount of ingredients in the game to allow you to craft every spell once, but since some spells share ingredients and not being able to make some of them is a sure way to get to a dead end, I opted to stop making spells and continue exploring.

And so I took the crucible from the forge, the silver cross from the gardener and a pair of kitchen mittens and proceeded to mercy kill a rabid dog. With the help of the mittens we can manage the crucible once we put it into the forge. Then, we can melt the silver cross and dip one of our bolts. Voilà, a silver tipped bolt. I really hope this is what the werewolf meant because if he was referring to any other silver tipped thing he is in for a nasty surprise.

Such a waste of time. No key, no incredible treasure… The only thing I found there was a bit of horsehair. I was so mad I decided I had to let out my rage. Hence the only sensible thing was to pay a visit to the only other being who had mocked me and didn’t have a good pair of…shoes. The gatekeeper. As I didn’t have any interest in a fair fight, I simply used all of my fire dagger spells to kill him. Well deserved if I may. He was such a poser, reading a blank book. At least I got the “Primus” (first) key, which was hidden behind a notice on the board behind him. The note was a warning to the soldiers about not removing a crown. Useful advice if I ever see a crown, were I not the kind of guy who has a problem with authority figures.

I went back to the kitchen, dropped everything and mixed the Alphabet Soup spell using some dandelyons, elderberries and rose petals. The spell is “essential before understanding of runes can be gained”. Basically, there was an inscription at the entrance of the main keep which I couldn’t read and this spell helps with that. The message is “Beware thy very soul lest it exist without flesh or bone”. Useful for pretending being cool at parties, but I don’t see how can it help us with our current predicament.

With nowhere to go now, I decided to start exploring the castle towers. Starting with the northwest one, with its complimentary green soldier. These guys are starting to look like the Power Rangers to me. Inside I was surprised to find that I could go up and down. Guessing that up meant the castle walls, I decided to see what lied in the tower basement. After a short animation of our character going down some spiral stairs, I reached the castle catacombs.

Another new zone, another new tune. This one a bit similar to the dungeons one, slow and tense. The catacombs are very… blue. Nothing fancy, just plain rock and darkness. Suddenly I remembered that you can put the soul of the torturer to rest here, so I ran back to the kitchen to take his bones and a shovel. Grave robbing ahoy!!

Navigating the catacombs is problematic. There are places where the turn arrows don’t just turn, but also move the character one square which is the reason my maps may not be very exact. I blame the graphics, and you can’t prove it’s just my bad orientation skills so I am right. In each hall there is a crypt. As happened in the dungeons, all the crypts are the same. First an elaborate door with two weird statues holding a skull. And inside you get two sarcophagi with bones.

However, unlike the dungeons, these crypts are mostly empty. There is one that contains dragons blood inside the skull over the door. Seems a little unfair hiding an object inside an item that in the other occasions can’t be interacted with, but what do I know. Watching my footage from the session, I see I also missed something in the floor of one of the corridors. In any case, the only other crypt with something of interest has an empty sarcophagus and another one not so empty. I tried putting the torturer bones in the empty sarcophagus but I didn’t get any message so I don’t know if that worked. Specially because opening the other sarcophagus in the room kills you, so I didn’t try to leave the remains and go back to the torture chamber.

I left the best for the end. The enemies. Right after you go down to the catacombs, some skulls come flying at you. They are quite easy to dispatch, as they die in one hit. The only caveat is that you have to time your attack with theirs and attack the same side they are attacking. Soon after, you get to meet their flesh puppets… or something. It is better if you just see the picture, I can’t write any description worthy of such a magnificent monster. You kill them by cutting their arm, whose hand converts then into one of the flying skulls.

And the final interesting thing here is a giant troll that kills you on sight. There is a specific crypt I have not been able to explore because whenever you get near its entrance, this bugger comes and stones you to death. Old testament style. The rock he uses seems to have something written on it, and the game warns you about needing the right weapon to kill him, so it’s a dead end at the moment. 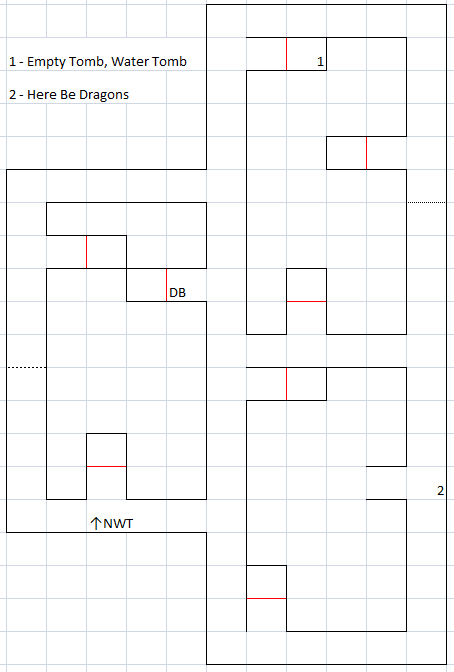