And here we are, deciding the fate of Elvira. Elvira is a strange beast. It tries to be a RPG-graphic adventure hybrid but it seems to me the developers didn’t dare to venture far into any of those genres. Unlike Quest for Glory, the reference hybrid, Elvira doesn’t take too much advantage of its RPG elements. They are there mostly for the combat, and it’s not very exciting, although it doesn’t get in the way (unless you are me and enjoy being beat to a pulp). And the puzzles are not that difficult or creative and there is no NPC interaction to spice the dull moments. However, and even though my last hour and a half of pixel hunting almost drove me mad (or at least quite bored), I will say that Elvira is a good game. Certainly there are better games, but it is quite enjoyable. So let’s see how it fares in the PISSED scale.

Elvira is at its core an adventure game. The proof is that there are almost no big enemies in the game that can be beaten by pure strength. And I have to say most of them make sense, in a “I hope you’ve done your homework about terror tropes” way, or there are hints about to solve them. For example, the werewolf just plain tells you how to kill him. The vampiress is dealt with in the typical horror manner. The salt gives you a straight hint about what it is used for and so do the torturer’s bones and the crusader’s sword. And I really like the idea of using spells to solve puzzles a la Loom, Spellcasting or QfG, even though is not really explored.

However, there are some puzzles that are solved through tedious pixel hunting. Finding the key in the stables or the torturer’s bones for example. Or the knight’s corpse. I don’t even know if I should call that a puzzle or simply busywork. Putting Elvira’s ring in the chapel's cross is almost a lucky guess, as nothing makes reference to the ring’s shape. Not even its picture. Fortunately, those are limited occurrences.

I’m a bit conflicted about this one. On one hand, the inventory is quite functional. It could be better. For example, I would like to know what armor I’m wearing or what weapon I’m wielding. Each item has a distinct icon that greatly helps to identify one from another, which is also very helpful. However, there is not a lot you can do with your items. Descriptions are quite short in most cases. Sometimes it is even repeating the name of the item, making the “examine” button not that useful. Another issue is that you can’t combine items apart from using them as a container. For example, to make the silver tipped bolt you have to take the crucible, put the silver cross inside, leave the crucible in the room (which automatically places it in the forge) and put a bolt inside the crucible. It is not impossible but not exactly intuitive either. This mechanic is even more patent when the game makes you use items together without you knowing it. For example, you can’t use the stake on the vampiress until you have the sledgehammer. Or you can’t take the crucible from the forge until you have taken the kitchen mittens or take the burning coal without the tongs. You don’t need to use them, just having them in your inventory works. And there is no message telling you why you can take them now. And don’t make me speak about the iron rings that can be “taken” but have no verb associated and don’t appear in the game room inventory.

Let’s not forget the combat interface. I don’t have too much to say about it to be honest. It is simply functional. It is not very engaging and it is too fast for my taste, but it is functional.

The game’s story starts and ends with the manual. There is no story to this game, it’s just a gigantic fetch quest. A funny one, but a fetch quest. Nobody is gonna play Elvira for the story, it is an exploration focused game. The setting is also a bit lackluster. The manual says that EIvira is trying to transform the castle into a bed and breakfast. There is a bar in the main keep, there are rooms being refurbished, the two “museum” rooms (the one at the castle’s gate and the armory) some modern things lying around... And that’s about it. Limited to the main keep and the castle entrance. I think the developers could have included some items tied to the story or some more rooms with modern details, because as it is, you can forget the story is set in modern times and think you are playing a sword and sorcery game.

Music. Music never changes. Or at least only changes about 4 times in the whole game. Taking in account it took me nearly eight hours to complete the game you could say I kind of grew tired of it. It is nice and helps a lot with setting an oppressive atmosphere. It’s the same with sound effects. The only ones you will hear during the whole game are the combat sounds, which are always the same regardless of the enemy. I am still baffled that the Hamlet creature from the lagoon screams. And so do the skeletons. It gets repetitive. I know, I know. It is so because of the limited storage space. But in the end you've spent the whole game listening to the same sounds and music.

But it is all for the benefit of Mr. Graphics. Man, this game is gorgeous. You can take screenshots from Elvira and compare them to any of the other 1990 games and see that this game is superior in this aspect. The amount of detail in each screen, the close ups, the animations, the funny death scenes... It is all very well crafted. And even considering they also get repetitive (you get to see all varieties of grey walls and there aren’t that many) it is still a marvel to watch.

By the way, take a look at the far superior Amiga version which even has digitized speech. Take into account that the music is also different from the DOS version.

This is where the graphics, the music and the overall tone of the game really come together. The game really feels like being inside a bad monster movie. Getting inside the garden is peaceful and bright, and the monsters are probably the less dangerous ones, although they are the most obnoxious. The dungeons and the catacombs are dangerous and tense. But while in the dungeons you get the skeletons and a serious threat, in the catacombs there are the… things, directly taken from monster movies. The underwater scene, where the only music is your heartbeat is very stressing, even when you are in the moat above water. I think it works really well. My praise for the designers in this aspect is they managed to capture the essence of the Elvira premise. If I have one but, it is that I think the game takes itself too seriously whenever Elvira is not in the screen.

Speaking of which. I don’t think the game should be punished by this decision but allow me to rant for a little. Why is Elvira relegated to such a small role? She is the titular and only known character, she has a personality more or less well developed by her TV program and the movies... Why would you throw all of that away? I’m pretty sure if any Elvira fan played this game only for Elvira, they would have felt disappointed. It feels like they got the license and threw Elvira into the first game they had that somehow fitted the premise.

Regarding dialogue and acting, well, the acting is mostly fine I guess. The little there is, because there are only two speaking characters in the whole game - Elvira and the gatekeeper. There is no option to interact with any NPC other than killing them. Or make them mix spells for you. This is getting a very low score as you could guess.

So let’s see. 7+4+3+7+8+2 divided by 0.6 is 52. I’m going to add one discretionary point for the deaths, getting the final score of 53. I think that’s fine taking into account it is a graphic adventure with no dialogues and no story beyond “save the princess, save the world”. The CRPGAddict said that as a RPG he didn’t like it, but it was a decent adventure game. And I wholeheartedly agree. That means Fry takes the prize with his 51. Congratulations!! 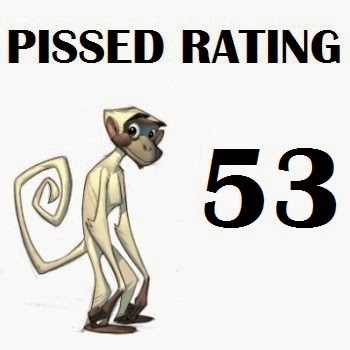