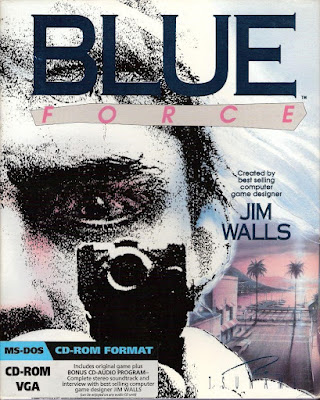 The email was innocent enough. Subject: “Blue Force and Larry 6.” Sender: The Adventure Gamer The Adventurers Guild’s very own Ilmari Jauhiainen. The message: “Hi Alex! I hope you are doing well. I just noticed that Blue Force - the last Jim Walls made adventure game - is coming up and there’s your name written on it. Do you think you can take up the challenge? Also, Larry 6, another game with your name on it, is coming up pretty soon after Blue Force. Do you think you can do two games so close to one another? All the best, Ilmari.”

My mind raced. Here I was, two years older and wiser . . . well, older, than the last time I played a game for this illustrious blog. Of course I wanted to do another one. Another two, in fact, but little did I know/remember I had already agreed to play these two. Apparently, I am a leading expert on games made by Jim Walls and Al Lowe.

Sweat began to coat my fevered brow. My heart skipped a beat, and then another! I debated calling a doctor, but then remembered that this is just a dramatic retelling and not real life. So gamely, I screwed my courage to the sticking place and sent a terse, very ominous, and very age-appropriate (I’m 41) reply:

“What’s up man?”There was more, of course, but the details are quite inconsequential. What matters is that I took on this heavy burden of playing Blue Force for you, The Adventurers Guild reader, mainly so you don’t have to.

This will be my third game designed by the leading lothario of law-enforcement, Mr. Jim Walls, former California Highway Patrolman and game designer for Sierra On-Line. The other two Jim Walls productions I have played for this blog were the VGA remake of Police Quest 1: In Pursuit of the Death Angel and Police Quest 3: The Kindred, which I still have nightmares about.

Yeah, let’s just say I’m looking forward to Larry 6 far more than I am this one. Generally, when it comes to playing Jim Walls’s games, I feel a lot like Larry . . .But how bad can it be, right?

Blue Force was created by Tsunami Media, Inc., a game company founded in 1991 by some disgruntled former employees of Sierra On-Line (all of the gruntled ones stayed). Former Sierra Chief Financial Officer Edmond Heinbockel started Tsunami in 1991 and—here comes a tangent!—boy, did Mr. Heinbockel get out of Sierra while the going was good. Have you read Sierra founder Ken Williams’s book Not All Fairy Tales Have Happy Endings: The Rise and Fall of Sierra On-Line, published in 2020? It’s great, and it details the kind of financial shenanigans that did Sierra in in the late 1990s. Fraud, deceit, overreach . . . it’s really interesting stuff that would make a great movie a la Margin Call or The Wolf of Wall Street. I highly recommend you check it out if you’re into the history of Sierra and computer gaming generally. Did you know that Ken Williams turned down the opportunity to buy id Software (the makers of a little game you might have heard of called Doom) and declined the chance to go into business with a short, bald guy who runs the world and a major American newspaper named Jeff Bezos? He also basically invented multiplayer gaming as we know it via this new thing called the Internet before the technology was available. No fooling!

Anyway, Tsunami created a number of games. According to MobyGames, these include the following:
Man Enough sounds like the title of a Larry game, doesn’t it? Come to think of it, so does Silent Steel. Heck, even Flash Traffic does. Maybe even Wacky Funsters!

In Blue Force, the player takes control of rookie cop Jake Ryan, whose father was killed in the line of duty. From the back of the box:

Attending Officer’s Comments:
Thursday, June 14, 1983. At approximately 10:00 P.M., Lieutenant John Ryan and his wife were brutally murdered in their home. Both victims were pronounced dead at the scene, having suffered multiple gunshot wounds. There are no suspects at this time. The Ryans are survived by their only son, Jake.

NOW IT’S YOUR TURN . . .
You are Jake Ryan, rookie motorcycle cop. Ten years have passed since the unsolved murder of your parents, but threads of evidence still exist. Teamed with your father’s partner, you begin to weave the all but forgotten strands together. As your past comes into focus, the line between justice and vengeance begins to blur. Will the truth force you over the line? 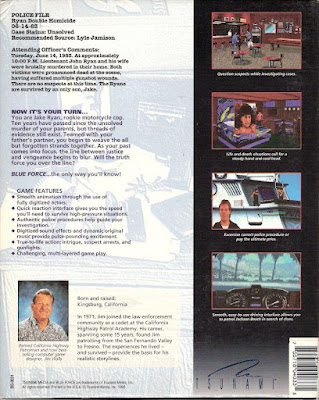 The box also advertises the following GAME FEATURES:
I’m not going to lie: “Authentic police procedures” has me a bit worried that this’ll be another Manual: The Game. Let’s hope I’m wrong!

The music was composed by Ken Allen, whose other credits include, among other things, Descent, Mixed-Up Mother Goose, Castle of Dr. Brain, Space Quest I: The Sarien Encounter (1990 remake), Space Quest IV: Roger Wilco and the Time Rippers, King’s Quest I: Quest for the Crown (1990 remake), King’s Quest V: Absence Makes the Heart Go Yonder, and The Colonel’s Bequest. Hey, I’ve played all of those! They have great music! What a pedigree! Mr. Allen also did a little voice acting. Here’s an interview with him from February of this year.

Unfortunately, Blue Force was not well-received. According to my sources (Wikipedia):

“Computer Gaming World‘s Charles Ardai in 1993 stated that Blue Force ”is simply not as strong as Walls’ previous games”. He criticized the game world (“prop-up facades”), “abysmal” dialogues, “appalling spelling errors and factual inconsistencies”, and slow speed. Ardai concluded that “Walls and Tsunami both have better work in them ... they have nowhere to go but up”.

The manual is interesting. It gives the multigenerational story of the Ryan family whose patriarch emigrated from Ireland many years ago, ended up in New England, and became a cop. We walk through the family history as they end up further and further west before the tale brings us to Jake Ryan’s father John in the town of Jackson Beach, presumably in California. Jake’s partner on the force, Lyle Jamison, never married. When John and Jackie were murdered in 1984, Lyle left the police to try and crack the case as a private investigator while Jake was raised by his grandmother, Frannie. I’m sure Lyle will be a character in this game, so I’m glad the story mentions him.

The rest of the manual just goes over the interface, which actually looks pretty much lifted from the standard Siarra point-and-click fare of the day, and then technical troubleshooting. The only sop to proper police procedure (the three Ps!) are the radio codes:
Enough reading. Reading is for nerds! Let’s play this game! Decades-old adventure games are for cool people! Let’s fire Blue Force up.We get a nice animated introduction using what looks to be motion-captured actors as the sprites. This looks to my eyes beyond what Sierra did in this era, which was basing the movements of the sprites on the actors, but adding enough pixelation to make them look like video game characters and not just digitized actors. Here, they look like digitized actors. See for yourself. 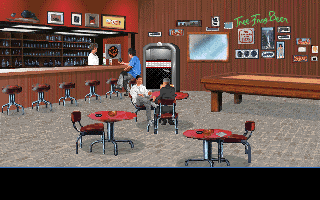 I’m not going to show every single picture, but the story begins on May 15, 1984 in this bar where two men look to be transacting some sort of deal. 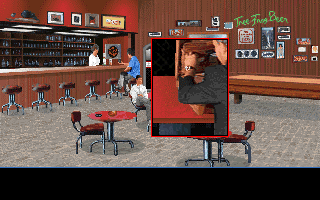 Money is exchanged for . . . something, and then the older man in the suit walks out right as two other men come in. They show badges to the white-shirted dude, who promptly splits the scene, hops on his motorcycle, and rides away.The chase leads the two officers through Jackson Beach. I don’t think having the car and motorbike leave one end of the static shot and then appear from another like in an old Warner Bros. cartoon where Bugs Bunny or whomever walks into a door on the left and pops out of one on the right, defying the laws of physics, was intentional, but it made me chuckle to see it. 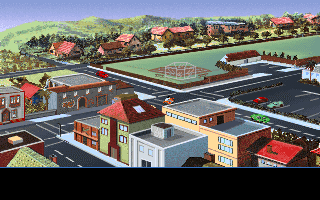 Anyway, the cops are stymied when motorcycle-man rides across a baseball field but they get caught in an intersection when a truck gets in their way.We then jump ahead three days where some guy, presumably mullet-man, goes into a house, presumably Jake’s, and straight-up murders John and Jackie Ryan.The murderer takes something from John’s desk. The next thing we see is the funeral, where the American flag draping John’s coffin is folded and given to young Jake. 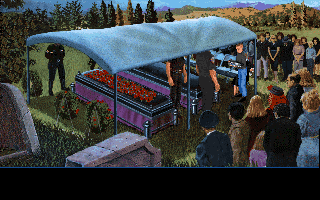 We jump ahead again, eleven years later. Jake Ryan has been accepted to the police academy, and we get action scenes that resolve into still shots, showing Jake’s journey through the police academy. Sadly, Mahoney, Hightower, Sweetchuck, and Jones aren’t in this game.

(Please tell me at least one of you gets that reference.) 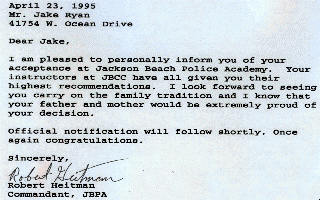 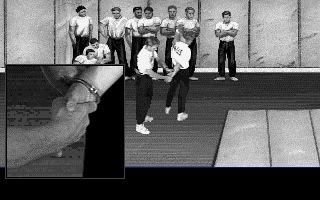 Finally, and you’ll be shocked to know, Jake graduates at the top of his class and I’m sorry just look at the guy: 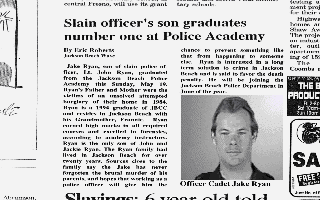 The game proper starts with Jake riding his sweet motorcycle to the station for his first day on the job. 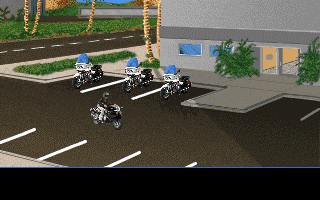 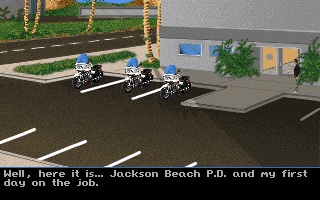 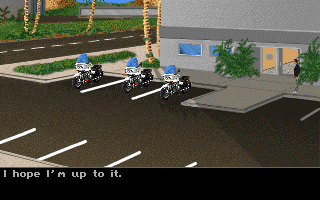 I hope you’re up to it too, Jake! Because my life depends on it.

Or was it the other way around?
Posted by Ilmari Jauhiainen at 23:00