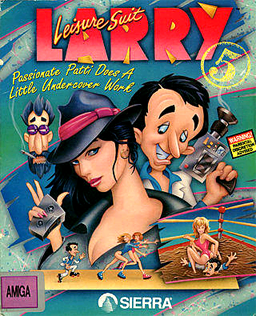 Let’s get the obvious out of the way first: This is really the fourth Larry game. I won’t do the hacky Internet writer thing and make some joke about the missing floppies or whatever; it’s been done to death and series creator and head designer Al Lowe tells the story much better than I ever could here. But since it turns out that I actually am a hacky Internet writer, here’s the condensed version: The ending of Larry 3 left our heroes, Larry and Patty, happily together and writing computer games for some fantastic company located in the California Rockies. In order to get out of this continuity-bind, Mr. Lowe, in a flash of genius, wondered why he had to make the games go in strict numerical order. Why not make the next Larry game the fifth one, begin in medias res, and refer to the events of the fourth game, hinting as to why Larry and Patty are not together developing really sweet adventure games? So it’s all just a part of the joke. That Al Lowe, making comedy games that are actually funny. Who does he think he is?


The above story is a lie, of course. We all know what really happened to Leisure Suit Larry 4: It corrupted the super-computer on the planet Xenon and allowed for the takeover of the entire planet by the dastardly Sludge Vohaul. Read Adventure Gamer contributor Joe Pranevich’s chronicles of the true story behind Larry 4 here.

Back to Larry 5. Released September 7, 1991, this was the first new point-and-click Larry, created from the ground-up with Sierra’s then-new interface in mind. A point-and-click remake of the first game came out in July of that same year; I covered it on this very site not too long ago.

This game has a thoroughly stupid plot, but what else would you expect? We begin with a pretty cool animated intro showing Larry plastering the missing number 5 onto a poster for the game. Patty then walks seductively by, causing Larry to stick his leg in a bucket of paste and end up getting his hand stuck to the poster. There’s got to be a sexual innuendo here, but I can’t for the life of me figure it out.

The graphics are in the cartoony style of the VGA Larry 1, and although I complained about how ugly the aesthetic was in that game, I already think it works better here. Probably because I’m not comparing to an EGA version. The animation isn’t the best that I’ve seen for games of this time, but it gets the job done. 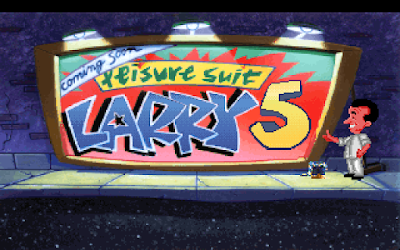 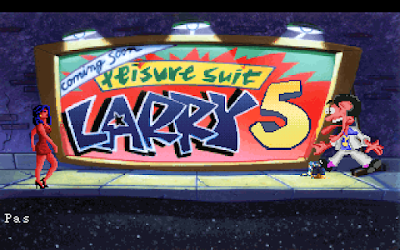 We then turn to an East Coast board meeting where some shady-looking businessmen are talking to a menacing figure we only see from the back: Only his eyebrows and his cigar are visible. They explain their business’s operations in pretty hilarious fashion:

This shadowy corporation has been involved with encouraging children to do drugs, which has caused drug sales to increase, leading one to believe that this company is involved in that particularly vile trade. These people are also involved in pornography, a business that has been showing “explosive growth” for 25 years, but has recently gone “flaccid,” resulting in “painfully declining penetration.” I will not post screenshots of these graphs, but let’s just say that they are rather phallic and juvenile, and therefore perfect.

In order to combat the declining pornography sales, which they blame on cable, they have been trying to insert pornographic lyrics into their rap music to encourage people to buy some X-rated films and get busy with the self-abuse. But to no avail. In an eerily prescient moment, one of these men describes a world in which people don’t need to actively seek out and purchase pornography, because they can get it for free in their own homes. Sounds familiar, right?

The action then shifts to a West Coast board meeting six months later, where the higher-ups at PornProd Corp. are discussing their plans to find a new host for their upcoming television show “America’s Sexiest Home Videos” (I told you this was a stupid plot). They need to find the “Sexiest Woman In America,” and they will call her “Vanna Black.”

This woman needs to be so ready, if you catch my drift, that she’d drop whatever she’s doing and bump uglies with anyone, no matter how dorky or how big of a loser. Does this sound like anybody we know?

See, Larry works for PornProd Corp. as some kind of low-level assistant. This scene acts as a little tutorial, with on-screen prompts telling the player how to click through the icons, recommending that they click on the coffee pot in the upper-left and read the game’s documentation if they haven’t done so already, a pretty cool way to get players used to the old parser-interface familiar with the new point-and-click system. Also, a rather high-quality digitized voice keeps screaming “COFFEE!” as Larry fumbles around.

And fumble around I do. Getting a drink of water from the cooler in the bottom of the screen inexplicably gives Larry 1 point, as does checking out the breast-shaped award in the lower right. Clicking the “hand” icon on the coffee (1 point) makes Larry pick up the pot and walk into the office to serve his boss, Silas Scruemall. Hilarity ensues. 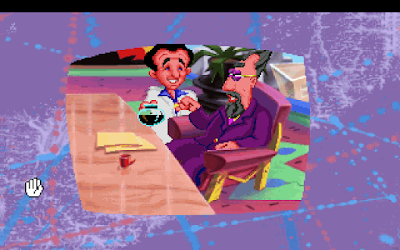 Well, it looks like the good folks at PornProd Corp. have found their loser to audition America’s sexiest woman!

They have received thousands of submission tapes, which Larry was already aware of, being the company’s Chief Tape Rewinder and Sterilizer (eew!) for the Vanna Black project. Larry needs to go and covertly “audition” the three finalists to see which one really fits the bill. These auditions must be blind, of course, because if the girls know they are going to get down on camera, it would invalidate the results—this is all very scientific, as you can see. So Silas gives Larry a secret camera to do his dirty deeds (1 point). 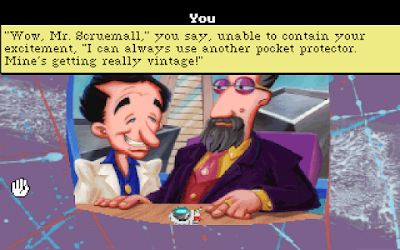 So Larry has his mission: He needs to get the girls’ resumes from the office and head out to conduct these auditions. The game lets the player decide which woman to visit first, which at the end of the day makes no difference but gives a little feeling of autonomy. I have played through this game relatively recently (three years ago, or so), and can tell you that it’ll go pretty quick, mainly because you cannot die or get dead-ended. That’s right! This game has anti-Sierra logic. Does this make it too easy to be fun, or will the jokes outweigh the hand-holding? We’ll figure this out when it comes to the PISSED rating. For now, Larry needs to poke around the PornProd Corp. office, get the resumes, and figure out where the charger to this stupid camera is, as the battery is currently dead.

It’s also worth noting that, during this introductory sequence—one of the most enjoyable in a Sierra game, I have to add—the game gives the player a choice of password protecting the game. This is obviously a parental control that the designers figured may be harder to crack than the quizzes in Larrys 1 and 3 or the copy protection in Larry 2 (don’t worry: This game has copy protection as well). I obviously didn’t activate the password feature, but check out the folder for a cool little inside joke. 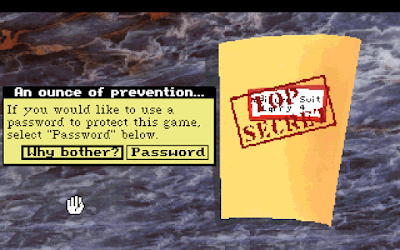