By Ilmari
Last time, I had just been locked out of the house, with no apparent way back in. I started from the backyard, which contained the simple bowling minigame above and a garden with some fun animations.Also located in the backyard was a treehouse, where I found a measuring spoon.Intermission

We stop the regular blog text with a report on the annual Tedolympics! Our first clip comes from figure skateboarding contest, won for a third time in a row by Fatty Bear, with his “Skateboard like Egyptian” performance. 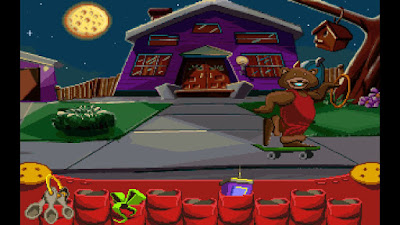 Now back to our regular blogging!

With backyard fully covered, I moved to check the front of the house. I spotted the garage, which opened up with my remote controller. Within I found an enormous sack of sugar.Trying the front door of the house, I was told that Fatty could crawl in, using the cat door. Clearly, I hadn’t been dead ended (and Fatty exercises more than Winnie the Pooh).

I found myself in a living room, with stairs going up to the floor where I began the game, and a door to the kitchen. Living room itself was just filler, with things like an answering machine with a message from Kayla’s dad about a puppy he had bought, an aquarium full of fish and a piano.Entering the kitchen, I met the bunny from Kayla’s room. Fatty proceeded to put the ingredients he had found on the kitchen table, where I also found the recipe for the cake I was supposed to bake.Checking the cupboards, I acquired vanilla extract, baking powder and chocolate chips. In another cupboard, I found a mixing bowl, a measuring can and a mixer. Within the fridge, I discovered milk, butter, bone and cheese.

With all the necessary ingredients and tools in my possession, I proceeded to bake the cake. Fatty sang “I am baking a birthday cake, for Kayla’s birthday party”, his bunny friend put the product in the oven, and I had a chance to decorate the result. In case I wanted, I could have baked another cake, but I decided not to.

On the kitchen floor I saw a present to Kayla. When I clicked the present, Fatty opened it and out came a puppy. Really, Kayla’s parents were planning to keep a dog locked in a tiny box for who knows how many hours? Aren’t there laws against such cruel behaviour?As was to be expected, the puppy was quite delighted of its newfound freedom and escaped. Grudgingly, I obeyed the wishes of the game and went looking for the dog. I found it digging in the garden.

While it was easy to lure the dog with a bone, Fatty still didn’t want to put it back in the box, not because he understood how wrong it was, but because the dog was dirty. I took the dog to the bathroom and gave it a bath. Then I could lock the poor thing back in its confinement and decorate this place of torture with a nice ribbon. Good job, Fatty!

Since I now had some cheese, I checked the door that was locked by a mouse. The mouse was happy to switch the key with the cheese, and now I could open the way to attic, where I could try different outfits for Fatty, mixing different headgear with different suit tops and suit bottoms.


Checking out Kayla’s room, I was tasked to blow five balloons and to find out missing letters from a birthday sign that the puppy had messed. Neither of these tasks was really difficult, although the latter was quite boring, requiring me to check almost every room to see whether it contained a letter.With all the letters back in place, sun went up and Fatty Bear turned magically back into a mere toy. Kayla’s dad woke up and gave her the puppy as a gift. The end!
Posted by Ilmari Jauhiainen at 00:00