When I reviewed Putt Putt Joins the Parade, I was a bit anxious whether I could rate a children’s game fairly. With one Humongous game already under my belt, I think I have a better grasp on what works and what doesn’t in these games. Let’s see if teddy power beats an automobile!
Puzzles and Solvability

Checking a walkthrough afterwards, I noticed that Fatty Bear had some variety not present in the first Putt Putt. For instance, depending on whether I tried to pick up the chocolate chips before releasing the puppy or not, the dog might have snatched the chips and I would have had to find them. I think this gives enough variety for the puzzles that I can bump the puzzle score a bit up. Still, since the puzzles were fairly pedestrian, it won’t be a large bump.Score: 3.

Although the inventory looks a bit different from the one in Putt-Putt (Fatty’s trousers replacing Putt Putt’s dashboard), it is essentially the same interface - easy to use and simple to learn. I’ll deduct one point for the interface of the piano minigame, which I thought was a bit too cumbersome.Score: 5.

I criticised first Putt Putt for the shallowness of its plot. Fatty Bear is again little more than a fetch quest, but it does have few plot reversals (Fatty dropping through the laundry chute and the escape of the puppy), so it deserves another point.Score: 3.

Humongous games have all had the same cosy graphical style, with lot of bright colours and friendly faces. Although it might be far from art, it’s still comforting to look at and well suited for the target audience. I have a hard time remembering anything about the music or sound effects, which implies they were mostly non-existent.Score: 4.
Environment and Atmosphere

Although I am definitely over the intended player age group, I enjoyed Fatty Bear immensely. I applauded the fun animations with Putt Putt, but now I’ll have to add yet another point for the nice minigames.Score: 8.

Scott Burns is a lot better choice for the protagonist voice than that whiny kid, who played Putt Putt. Although the acting is thus competent, there isn’t that much of interesting dialogue to go with it.Score: 5. 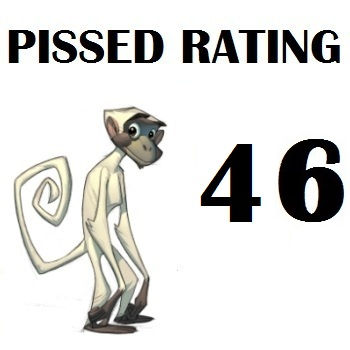 Somewhat surprisingly, we have three people with the closest score guess, Joe, MorpheusKitami and Vetinari, all having chosen 35. Congratulations to all of them!
CAP Distribution
100 CAPs to Ilmari
60 CAPs for Joe Pranevich
25 CAPs for Canageek
16 CAPs for MorpheusKitami
14 CAPs for Lisa H.
10 CAPs for Vetinari
7 CAPs for Kirinn
7 CAPs for Agrivar
7 CAPs for Laukku
4 CAPs for ATMachine
4 CAPs for Gareth
Posted by Ilmari Jauhiainen at 00:00