By Ilmari
Even with the risk of a righteous commenter, hidden behind the heroic disguise of anonymity naming me a social justice warrior, I declare that representation in computer games is an important issue.
Why is it an important issue? Simply put, an important part in people appreciating any form of media is that consumers can find characters they can relate to. If some people do not find any relatable characters in games - say, because all protagonists look like they were brothers of one family, to which they do not belong - they are more likely to find games off-putting and alienating. The solution for this problem is rather easy: just include a wide variety of characters - brothers and even sisters of many different families - in games of different sorts, especially as protagonists. This seems so simple thing to do that it feels strange what reasonable objection anyone would have to it:
The reason why I am speaking about representation right now could be summarised with the following picture. Fatty Bear’s adventures happen in a house owned by Afro-Americans. Here we see Kayla, a child, and a moment ago her dad appeared on the screen. And that’s it, that’s all the human characters in the game. This might not be as revolutionary moment as seeing the Huxtable family on TV in eighties, but it still got me thinking: how many unstereotypical non-white characters we’ve already met in our adventuring journey?

I am really struggling to remember any from Lucasfilm games. Maniac Mansion had film student Michael as a playable character, but otherwise I am not remembering others. Well, Indiana Jones games had few Arabs and Zak McCracken might have met some jungle tribe, but these were not very full characters. With Sierra games we’ve had more variety. I can’t remember any examples from King’s or Space Quest, and Al Lowe games might be best left untouched, but Police Quests have had black police chiefs and Quest for Glory -games had its Simbani characters. But the best games on this account have been those of Coktel Vision, in which Muriel Tramis included many Caribbean characters. Feel free to add other examples in the comments, especially if you remember any clear non-white protagonists!In a common enough trope, Fatty Bear, and all the other toys of the house, come to life only when the humans are sleeping. This time they have a mission: Kayla is about to have her birthday, and they need to prepare the festivities for the coming day. This sounds a bit awkward: won’t the parents wonder who did it all? In any case, Fatty Bear’s task is to make a birthday cake and to find some ribbon for Kayla’s present. 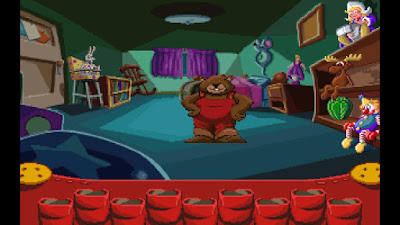 Interface is pretty much the same as in Putt-Putt Joins the Parade, the only difference being that Putt-Putt’s dashboard is replaced by an enlarged picture of Fatty Bear’s pants, with little pockets for all the inventory items.

Adventure starts in Kayla’s room, where Fatty can chat with Gretchen the doll, who will remind Fatty of his mission, and with a rabbit, who uses his ears to fly to kitchen, in order to help Fatty do the birthday cake. Other than that there’s really nothing except some fun animations to watch.
Opening the door led me to an upstairs hall, with four new doors to open and stairs to go down.Starting with that door, I couldn’t open it, because a mouse had locked it. I bet I am supposed to find some cheese for the little guy.

Behind the door next to Kayla’s room I found some kind of home office, with a bookshelf (full of flying books) and a desk with a computer. The room appeared to be complete filler, with nothing but animations to watch.Behind the next door I found Kayla’s parents sleeping in their bedroom. In addition to some funny animations - like a pair of dancing dressing gowns - I managed to sneak in their wardrobe.Kayla’s parents used the wardrobe for storing all kinds of junk, in addition to clothes (space is at premium, when you have kids). Specifically, there was a small trampoline, and by climbing on top of a stack of boxes and jumping on it, Fatty could fly to a lamp and grab some ribbon from top shelf. One task performed!

Feeling good about my progress, I checked the final door, which led to the bathroom. I began my usual methodical clicking of all the hotspots, but after a singing shower I hit something unexpected.After a trip through a laundry chute, I found myself in the basement. On the floor I saw a remote control, which I took in my possession. With nothing else of use to do and with no other exit in my reach, I climbed the ladder outside. 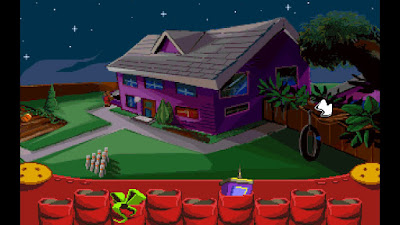 Fatty Bear noted that the door to the basement could not be opened from outside and that he wasn’t sure how to get inside the house. I am pretty sure that there’s a zero chance of locking myself in a dead end in this game, but since this is probably the closest thing to a cliffhanger, I’ll take a break and leave you in suspense. See you in a couple of days!
Posted by Ilmari Jauhiainen at 00:00