Written by Zenic Reverie
Judging by its cover I wouldn’t have given it a chance. I’m not really a fan of horror, and Veil of Darkness suggests it’ll fall in that vein (not my pun). That is, until I saw the SSI logo at the bottom. Knowing them most favorably from their gold box series; I’d probably overlook that it was merely published by them and given the back of the box a look. Of course, I’m ignoring the fact that in 1993 I’d have been deeply engrossed in my growing SNES library.

The dissuasive note in that red circle would have been enough to set the box back down, but not today, not now. We have the promise of riddles to solve and dark secrets to uncover in this hybrid adventure-action-RPG experience that uses a “Real Time Visual point-and-click interface” (whatever that last part means; I suppose the mouse might have been a new feature for PC games of the era).

Taking notice of Event Horizon Software for the first time on the box (and first screen as I boot the game), I felt like I’ve heard that name before. In fact, I had from reading about their past games on CRPG Addict’s blog, and this one too, it so happens, is on his list though I wonder if it will pass muster as an RPG. Their past games were all RPG enough (DarkSpyre, Dusk of the Gods, and The Summoning), and future games by the team lean back heavily in that direction. So, it’s interesting to look deeper into why this game might lean more on the adventure side of gaming. 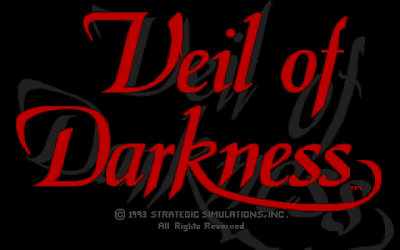 Event Horizon Software was founded by two ex-Paragon Software Corp. employees, Thomas J. Holmes and Christopher L. Straka, and James Namestka who doesn’t have any game credits prior that I can find. Holmes and Straka had previous experience working together on MegaTraveller 1: The Zhodani Conspiracy (a top-down RPG also covered by Chet) and Twilight’s Ransom (a text-based adventure that has yet to make it to the missed classic list). Maybe it’s their work on Twilight’s Ransom or a desire to tell a story of intrigue that leads them on the adventure path.

With a prelude that takes up half the 64 pages of the manual, a story is definitely one thing the game is attempting to dress up. The writer, Scot Noel, gave the same treatment to the manual of their previous title. I’ll try to summarize:

Kairn, fifth of seven sons to the Lord of Csarda, Nikolae, loved a woman (Deanna) from a lesser family. While off to meet her one day (a book of poems in hand to teach her how to read), his father and brothers were already at her house—had slaughtered her family—killed her in front of Kairn, then fed her blood to him while he blacked out in grief. When he awoke, something within Kairn had changed, nay everything had changed.

Kairn regained consciousness at his family’s keep. He was drawn back to the library where he had seen a cursed book, the Agrippa. The old librarian Funar had been killed for betraying the lord’s wishes, aiding Kairn with the love poems. Taken by the curse, Kairn had visions of his brother Aleksander dying at the hands of a stranger in the night, one Kairn seemed to share a consciousness. In the morning, he attacked his father, and while easily could have killed him, decided to have him suffer as he hunted down the rest of this brothers over the coming years.

“Unconsciously, it began. One by one, sometimes centuries apart, Kairn would lure brave men into the valley. He challenged those few who might at last set him on the road to hell. But none, it seemed, proved ever more than diversions. From their agony he gleaned but the joy of brief and deadly games. . . .”

The game begins with the main character (unnamed) flying a freight plane over some unidentified area of Romania. Far below, Kairn brings to him another adventurer. Bats fly into the engines and bring the plane down in a fiery crash. Before passing out, the main character stumbles away from the wreckage barely singed yet badly cut and bruised. Two shadowy figures arrive and carry the body back towards a small village.

I named the main character Engatz after waking up in the company of Deirdre, whose father was the one that carried me to the room where I woke. Deirdre’s father requested to speak to me as soon as I regained consciousness, though Deirdre wasn’t much help with where to find him.


Following directions over an NPC gives me the impression that other characters don’t move, but I guess we’ll see if that holds up. Of course, enemies will probably move around the screen as combat is purported to have action instead of a turn-based experience. Before exiting the room, we must make a choice for combat. The game offers full, simplified, and easy combat options, which remain locked in for the remainder of the game. I’m leaning towards full, which the manual describes as requiring specific objects to overcome certain foes. Simplified removes the need, making the objects give additional bonuses. Easy seems to completely negate the challenge of combat completely, though it’s still included.

Note Regarding Spoilers and Companion Assist Points: There's a set of rules regarding spoilers and companion assist points. Please read it here before making any comments that could be considered a spoiler in any way. The short of it is that no CAPs will be given for hints or spoilers given in advance of me requiring one. As this is an introduction post, it's an opportunity for readers to bet 10 CAPs (only if they already have them) that I won't be able to solve a puzzle without putting in an official Request for Assistance: remember to use ROT13 for betting. If you get it right, you will be rewarded with 50 CAPs in return. It's also your chance to predict what the final rating will be for the game. Voters can predict whatever score they want, regardless of whether someone else has already chosen it. All correct (or nearest) votes will go into a draw.
Posted by TBD at 23:00