Hector’s Journal #2: "You've heard the story before. The slave who became a general... or was it the other way around? Either way, I keep improving my station through means having nothing to do with my skills. Let's see if I can keep this going – if I do, I could even be Emperor one day!"

When last we looked in on Hector the slave owner, he'd failed multiple times at having his slave win a gladiatorial battle. So without having any better ideas, I kept trying...

Reloading after not having played the game for a few days, I'd forgotten I'd saved the game after already owning a slave so accidentally bought a different slave.

Let's take a look at my inventory...


Well, I've now got two slaves and 25 sesterces. I still owe the moneylender 60 sesterces and need some amount more than 40 to bribe my way into the Palace. So let's see if we can win a fight at the arena now. Maybe Billius and Barbarus can be the first ever tag-team.

On my first attempt, both Billius and Barbarus died to Ignominius' sword.

But I kept trying. After another loss, my fight was against Lurkio instead of Ignominius. I remember Lurkio being bad at fighting before, so felt my chances were good.


Well, it was much easier against Lurkio. I'm glad I'll never have to fight the unbeatable Ignominius. Let's see who wants to challenge the new champion, Billius...


Billius died, then I entered Barbarus, who also died. 65 sesterces still wasn't enough to bribe the palace guard, so it was back to the drawing board.

I'd saved after Billius won the first fight, so just kept quitting the game and reloading (the game won't let me load within the game so I have to quit without saving, then restart the game in order to do the equivalent of a LOAD command.)


Well, I didn't know how to withdraw Billius from the competition so a new challenger, Lecherus, killed him in the next fight. I still had 105 sesterces, and Billius had only cost me 5 so I leave as the soldiers take Billius' body away. I'll be sure to say something good about him for my eulogy - he did make me a profit of 75 sesterces, after all.


ECONOMIC ADVICE: If you reload and save-scum enough, slaves have a very good ROI.

Anyway, now that I'm richer, the palace guard will let me in for 80 sesterces.


While talking to the Emperor, I now have a WARN option in my DO menu, so I use it.

After I warn him about Fellonius' murder plot, I get a little cutscene.


I'm immediately given a commission as a Centurion. I'm sent to the rain-soaked land of Britannia, which, while currently part of the Roman Empire, has been somewhat retaken by a rebellious tribe of Celts.


Oh dear. I'm now in a Real Time Strategy game. Now, it's time to admit that RTS games are not one of my favourite genres. I like city building games like Pharaoh and Emperor, but get bored with the fighting parts. I hate controlling armies and having to carefully use the best strategies in order to succeed. And there aren't any difficulty settings in this game so it looks like I'm stuck. Sigh.

As the only part of RTS games I like is building things, I choose to build a fort on the beach we start at.


The way this section of the game works is we need to conquer this land by taking the enemy standard. Basically, it's a 'Capture the Flag' game. Exactly how taking a flag determines which government controls your country isn't made clear, but it's no more ridiculous than watery tarts distributing swords, so I'll let it pass.

First, let's look at some of the features of this new interface by detailing the buttons on the left of the screen.

UNIT
These buttons let us control each of our IV legions separately, or just use them all together with the ALL button. I did some things early on by getting different units to do things, but quickly got everyone killed by splitting my army so only used the ALL button for most of the game.


FORM
The form command simply lets you line up your soldiers in the direction you choose. I can have my units form up in orderly rows to the north, south east or west. I found this useful when entering a choke-point, such as a bridge that I suspected Celts to be amassing behind. But I mostly didn't use this, not knowing where the bad guys were until they were already running at us.


ORDER
I can give lots of orders. While I tested out all those possible commands, I basically used a total of four of them. 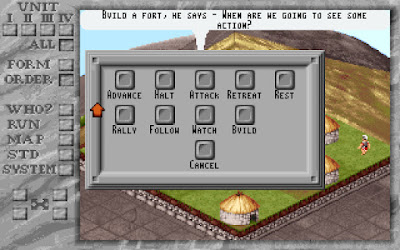 WHO?
This gives me details on whichever soldier I click on.

RUN
This works the same way as in the cities. Run only works for me though, so if I have soldiers following me they lag behind very quickly. A useless command in this section. 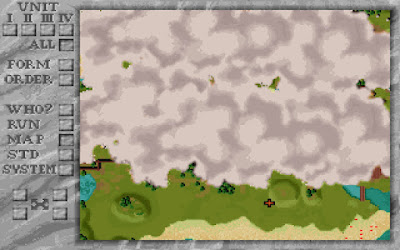 The map starts in a fog of war. The red dots in the bottom right are my soldiers. I can move the red cross wherever I want and Hector will pathfind there. You can see the southern wall of one of the villages at the middle left.

STD
This just lets me drop or pick up my standard (flag.) I can put it somewhere and at any point have the soldiers rally or retreat to it, but in reality I just kept it with me at all times except when I accidentally dropped it somewhere.

SYSTEM
This also works the same as the city levels, which lets me quit (with or without saving) or restart the level or game.


Anyway, I start off by just having all soldiers follow me as I walk around looking for some Celts to kill.


When I meet some British soldiers, I try the complicated battle tactics of screaming at everyone to do the bleeding obvious.

After a short fight, we lose. I lose a lot in this game. The dodgy pathfinding I've found so far in this game doesn't belong solely to Hector. When I order my troops to attack, a number of them run off in random directions rather than where the obvious enemies are. Perhaps they want to take the long way around? Partly due to this, but mostly due to my general lack of skill and tactics, I die a lot. Whenever I die, I get an end screen and am told how I am to be killed.


There are a few villages on the map that I can attack. 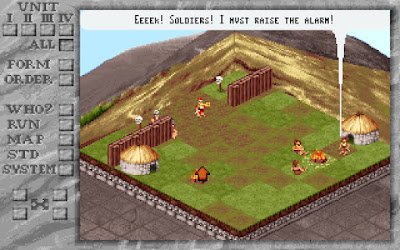 And sometimes the game's stupid pathfinding makes me restart the entire chapter because it sucks. 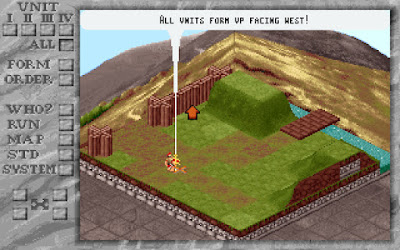 And sometimes weird things happen, and all the Celts seem to be sitting down nursing a grazed knee or something.


Now, as I mentioned, I died a lot in this part. I'll admit that after many deaths I looked up a walkthrough for this stupid strategy section - I hope you don't mind. I was really getting frustrated and had no desire to fully learn a system I wasn't having fun playing. By cheating in this manner, I read that if I enter the huts I can actually make some cash which will apparently be useful in the future.


The walkthrough also gave me lots of tactics, and the advice to take all the villages before going for the standard, as I might need the money later.

But I couldn't be bothered with all that, so after resorting to a walkthrough, I largely ignored it, and just kept restarting, ordering my entire army to follow me, and aiming straight for the main village in the north, almost always getting myself and my army killed before reaching the village.

Eventually, after many tries, I win the battle and me and my remaining 4 soldiers take the British Standard.


I return to Rome as a victorious General.

And as such a victor, the Emperor gives me another promotion.


The crowd gives me a round of applause, and I get ready to start my new job. I notice that Barbarus is still following me around. I'm glad he found me after I arrived back from Britain.

And after that ordeal in Britain (I mean MY ordeal, not Hector's) I think it's time to take a break for now. At the start of this section I thought I was travelling a similar career path as Maximus from the movie, Gladiator. Now that I'm a Senator I'm wondering if I'm following the path of a different movie character.


Session time: 2 hours 30 minutes (I swear it felt like I was playing that RTS section for much longer)
Total time: 5 hours 35 minutes
Inventory: 85 sesterces, Barbarus
Posted by TBD at 23:59